Nikola Tesla: The Genius Who Lit the World 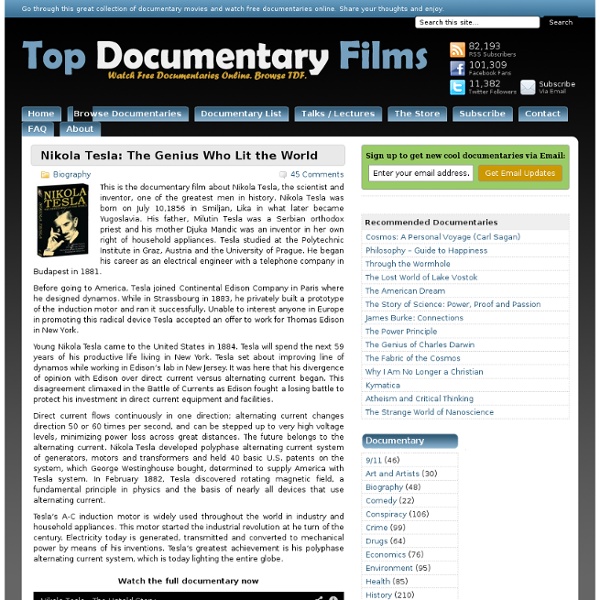 This is the documentary film about Nikola Tesla, the scientist and inventor, one of the greatest men in history. Nikola Tesla was born on July 10,1856 in Smiljan, Lika in what later became Yugoslavia. His father, Milutin Tesla was a Serbian orthodox priest and his mother Djuka Mandic was an inventor in her own right of household appliances. Before going to America, Tesla joined Continental Edison Company in Paris where he designed dynamos. Young Nikola Tesla came to the United States in 1884. Direct current flows continuously in one direction; alternating current changes direction 50 or 60 times per second, and can be stepped up to very high voltage levels, minimizing power loss across great distances. Tesla's A-C induction motor is widely used throughout the world in industry and household appliances. Watch the full documentary now

Tesla's Egg of Columbus World's Fair: Columbian Exposition Tesla presentation, 1893 Nikola Tesla, at the 1893 World's Columbian Exposition,[1] demonstrated a device he constructed known as the "Egg of Columbus." It was used to demonstrate and explain the principles of the rotating magnetic field model and the induction motor. Tesla's Egg of Columbus performed the feat of Columbus with a copper egg in a rotating magnetic field. Tesla's device used a toroidal iron core stator on which four electromagnetic coils were wound. References[edit] External links[edit] What Did Nikola Tesla Invent?

/money-banking/ Thomas Jefferson and Andrew Jackson understood The Monster. But to most Americans today, Federal Reserve is just a name on the dollar bill. They have no idea of what the central bank does to the economy, or to their own economic lives; of how and why it was founded and operates; or of the sound money and banking that could end the statism, inflation, and business cycles that the Fed generates. Dedicated to Murray N. Alan Greenspan is not, we're told, happy about this 42-minute blockbuster. Watch the full documentary now /on-piracy/ Each day, millions of youths from Canada and around the world download music and movies off of the Internet. This epidemic of unauthorized downloading has been cited by the record and film industries as being the prime cause for billions in losses. Politicians have come under tremendous pressure to pass legislation on the issue. But despite all the media frenzy on the piracy crackdowns, there's been very little attention to the topic itself. At the very best, news reporters regurgitated the contents of an industry press release. There was nothing of substance, which is where this documentary fits in: we wanted to cover the issue in-depth. We interviewed industry execs, copyright lawyers, pirates, consumers, artists, and everyone we could think of - and made you this film. This documentary is available for preview only - .

/martin-luther/ Few if any men have changed the course of history like Martin Luther. In less than ten years, this fevered German monk plunged a knife into the heart of an empire that had ruled for a thousand years, and set in motion a train of revolution, war and conflict that would reshape Western civilization, and lift it out of the Dark Ages. Luther's is a drama that still resonates half a millennium on. It's an epic tale that stretches from the gilded corridors of the Vatican to the weathered church door of a small South German town; from the barbarous pyres of heretics to the technological triumph of printing. But this is also an intensely human tale, a story that hurtles from the depths of despair to the heights of triumph and back again. Watch the full documentary now

/perfect-murder/ Modern forensic science should make it impossible to commit murder and get away with it. But how easy would it be to outfox the detectives? With the help of top forensic scientists, and real-life murder investigations, we explore whether it's possible to commit a perfect murder. The body is the most important piece of evidence in any murder. Pathologist Dr Richard Shepherd reveals the crucial clues that give away the secrets of a suspicious death. Dr Lee Goff can work out a time of death from just a few maggots on a corpse. And what is the perfect murder weapon? Watch the full documentary now -

/perfect-vagina/ What began as a wander through the wacky world of genital plastic surgery became a passionate documentary about modern femininity, The Perfect Vagina. After My Penis And Everyone Else's, it's now time to look at women's insecurities. Women are undergoing surgery to create perfect genitalia amid a "shocking" lack of information on the potential risks of the procedure, a report says. Research published in the British Journal of Obstetrics and Gynecology also questions the very notion of aesthetically pleasing genitals. Operations to improve the appearance of the sex organs for both psychological and physical reasons are on the rise. Labioplasty, as it is known, costs about £3,000 privately and is offered for a variety of reasons: some women complain that wearing tight clothes or riding a bike is uncomfortable, while others say they are embarrassed in front of a sexual partner. Watch the full documentary now -

/machine-that-made-us/ Home » Technology 10 Comments The Machine That Made Us is a documentary in which Stephen Fry examines the story behind the first media entrepreneur, printing press inventor Johann Gutenberg, to find out why he did it and how, a story which involves both historical inquiry and hands-on craft and technology. Fry travels across Europe to find out how Gutenberg kept his development work secret, about the role of avaricious investors and unscrupulous competitors and why Gutenberg's approach started a cultural revolution. He then sets about building a copy of Gutenberg's press. Watch the full documentary now (playlist - 1 hour) Share this film on: FacebookTwitterGoogle+234 Ratings: 9.08/10 from 25 users. More great documentaries: by Taboolaby Taboola Sponsored LinksSponsored Links Promoted LinksPromoted Links From The Web ViralScape 17 Extreme Selfies That Are Not For The Faint-HeartedViralScape Undo My Snoring Solution One Weird Trick To Stop SnoringMy Snoring Solution OurCrowd Fat Burning Kitchen Guide Book

/phoenix-strangler/ Sipho Agmatir Thwala was South Africa’s Phoenix Strangler. Although he only operated for the relatively short period of a year from 1996 to 1997 he was to make it a terrifying year for KwaZulu-Natal province and rapidly became the most wanted man in the region. His MO was straightforward – he would lure women to sugar cane fields with the promise of work before raping and strangling them with their own underwear, then bury them in shallow graves. Thwala appeared normal around his family and was above average intelligence. He was arrested in 1997 after police matched DNA found on the victims to DNA taken from Thwala several years earlier when he was arrested for rape, though he was later acquitted of those charges. On 31 March 1999, Thwala was found guilty of 16 murders and 10 rapes, and sentenced to 506 years in prison. This documentary is available for preview only.

/kings-from-babylon-to-baghdad/ The region now known as Iraq has always been, in many ways, world history's ground zero. From this rich territory sprang the earliest cities and empires, earliest armies, and earliest tyrants. The Kings: From Babylon To Baghdad tells the story of Iraq through the history of its rulers, from Sargon the Great to Saddam Hussein. This feature-length documentary explores the connections and relevance between ancient and modern Iraq and between Iraq and the rest of the planet. Using dialogue drawn directly from primary sources - original texts of ancient records - it depicts events in dramatic, living reenactments. Lush cinematography filmed on location frames the dramatizations and contemporary reportage. Today, as it has been many times in the past, understanding Iraq is central to the world's well-being. Watch the full documentary now (playlist - 1 hour, 14 minutes)

/portrait-of-paul-erdos/ In an age when genius is a mere commodity, it is useful to look at a person who led a rich life without the traditional trappings of success. A man with no home and no job, Paul Erdös was the most prolific mathematician who ever lived. Born in Hungary in 1913, Erdös wrote and co-authored over 1,500 papers and pioneered several fields in theoretical mathematics. The film opens at Cambridge University's 1991 honorary doctorate ceremony, where Erdös received an award he says he would gladly trade for a "nice new proof." The structure of N is a Number is based on Erdös's 50 years of perpetual wandering, "like a bumblebee," carrying news and mathematical information from university to university. N is a Number is a one-hour 16mm documentary filmed over a four-year period in four countries between 1988 and 1991. Watch the full documentary now (playlist - 58 minutes)