Elon Musk Just Made It Way Cheaper To Live Off Solar Power. SolarCity Outfitting your home with cheap solar power just got a lot easier. 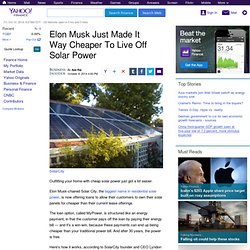 Elon Musk-chaired Solar City, the biggest name in residential solar power, is now offering loans to allow their customers to own their solar panels for cheaper than their current lease offerings. The loan option, called MyPower, is structured like an energy payment, in that the customer pays off the loan by paying their energy bill — and it's a win-win, because these payments can end up being cheaper than your traditional power bill. And after 30 years, the power is free. 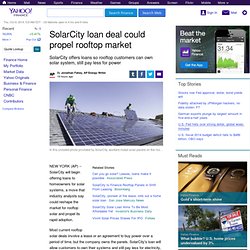 Most current rooftop solar deals involve a lease or an agreement to buy power over a period of time, but the company owns the panels. SolarCity's loan will allow customers to own their systems and still pay less for electricity, a simpler and cheaper prospect. "The value proposition is becoming clearer and less complicated for consumers," says Patrick Jobin, an analyst at Credit Suisse. "Solar is going mainstream. " Other solar companies have begun to offer loans in recent months, but SolarCity Corp. is the nation's biggest installer, and its loan has a twist that may convince reluctant customers to sign up: The customer pays the loan back based only on the electricity that the panels produce. SolarCity breaks ground on huge solar factory in New York, strikes deal with state. SolarCity broke ground on its massive solar panel manufacturing facility in Buffalo, New York on Tuesday, according to a release from New York Governor Andrew Cuomo. 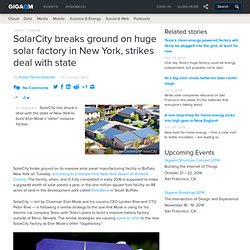 The facility, when, and if, fully completed in early 2016 is supposed to make a gigawatt worth of solar panels a year, in the one million square foot facility on 88 acres of land in the development park called RiverBend in South Buffalo. SolarCity — led by Chairman Elon Musk and his cousins CEO Lyndon Rive and CTO Peter Rive — is following a similar strategy to the one that Musk is using for his electric car company Tesla, with Tesla’s plans to build a massive battery factory outside of Reno, Nevada. The similar strategies are causing some to refer to the new SolarCity factory as Elon Musk’s other “Gigafactory.” Every SolarCity Customer Will Get Battery Backup Within 5-10 Years. September 22nd, 2014 by Zachary Shahan Planetsave. 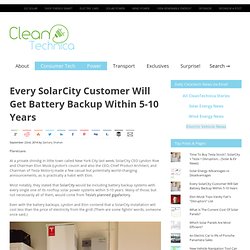 At a private shindig in little town called New York City last week, SolarCity CEO Lyndon Rive and Chairman Elon Musk (Lyndon’s cousin and also the CEO, Chief Product Architect, and Chairman of Tesla Motors) made a few casual but potentially world-changing announcements, as is practically a habit with Elon. Most notably, they stated that SolarCity would be including battery backup systems with every single one of its rooftop solar power systems within 5-10 years. Elon Musk: A thermostat-sized box may one day power your house. NEW YORK (MarketWatch) — It’s easy to get lost in the numbers that swirl around a project as massive as Tesla’s $5 billion gigafactory. 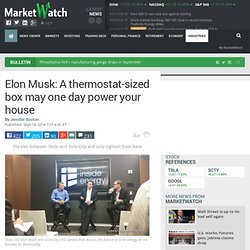 But by sitting back and looking outside of the box, the potential ground-level benefits of such an immense factory begin to set in. The numbers might make you woozy: a $5 billion investment, a $1.25 billion tax break in Nevada, 6,500 new jobs, 50 gigawatts of battery storage by 2020, 500,000 electric cars per year. What this really means is the massive factory -- which Tesla Motors Inc. Panasonic Agrees to Help Tesla Build Battery ‘Gigafactory’ Tesla signs $200-300 million deal with Panasonic on battery Gigafactory. One step closer to construction Ever since Tesla unveiled its plans to build a battery Gigafactory that would produce as many lithium-ion cells by 2020 as the whole world does now, all eyes have been on the company to see if they can really pull it off (their track record says 'yes', but you never know). 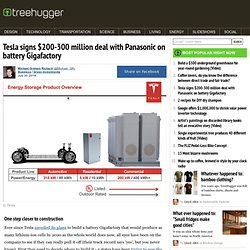 First they need to decide where to build it - 5 states have been trying to woo the company - and get partners to help with financing. The project is expected to cost around $5 billion and create 6,500 jobs, so while Tesla has a couple billions in the bank, it'll need some help. Tesla/Screen capture That's where the Panasonic agreement comes in. Panasonic's investment is speculated to eventually reach about $1 billion, so Tesla will need other partners to complete the financing of the project. The Gigafactory won't go from 0% capacity to 100% all at once, though. Solar at Scale. By Elon Musk, Peter Rive and Lyndon Rive SolarCity has signed an agreement to acquire Silevo, a solar panel technology and manufacturing company whose modules have demonstrated a unique combination of high energy output and low cost. 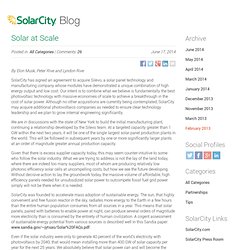 Our intent is to combine what we believe is fundamentally the best photovoltaic technology with massive economies of scale to achieve a breakthrough in the cost of solar power. Although no other acquisitions are currently being contemplated, SolarCity may acquire additional photovoltaics companies as needed to ensure clear technology leadership and we plan to grow internal engineering significantly. We are in discussions with the state of New York to build the initial manufacturing plant, continuing a relationship developed by the Silevo team.

At a targeted capacity greater than 1 GW within the next two years, it will be one of the single largest solar panel production plants in the world. Forward-Looking Statements. Panasonic and Tesla Sign Agreement for the Gigafactory. OSAKA, Japan / PALO ALTO, USA, July 31, 2014 – Panasonic Corporation and Tesla Motors, Inc. have signed an agreement that lays out their cooperation on the construction of a large-scale battery manufacturing plant in the United States, known as the Gigafactory. 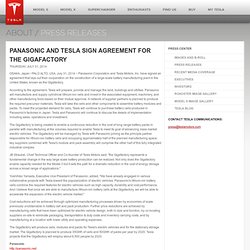 According to the agreement, Tesla will prepare, provide and manage the land, buildings and utilities. Panasonic will manufacture and supply cylindrical lithium-ion cells and invest in the associated equipment, machinery, and other manufacturing tools based on their mutual approval. A network of supplier partners is planned to produce the required precursor materials. Tesla will take the cells and other components to assemble battery modules and packs. What it means for Tesla to be our Car of the Year, and why it matters.

Our selection of the Tesla Model S as Yahoo! 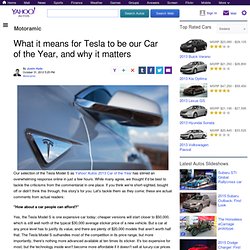 Autos 2013 Car of the Year has stirred an overwhelming response online in just a few hours. While many agree, we thought it'd be best to tackle the criticisms from the commentariat in one place. If you think we're short-sighted, bought off or didn't think this through, this story's for you. Let's tackle them as they come; these are actual comments from actual readers: And Lots of Ways To Spend It - Corporate Intelligence. By Joseph B. White Tesla Motors Inc. TSLA -0.81% just raised about $1 billion in new capital, riding a remarkable burst of investor exuberance. New Tesla shareholders will now get to see just how fast the auto business gobbles up money. After it pays off a $452.4 million federal loan, Tesla says in a filing today that it will have $678.8 million in cash and cash equivalents, and long term debt of $600 million. With that cash, Tesla should be able to complete development of its Model X sport utility, which the company had delayed until the end of next year. 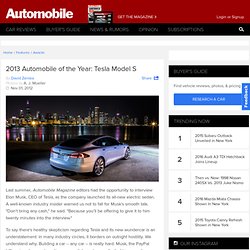 A well-known industry insider warned us not to fall for Musk's smooth talk. "Don't bring any cash," he said. "Because you'll be offering to give it to him twenty minutes into the interview. " SolarCity Will Use Tesla’s Batteries to Store Solar Power. Today, SolarCity—a company that’s grown quickly by installing solar panels for free and charging customers for the solar power—announced a new business that will extend that model to providing batteries for free, too. SolarCity is a rare success story for investors in clean technology, and its business model has sped the adoption of solar panels.

The batteries could help businesses lower their utility bills by reducing the amount of power they draw from the grid. Tesla Motors: Please infringe on our patents for the greater good. Patents no longer hang on the wall of Tesla Motors’ Palo Alto, Calif., headquarters. The change in decor represents a bold, altruistic declaration from the electric car maker, which will permit anyone to use its electric-vehicle technology, patents be damned.