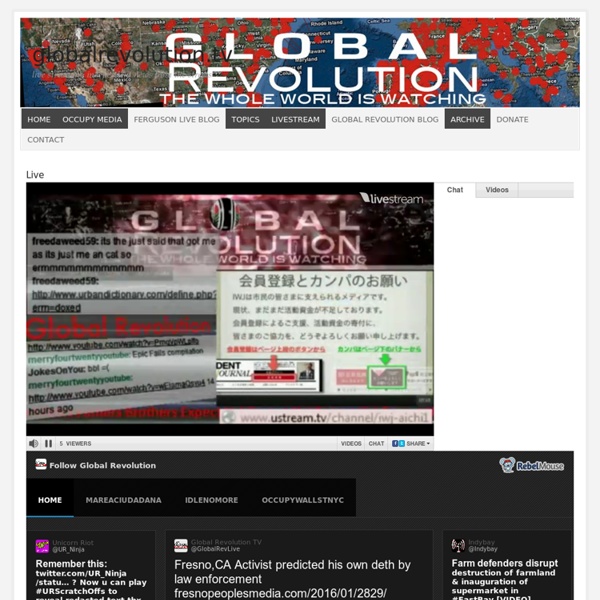 Will Occupy Wall Street Upend Obama’s Presidential Election? Where OWS departs from precedent is in the breadth of support from the get-go for its overarching critique in the electorate at large. A November NBC–Wall Street Journal poll found that more than three quarters of voters agree that America’s economic structure unfairly favors the very rich over everyone else, and that the power of banks and corporations should be constrained. “It took three years from the start of the anti–Vietnam War movement to the point when the popularity of the war sank below 50 percent,” observes Columbia professor and social-movement historian Todd Gitlin. “Here, achieving the equivalent took three minutes.” Capitalizing on this support is the central issue facing OWS, and its ability to do so will depend on myriad factors, including the behavior of plutocrats, politicians, and police.

Fracking In Our Backyard : One Percent for the Planet Through our current campaign, Our Common Waters, and with exposure to increased oil and gas development near our homes and communities, we have grown concerned about hydraulic fracturing (commonly called “fracking”) and its impact on water, air, soil, wildlife habitat, and human health. Over 90% of oil and gas wells in the U.S. use fracking to aid in extraction, and many fracking fluids and chemicals are known toxins for humans and wildlife. For decades, natural gas (methane) deposits were tapped by single wells drilled vertically over large, free-flowing pockets of gas. Then came fracking, a water- and chemical-intensive method that promised the profitable extraction of natural gas trapped in shale. Julian Assange on George Bush's Library and Bradley Manning's Trial I had an opportunity to interview WikiLeaks founder Julian Assange at the Ecuadorian Embassy in London, where he has been granted political asylum since June 2012. Assange is wanted for questioning in Sweden over sex allegations, although he has never been charged. Assange believes that if sent to Sweden, he would be put into prison and then sent to the United States, where he is already being investigated for espionage for publishing hundreds of thousands of classified diplomatic and military memos on the WikiLeaks website. George W. Bush’s new presidential library at Southern Methodist University in Texas has opened with great fanfare, including the attendance of Presidents Obama and former Presidents Carter, Bush Sr. and Clinton.

Call Your Mayor: Complete List of Numbers for Occupied Cities On October 13, I started calling Mayor Bloomberg’s office to protest his threatened attack on Zuccotti Park, and urged others to do the same. Apparently they did, mostly without any urging from me, because the high volume of calls from around the country was credited, by the New York Times, with making the mayor back off. The next day, prompted by reports from occupiers, I used Facebook to tell people to call the mayor of San Diego. Then it occurred to me: We need a list of the phone numbers of the mayors of all the occupied cities.

Obama administration says Constitution protects cell phone recordings The Obama administration has told a federal judge that Baltimore police officers violated the First, Fourth, and Fourteenth Amendments by seizing a man's cell phone and deleting its contents. The deletions were allegedly in retaliation for the man's use of the phone to record the officers' arrest of his friend. According to the Maryland ACLU, this is the first time the Obama Justice Department has weighed in on whether the Constitution protects citizens' right to record the actions of police with their cell phones. Occupy Wall Street's Livestream Operators Arrested - National Occupy Wall Street is in the middle of one of its day-long marches in New York Tuesday, protesting the National Defense Authorization Act, but for those following along on the Global Revolution livestream, the real action is happening in the broadcast studio itself. That's because police have apparently just raided the Brooklyn studio of Globalrevolution.tv and taken some of the project's key volunteers into custody. The raid Tuesday follows a notice to vacate that police delivered to the Bushwick studio on Monday night.

At Occupy Camps, Veterans Bring the Wars Home - Tina Dupuy - Politics Expert at living in tents, some veterans are finding new purpose in the streets We're in a coffee shop near McPherson Square, the location of Occupy DC, and Michael Patterson, 21, and I are having hot cocoa on a cold November night. He's wearing an Iraq Veterans Against the War sweatshirt and baggy shorts. It's freezing outside. "I'm from Alaska," he offers as an explanation. He's been sleeping in a tent in D.C. for over a month now.

Inside Occupy Wall Street’s (Kinda) Secret Media HQ The revolution may never be televised, but if Occupy activists in a semi-secret media war room in New York’s Bowery district have their way, it will be livestreamed. Police seizures at occupations, as at the flagship camp in New York City on Tuesday, not to mention rain, cold and theft, are horrible for expensive media gear, as Occupy Wall Street found after setting up an ad hoc media operation in Manhattan’s Zuccotti Park in September. So Occupy Wall Street decided the best way to keep livestreams of the protests online was to move much of the gear to a safer location somewhere indoors. Wired.com visited the sorta-secret Media HQ in Manhattan last week for the first thorough tour of the facility. The conversations with activists eerily presaged the turmoil in Manhattan Tuesday and in cities like Oakland and Portland over the weekend. The popular all-volunteer operation, originally run from a tent in Zuccotti Park, moved to a narrow room in the A.J.

UC cops' use of batons on Occupy camp questioned A debate over the use of police force has reignited at the UC Berkeley campus after videos surfaced showing officers repeatedly shoving and jabbing screaming students who tried to keep officers from dismantling a nascent Occupy encampment. The videos taken by protesters, journalists and casual observers show UC Berkeley police and Alameda County sheriff's deputies in riot gear ordering students with linked arms to leave a grassy area outside the campus administration building Wednesday. When the students didn't move, police lowered their face shields and began hitting the protesters with batons.

The Occupy Wall Street Bible Is Out, and It's Good - Culture It’s probably no accident that the minimalist brown cover of Occupying Wall Street, the new title from OR Books about the now world-famous Manhattan movement, resembles the posters that, for a few months in 2011, came to define Zuccotti Park’s skyline. The title and subtitle—"The Inside Story of an Action that Changed America"—are written in black scrawl, adding extra authenticity to the stylization. It’s not just a book you’re holding, a reader soon realizes, it’s also a mini-protest sign. Fair warning up front: A little rectangular box on the back cover reads, "All profits from this book will be donated to Occupy Wall Street." If you’re certain you disagree with OWS and don’t want to support their cause, then this book is probably not for you.

Global Revolution HQ raided in Bushwick; 6 Arrested “We can do all of this from laptops”—Vlad Teichberg, GlobalRevolution.TV, after the #OccupyWallStreet and global protest news livestream channel was evicted from its NYC base The Global Revolution collective has been covering Occupy Wall Street via live stream since Day 1. Originally based in Zuccotti Park, Global Revolution’s base of operations have relocated as the Occupy movement’s locations have changed. Most recently, a base of operations was established in Bushwick, Brooklyn, at 13 Thames Street. JAN 2ND, 8PM EST — a notice was posted at the property stating that the production space is “imminently perilous to life,” and adds, “Violators of the Commissioner’s Vacate Order are subject to arrest.” No one else in the building was evicted.

Land Grabs It's not necessarily a problem when wealthy companies invest in agricultural land in poor countries for commercial use. But when families are kicked off the land or less food is grown as a result, that's a very big problem indeed. Recent data indicates that at least 33 million hectares of land deals have been identified since 2001 – an area 8 times the size of the Netherlands. And since the food price spikes of 2008, that's been happening more and more.

#Occupy Denver# on USTREAM Watch without ads Ustream © Search Log in / Sign up With Facebook (faster) Log in or sign up with Facebook See what your friends like and watch, get awesome recommendations Instant login, no passwords by Douglas Rushkoff (written for the human microphone at Zuccotti Park) I am humbled and honored to be amplified by your voices. You are not fighting against people, but against a machine. It was put in place over 500 years ago.