Benefits of this Interactive Textbook — How to Think like a Computer Scientist: Interactive Edition 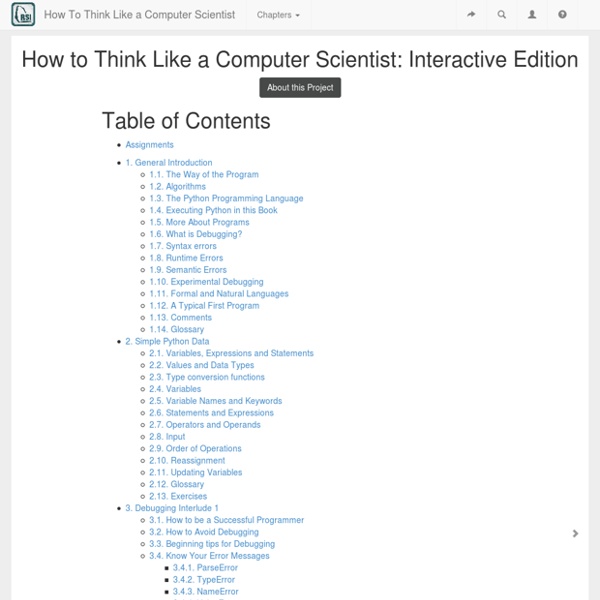 This interactive book is a product of the Runestone Interactive Project at Luther College, led by Brad Miller and David Ranum. There have been many contributors to the project. Our thanks especially to the following: This book is based on the Original work by: Jeffrey Elkner, Allen B. Downey, and Chris MeyersActivecode based on SkulptCodelens based on Online Python TutorMany contributions from the CSLearning4U research group at Georgia Tech.ACM-SIGCSE for the special projects grant that funded our student Isaac Dontje Lindell for the summer of 2013.NSF The Runestone Interactive tools are open source and we encourage you to contact us, or grab a copy from GitHub if you would like to use them to write your own resources.

untitled Python is an interpreted language, this means that your computer does not run Python code natively, but instead we run our code using the Python interpreter. There are two ways in which you can run Python code: Directly typing commands into the interpreterGood for experimenting with the language, and for some interactive workTyping code into a file and then telling the interpreter to run the code from this fileGood for larger programs, and when you want to run the same code repeatedly Installation and quick start — nose 1.3.0 documentation nose extends unittest to make testing easier. On most UNIX-like systems, you’ll probably need to run these commands as root or using sudo. Install nose using setuptools/distribute: Or pip: Or, if you don’t have setuptools/distribute installed, use the download link at right to download the source package, and install it in the normal fashion: Ungzip and untar the source package, cd to the new directory, and: However, please note that without setuptools/distribute installed, you will not be able to use third-party nose plugins.

Hackerspaces and makerspaces: the zen of innovation Ever watched a kid get so excited about something new? That sparkle in the eye and that ‘let me at it’ urgency that we’d like to capture in every learning interaction? I knew you’d understand. That was my experience recently at the Computers in Libraries Conference, Washington DC, after attending a session by Fiacre O’Duin , Librarian, Cyborg, Cult-Leader :-) Top 10 Programming Languages to Learn in 2014 Updated on May 5, 2014 Having spent more than 5 years in software development and the computer programming arena, one of the most common questions I am asked is: This is a question that is asked by beginners, as well as experts. Popular Python recipes Welcome, guest | Sign In | My Account | Store | Cart ActiveState Code » Recipes Languages Tags Authors Sets NOTE: Recipes have moved!

Python Extension Packages for Windows - Christoph Gohlke by Christoph Gohlke, Laboratory for Fluorescence Dynamics, University of California, Irvine. This page provides 32- and 64-bit Windows binaries of many scientific open-source extension packages for the official CPython distribution of the Python programming language. The files are unofficial (meaning: informal, unrecognized, personal, unsupported, no warranty, no liability, provided "as is") and made available for testing and evaluation purposes. If downloads fail reload this page, enable JavaScript, disable download managers, disable proxies, clear cache, and use Firefox. Please only download files manually as needed. Most binaries are built from source code found on PyPI or in the projects public revision control systems.

Android Developer SDK Before installing Android Studio or the standalone SDK tools, you must agree to the following terms and conditions. This is the Android Software Development Kit License Agreement 1. How to Pick the Right Programming Language Adron Hall is the lead developer of cloud solutions at New Relic. During the course of every coding project, a software developer must make dozens of decisions. Sometimes this involves solving a problem unique to a particular domain space or a particular architectural issue. Python Examples On these pages, I have collected a bit of information about the Python programming language, along with a bunch of examples. These might be useful if you want to see some of the features without actually learning the language itself. You don't have to read through all of this in order. Just pick the pages which look most interesting to you. The topics are fairly independent from each other and don't require any existing knowledge about Python.

Twisted Twisted is an event-driven networking engine written in Python and licensed under the open source ​MIT license. Twisted runs on Python 2 and an ever growing subset also works with Python 3. Twisted makes it easy to implement custom network applications. Here's a TCP server that echoes back everything that's written to it: