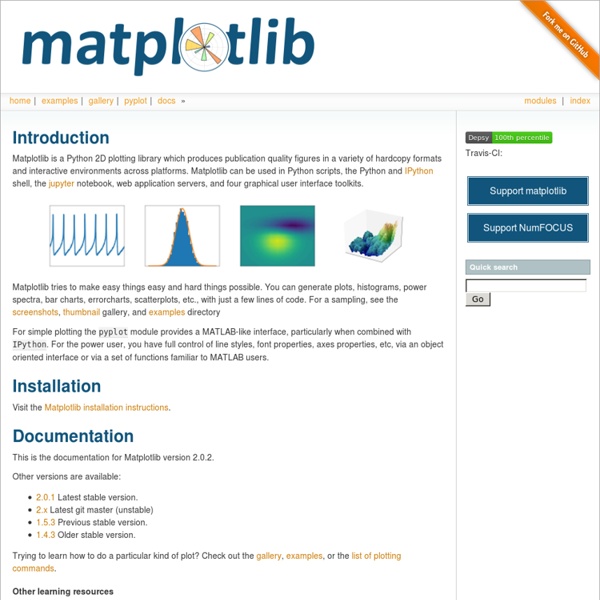 matplotlib is a python 2D plotting library which produces publication quality figures in a variety of hardcopy formats and interactive environments across platforms. matplotlib can be used in python scripts, the python and ipython shell (ala MATLAB®* or Mathematica®†), web application servers, and six graphical user interface toolkits. matplotlib tries to make easy things easy and hard things possible. You can generate plots, histograms, power spectra, bar charts, errorcharts, scatterplots, etc, with just a few lines of code. For a sampling, see the screenshots, thumbnail gallery, and examples directory For example, using "ipython --pylab" to provide an interactive environment, to generate 10,000 gaussian random numbers and plot a histogram with 100 bins, you simply need to type x = randn(10000) hist(x, 100)

Python for Scientists In reaction to several colleagues asking about Python , I thought a webpage would be more useful than giving an exhaustive rundown on Python verbally. Python is a script based language that allows programmers/scientists to get their algorithms and functions working in little or no time. A large number of modules and wrappers are being built for Python, like RPy and Scipy , to allow advanced tools and faster processing speeds to be implemented. Plotting modules and programs are also in wide use among Python users.

Why Should Engineers and Scientists Be Worried About Color? Bernice E. Rogowitzrogowtz@watson.ibm.com Lloyd A. Treinish lloydt@watson.ibm.com IBM Thomas J. Watson Research CenterYorktown Heights, NY Welcome — Theano 0.9.0 documentation Theano is a Python library that allows you to define, optimize, and evaluate mathematical expressions involving multi-dimensional arrays efficiently. Theano features: tight integration with NumPy – Use numpy.ndarray in Theano-compiled functions.transparent use of a GPU – Perform data-intensive computations much faster than on a CPU.efficient symbolic differentiation – Theano does your derivatives for functions with one or many inputs.speed and stability optimizations – Get the right answer for log(1+x) even when x is really tiny.dynamic C code generation – Evaluate expressions faster.extensive unit-testing and self-verification – Detect and diagnose many types of errors. Theano has been powering large-scale computationally intensive scientific investigations since 2007. But it is also approachable enough to be used in the classroom (University of Montreal’s deep learning/machine learning classes). 2017/11/15: Release of Theano 1.0.0.

Open Book Project by Peter Wentworth, Jeffrey Elkner, Allen B. Downey, and Chris Meyers 3rd Edition (last updated 10/6/12)2nd Edition (last updated 4/21/12) What's the difference among these versions? Python/Unix Course Peter Shearer (x42260, pshearer@ucsd.edu) Website for class at We meet MWF from 10 to 10:50 in the IGPP Munk Lab Conference Room. There will be no final. Grades will be based on homework. To participate, you should install on a Mac:gfortran (64-bit version) (also see NetOps wiki) XCode: Macs Developer's environment. Click on the "Mac Dev Center". pylab_examples example code: hyperlinks.py — Matplotlib 1.3.0 documentation Navigation This Page Show Source Quick search Enter search terms or a module, class or function name. 5. Data Structures This chapter describes some things you’ve learned about already in more detail, and adds some new things as well. 5.1. More on Lists The list data type has some more methods. Here are all of the methods of list objects: list.append(x)

NumPy for MATLAB users – Mathesaurus Help Searching available documentation Using interactively Minesweeper in Matplotlib Lately I've been playing around with interactivity in matplotlib. A couple weeks ago, I discussed briefly how to use event callbacks to implement simple 3D visualization and later used this as a base for creating a working 3D Rubik's cube entirely in matplotlib. Today I have a different goal: re-create minesweeper, that ubiquitous single-player puzzle game that most of us will admit to having binged on at least once or twice in their lives.

random — Generate pseudo-random numbers — Python v3.0.1 documentation This module implements pseudo-random number generators for various distributions. For integers, uniform selection from a range. For sequences, uniform selection of a random element, a function to generate a random permutation of a list in-place, and a function for random sampling without replacement. On the real line, there are functions to compute uniform, normal (Gaussian), lognormal, negative exponential, gamma, and beta distributions. For generating distributions of angles, the von Mises distribution is available.

The Python Tutorial — Python v2.7.1 documentation Python is an easy to learn, powerful programming language. It has efficient high-level data structures and a simple but effective approach to object-oriented programming. Python’s elegant syntax and dynamic typing, together with its interpreted nature, make it an ideal language for scripting and rapid application development in many areas on most platforms. Scientific Analysis in Python Python based scientific analysis cookbook James Battat Created: October 3, 2006 Last Modified: July 12, 2010 I find Python very user-friendly. Therefore I often reach for it when tasked to solve small or large scripting problems.