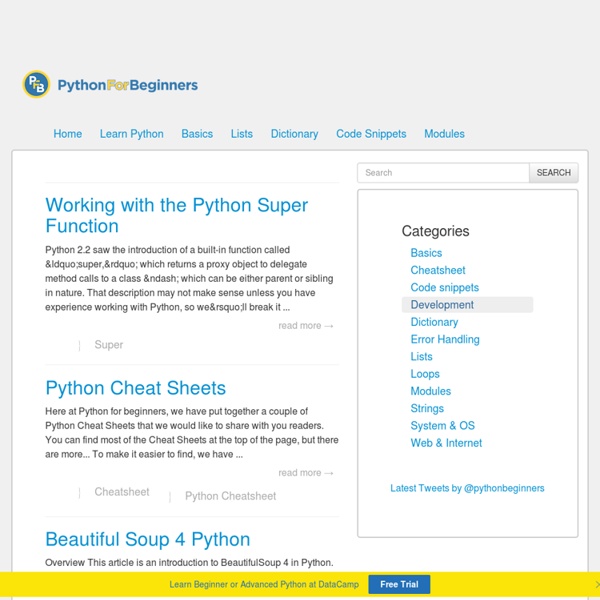 Getting Started With Python For Data Science Who is this for and what will I learn? This tutorial assumes some knowledge of Python and programming, but no knowledge whatsoever of data science, machine learning, or predictive modeling (or, heck, even statistics). To the extent there is a target audience, it's probably hacker types who learn best by doing. All the code from this tutorial is available on github . You might encounter terms you're not familiar with, but that shouldn't stop you from completing the tutorial.

mobile code editor - faq Documentation Installation how to - The download page contains an installation how to. We recomend it to be read first to make sure everything is set correctly. Tutorial - Short tutorial on this page will introduce you to touchqode editor. FAQ - Other questions you may ask are answered in the faq section. TOP 10 FREE PYTHON PDF EBOOKS TO LEARN PYTHON Python is a high level programming language which increasingly popular. I have collected 10 free ebooks for python which contains lots of exercises, practices, example programs and many more. Here I have collected 10 Python ebooks for you which may help you to lean python accordingly. Non-Programmer's Tutorial for Python 3/Print version All example Python source code in this tutorial is granted to the public domain. Therefore you may modify it and relicense it under any license you please. Since you are expected to learn programming, the Creative Commons Attribution-ShareAlike license would require you to keep all programs that are derived from the source code in this tutorial under that license. Since the Python source code is granted to the public domain, that requirement is waived. This tutorial is more or less a conversion of Non-Programmer's Tutorial for Python 2.6. Older versions and some versions in Korean, Spanish, Italian and Greek are available from

Think Python: How to Think Like a Computer Scientist How to Think Like a Computer Scientist by Allen B. Downey This is the first edition of Think Python, which uses Python 2. If you are using Python 3, you might want to use the second edition, which is here. Buy this book at Amazon.com The Python Tutorial — Python v3.0.1 documentation Python is an easy to learn, powerful programming language. It has efficient high-level data structures and a simple but effective approach to object-oriented programming. Python’s elegant syntax and dynamic typing, together with its interpreted nature, make it an ideal language for scripting and rapid application development in many areas on most platforms.

Good logging practice in Python In reality, logging is important. When you transfer money, there are transfer records. When an airplane is flying, black box (flight data recorder) is recording everything. Getting started with Python: Tips, Tools and Resources - Lesson in Programming 1. MIT 6.00x: Introduction to Computer Science and Programming 6.00x is an introduction to using computation to solve real problems. Second Try: Sentiment Analysis in Python : Andy Bromberg Introduction After my first experiments with using R for sentiment analysis, I started talking with a friend here at school about my work. Jackson and I decided that we’d like to give it a better shot and really try to get some meaningful results. After a lot of research, we decided to shift languages to Python (even though we both know R). We made this shift because Python has a number of very useful libraries for text processing and sentiment analysis, plus it’s easy to code in. We launched right into tutorials and coding, and this post will be about that process and our results.

Python Resources Skip to this view's content Please enter your e-mail address below, and we will e-mail instructions for setting a new password. Help Have general questions about edX? Machine Learning in Python Has Never Been Easier! « The Official Blog of BigML.com At BigML we believe that over the next few years automated, data-driven decisions and data-driven applications are going to change the world. In fact, we think it will be the biggest shift in business efficiency since the dawn of the office calculator, when individuals had “Computer” listed as the title on their business card. We want to help people rapidly and easily create predictive models using their datasets, no matter what size they are. Python Course: Introduction into NumPy Introduction NumPy is an acronym for "Numeric Python" or "Numerical Python". It is an open source extension module for Python, which provides fast precompiled functions for mathematical and numerical routines.