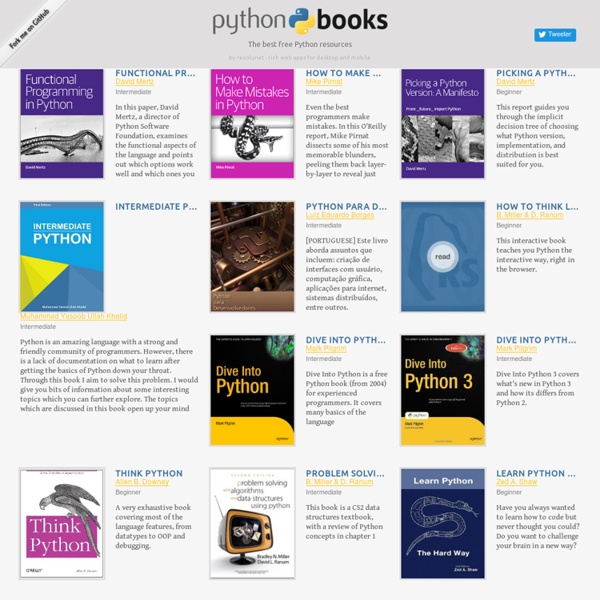 Text Processing in Python David Mertz Intermediate This is an example-driven, hands on tutorial that carefully teaches programmers how to accomplish numerous text processing tasks using Python. How to Tango with Django Leif Azzopardi

Non-Programmer's Tutorial for Python 3 Authors Contributors to this book Front matter Initial remarks Intro Python's IDLE editor: How to Use - by Dr A. Dawson Copyright Dr A Dawson 2005 - 2016 This file is: Python_Editor_IDLE.htm First created: Tuesday 8th March 2005, 7:28 PT, ADLast updated: Saturday 31st January 2015, 9:05 PT, AD This page explains how to run the IDLE integrated development environment (IDE) for editing and running Python 2.x or Python 3 programs. The IDLE GUI (graphical user interface) is automatically installed with the Python interpreter. Where The Rants Go By Zed A. Shaw I've had it. Dive Into Python is one of the worst books for learning Python and it must die.

Google's Python Class - Educational Materials Welcome to Google's Python Class -- this is a free class for people with a little bit of programming experience who want to learn Python. The class includes written materials, lecture videos, and lots of code exercises to practice Python coding. These materials are used within Google to introduce Python to people who have just a little programming experience. The first exercises work on basic Python concepts like strings and lists, building up to the later exercises which are full programs dealing with text files, processes, and http connections. The class is geared for people who have a little bit of programming experience in some language, enough to know what a "variable" or "if statement" is. Beyond that, you do not need to be an expert programmer to use this material.

Making Games with Python and Pygame Book Description This is a programming book that covers the Pygame game library for the Python programming language. Each chapter gives you the complete source code for a new game and teaches the programming concepts from these examples. The book is available under a Creative Commons license and can be downloaded in full for free from This book was written to be understandable by kids as young as 10 to 12 years old, although it is great for anyone of any age who has some familiarity with Python. About the Authors Albert Sweigart (but you can call him Al), is a software developer in San Francisco, California who enjoys bicycling, volunteering, haunting coffee shops, and making useful software. He is originally from Houston, Texas.

Python The Case for Test-Driven Development By Meghan Blanchette March 28, 2014 Harry Percival, author of Test-Driven Web Development with Python, discusses how he got into TDD, why you should too, and shares some tips. In the podcast above, listen to Harry talk candidly about the types of tests that make sense, … Interface Languages and Feature Discovery 10 interesting Python modules to learn in 2016 In this article I will give you an introduction into some Python modules I think of as useful. Naturally this can vary in your case but anyway it is a good idea to look at them, maybe you will use them in the future. I won't give a thorough introduction for each module because it would blow-up the boundaries of this article. However I will try to give you a fair summary on the module: what id does and how you can use it in the future if you are interested. For a detailed introduction you have to wait for either future articles which explain these libraries in more depth or you have to search the web to find resources. And there are plenty of good resources out there.