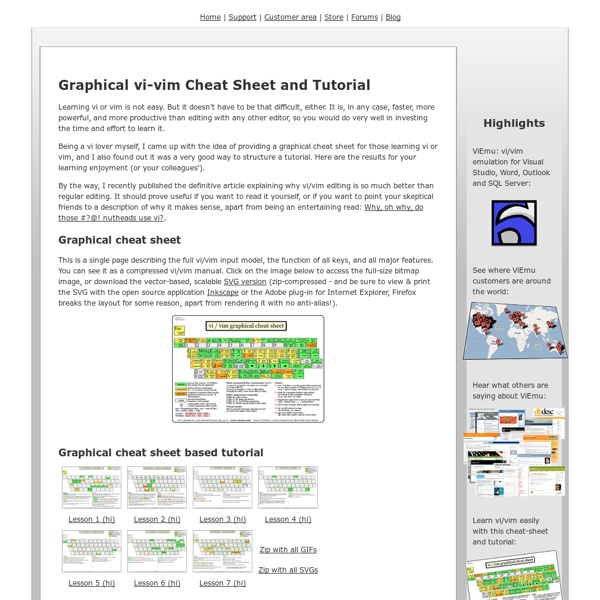 Learning vi or vim is not easy. But it doesn't have to be that difficult, either. It is, in any case, faster, more powerful, and more productive than editing with any other editor, so you would do very well in investing the time and effort to learn it. Being a vi lover myself, I came up with the idea of providing a graphical cheat sheet for those learning vi or vim, and I also found out it was a very good way to structure a tutorial. Here are the results for your learning enjoyment (or your colleagues'). By the way, I recently published the definitive article explaining why vi/vim editing is so much better than regular editing. Graphical cheat sheet This is a single page describing the full vi/vim input model, the function of all keys, and all major features. Graphical cheat sheet based tutorial The tutorial above is structured in 7 lessons that cover the major commands in vi/vim. Notes With the single exception of the external filter feature ("!") Relevant links Why, oh why, do those #?

Effective Rails Development with Vim If you are new to Vim, be sure to read my introduction as it will help prepare you for this article. Here, I am focusing on using Vim for effective Rails development. Rails Plugin Tim Pope wrote a very useful Vim plugin called [Rails.vim][1] that provides a lot of great functionality, including enhanced syntax highlighting, partial extraction, and easier navigation in a Rails project. Installation Using Vundle

Keep your vimrc file clean Many tips that you find on this site and others will tell you to add some code to your .vimrc file. (Or on Windows, your _vimrc file.) :help vimrc-intro Once you do this a few times, it can get pretty big and confusing, especially if the bits of configuration you are adding are each specific to a single language. Geany General Startup At startup, Geany loads all files from the last time Geany was launched. You can disable this feature in the preferences dialog (see General Startup preferences). You can start several instances of Geany, but only the first will load files from the last session. In the subsequent instances, you can find these files in the file menu under the "Recent files" item.

Vim: Seven habits of effective text editing Bram Moolenaar November 2000 If you spend a lot of time typing plain text, writing programs or HTML, you can save much of that time by using a good editor and using it effectively. This paper will present guidelines and hints for doing your work more quickly and with fewer mistakes. The open source text editor Vim (Vi IMproved) will be used here to present the ideas about effective editing, but they apply to other editors just as well. Tmux and Vim, get married. Vim and Tmux are an excellent choice for a modern develpment environment on Mountain Lion. I describe how to combine create such an environment using homebrew. Using a rad, aesthetically pleasing, and efficient development environment is so crucial to having a good day. I’m going to describe mine, and give you the set of links from which I’ve assembled this confection. We’ll be using: Vim & MacVim

Why, oh WHY, do those #?@! nutheads use vi? The VI Gang Sign by Jon Beltran de Heredia, May 16th, 2007 Yes, even if you can't believe it, there are a lot fans of the 30-years-old vi editor (or its more recent, just-15-years-old, best clone & great improvement, vim). The Linux Cookbook: Tips and Techniques for Everyday Use - Editing Images When you take an image file -- such as one containing a digitized photograph or a picture drawn with a graphics program -- and you make changes to it, you are editing an image. This chapter contains recipes for editing and modifying images, including how to convert between image file formats. It also gives an overview of other image applications you might find useful, including the featuresome GIMP image editor. Transforming Images: Transforming images from the command line. Converting Images: Converting image formats.

Git User’s Manual (for version 1.5.3 or newer) This chapter covers internal details of the git implementation which probably only git developers need to understand. It is not always easy for new developers to find their way through Git’s source code. This section gives you a little guidance to show where to start. A good place to start is with the contents of the initial commit, with: The initial revision lays the foundation for almost everything git has today, but is small enough to read in one sitting. Note that terminology has changed since that revision. Vim Text Objects: The Definitive Guide To edit efficiently in Vim, you have to edit beyond individual characters. Instead, edit by word, sentence, and paragraph. In Vim, these higher-level contexts are called text objects. The Differences Between Vi, Vim, and Emacs Few geek conflicts have the incandescence of the “best editor” debate. Say the words Vim or Emacs in a deeply crowd and you’ll likely hear the sound of Katana safety clasps. But what’s the debate at this point?

A First Vim Tutorial I've started using vim again. I thought I would post some of my vim notes. I generally use vim 50% in the terminal, and now 50% as Cream (UPDATE: After learning more Vim commands I switched from Cream to regular Gvim). Cream is a version of gvim that makes using vim really easy.