Vim Text Objects: The Definitive Guide. To edit efficiently in Vim, you have to edit beyond individual characters. 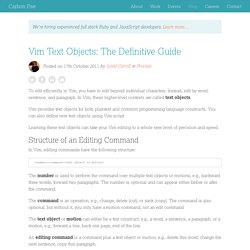 Instead, edit by word, sentence, and paragraph. Solarized: A Must Have Color Scheme For Gnome Terminal, Vim, Gedit And Lots More. WebUpd8 reader Lu Wang sent us an email about a beautiful (and very popular) color theme for various applications called "Solarized". 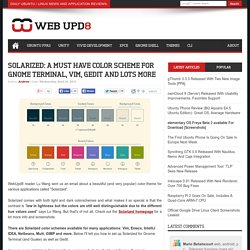 Solarized comes with both light and dark colorschemes and what makes it so special is that the contrast is "low in lightness but the colors are still well distinguishable due to the different hue values used" says Lu Wang. But that's of not all. Check out the Solarized homepage for a lot more info and screenshots. There are Solarized color schemes available for many applications: Vim, Emacs, IntelliJ IDEA, Netbeans, Mutt, GIMP and more. Below I'll tell you how to set up Solarized for Gnome Terminal (and Guake) as well as Gedit. Code folding in vim. Git - How can you automatically remove trailing whitespace in vim. Vim - How to jump back to NERDTree from file in tab? Vim - Switching between tabs in NERDTree. Vim clear last search highlighting.

Vi cheat sheet. How To Use Vundle to Manage Vim Plugins on a Linux VPS. Introduction The vim text editor is a versatile and extremely powerful tool for manipulating plain text, managing system configuration files, and creating code.

While the modal editing design focus and the elegant grammar of the editor itself is loved by its users, its interface and functionality sometimes lacks the niceties that some users would like. Luckily, vim also includes a plugin, or script, system which can be used to extend the editor in various ways. These are implemented as simple configuration files that are stored in subdirectories under the ~.vim directory according to their function. As you add more plugins, these can get quite messy and it can be difficult to keep these plugins separate and to manage them effectively.

For this reason, quite a few plugin managers have been made for vim to help make this task simpler. We will be exploring how to use vundle on an Ubuntu 12.04 VPS instance. Install the Utility Software. VI and VIM editor: Tutorial and advanced features. Vim Intro: This "vi" tutorial is intended for those who wish to master and advance their skills beyond the basic features of the basic editor. 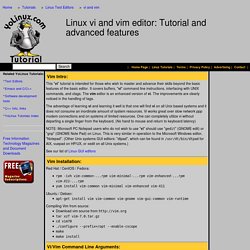 It covers buffers, "vi" command line instructions, interfacing with UNIX commands, and ctags. The vim editor is an enhanced version of vi. The improvements are clearly noticed in the handling of tags. The advantage of learning vi and learning it well is that one will find vi on all Unix based systems and it does not consume an inordinate amount of system resources. NOTE: Microsoft PC Notepad users who do not wish to use "vi" should use "gedit" (GNOME edit) or "gnp" (GNOME Note Pad) on Linux. See our list of Linux GUI editors. Tutorial. To be rewarded by the power of Vim, you will need to learn to properly drive it. 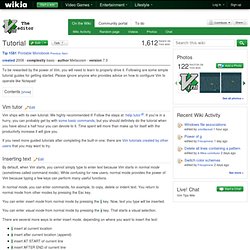 Following are some simple tutorial guides for getting started. Moving around. You can save a lot of time when navigating through text by using appropriate movement commands. 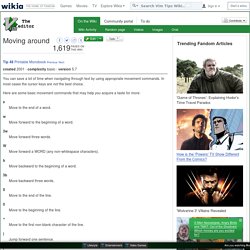 In most cases the cursor keys are not the best choice. Here are some basic movement commands that may help you acquire a taste for more: e Move to the end of a word. Copy, cut and paste. Here is how to cut-and-paste or copy-and-paste text using a visual selection in Vim. 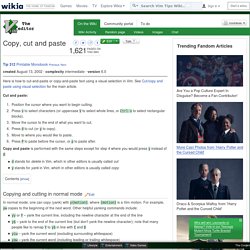 See Cut/copy and paste using visual selection for the main article. Cut and paste: Position the cursor where you want to begin cutting. Press v to select characters (or uppercase V to select whole lines, or Ctrl-v to select rectangular blocks). Move the cursor to the end of what you want to cut. Copy and paste is performed with the same steps except for step 4 where you would press y instead of d: d stands for delete in Vim, which in other editors is usually called cuty stands for yank in Vim, which in other editors is usually called copy Copying and cutting in normal mode Edit In normal mode, one can copy (yank) with y{motion}, where {motion} is a Vim motion.

Cutting can be done using d{motion}. Pasting in normal mode In normal mode, one can use p to paste after the cursor, or P to paste before the cursor. Why, oh WHY, do those #?@! nutheads use vi? The VI Gang Sign by Jon Beltran de Heredia, May 16th, 2007 Yes, even if you can't believe it, there are a lot fans of the 30-years-old vi editor (or its more recent, just-15-years-old, best clone & great improvement, vim). 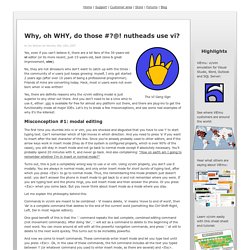 No, they are not dinosaurs who don't want to catch up with the times - the community of vi users just keeps growing: myself, I only got started 2 years ago (after over 10 years of being a professional programmer). Friends of mine are converting today. Heck, most vi users were not even born when vi was written! Yes, there are definite reasons why the vi/vim editing model is just superior to any other out there.