How I boosted my Vim » nvie.com. A few weeks ago, I felt inspired by articles from Jeff Kreeftmeijer and Armin Ronacher. 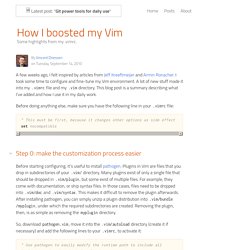 I took some time to configure and fine-tune my Vim environment. A lot of new stuff made it into my .vimrc file and my .vim directory. This blog post is a summary describing what I’ve added and how I use it in my daily work. Before doing anything else, make sure you have the following line in your .vimrc file: " This must be first, because it changes other options as side effectset nocompatible Step 0: make the customization process easier ¶ Before starting configuring, it’s useful to install pathogen.

So, download pathogen.vim, move it into the .vim/autoload directory (create it if necessary) and add the following lines to your .vimrc, to activate it: " Use pathogen to easily modify the runtime path to include all" plugins under the ~/.vim/bundle directorycall pathogen#helptags()call pathogen#runtime_append_all_bundles() " change the mapleader from \ to ,let mapleader="," VIM and Python - a match made in heaven. It has come to my attention that somebody ‘round these parts has been preaching the gospel of Sublime Text 3. Well, as the resident senior developer (err, old fogey), I feel it’s my duty to provide a counterexample by way of the only TRUE Python development environment you will ever need – and that environment is of course VIM.

Download the plugin: If you use Debian or a Debian based Linux distribution (Ubuntu or other), you may want to install the vim-r-plugin_1.1-1_all.deb package. After the installation, you can enable the plugin by doing the following commands: Szw/vim-ctrlspace · GitHub. Everything I Missed in "Vim After 11 Years" - Ian Langworth's Things of Variable Interest. Ap/vim-css-color. Switching to Vundle - Code7 Interactive.

I’ve been using Vim on and off for close to 10 years now and It became my primary editor when I switched from TextMate to MacVim a few years ago. 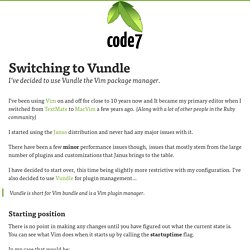 (Along with a lot of other people in the Ruby community) I started using the Janus distribution and never had any major issues with it. There have been a few minor performance issues though, issues that mostly stem from the large number of plugins and customizations that Janus brings to the table. I have decided to start over, this time being slightly more restrictive with my configuration. I’ve also decided to use Vundle for plugin management… Airblade/vim-gitgutter. Chrisbra/csv.vim · GitHub. Bling/vim-airline. Powerline/powerline · GitHub. Gmarik/Vundle.vim. O instalar Plugins no Vim » Pinceladas da Web - Aprenda HTML5, CSS3, Javascript e mais. 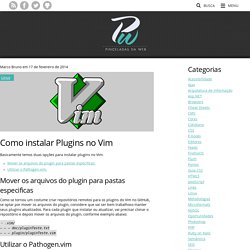 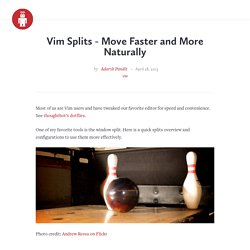 See thoughtbot’s dotfiles. One of my favorite tools is the window split. Here is a quick splits overview and configurations to use them more effectively. Photo credit: Andrew Ressa on Flickr The basics Create a vertical split using :vsp and horizontal with :sp. By default, they duplicate the current buffer. :vsp ~/.vimrc You can specify the new split height by prefixing with a number: 15 dicas para maior produtividade usando o GVim. Setting Up and Using Vim for Python / Django Development. There are a lot of text editors and IDEs for a popular language such as Python, and we’ve already featured Eclipse/PyDev before. 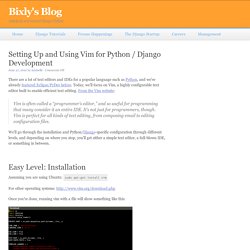 Today, we’ll focus on Vim, a highly configurable text editor built to enable efficient text editing. From the Vim website: Vim is often called a “programmer’s editor,” and so useful for programming that many consider it an entire IDE. It’s not just for programmers, though. Vim is perfect for all kinds of text editing, from composing email to editing configuration files. We’ll go through the installation and Python/Django-specific configuration through different levels, and depending on where you stop, you’ll get either a simple text editor, a full-blown IDE, or something in between. Seven reasons why you should switch to Vim.

By : Javed Khan So you want a better IDE for developing django, huh? 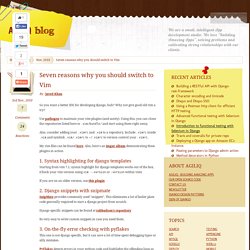 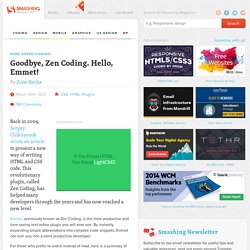 This revolutionary plugin, called Zen Coding, has helped many developers through the years and has now reached a new level. Emmet2, previously known as Zen Coding, is the most productive and time-saving text-editor plugin you will ever see. By instantly expanding simple abbreviations into complex code snippets, Emmet can turn you into a more productive developer. For those who prefer to watch instead of read, here is a summary of my favorite tricks. How Does It Work? Let’s face it: writing HTML code takes time, with all of those tags, attributes, quotes, braces, etc. HTML Abbreviations Initializers Getting started with a new HTML document takes less than a second now. Html:5 or ! Easily Add Classes, IDs, Text and Attributes Because Emmet’s syntax for describing elements is similar to CSS selectors, getting used to it is very easy. Also, you can combine classes and IDs. Nesting.