The Hack FAQ: Table of Contents 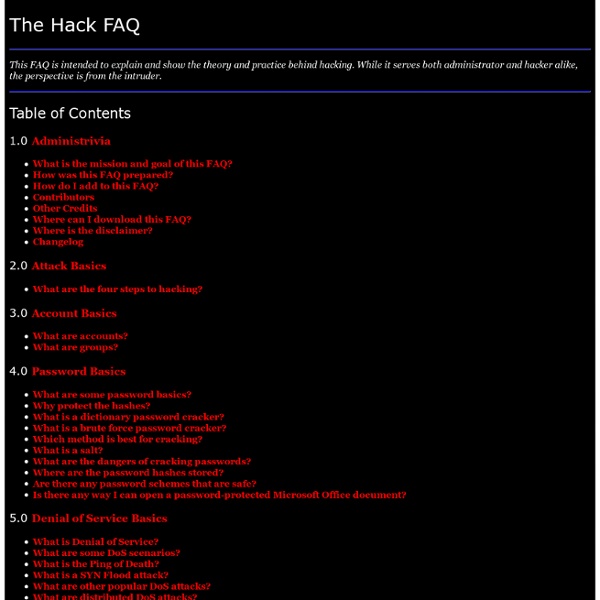 Nowhere to hide: Advertisers can now stalk you across multiple devices Advertisers want to compile as much information about you as possible. Tracking where you go, what you click, and how you search is literally their business. They use that data to target ads directly to you, and feed relevant data to their partners. With the increasing use of tablets and smartphones in daily life, advertisers have been frustrated by a limited ability to correlate traffic from multiple devices to a single person. Well, there is some good news for advertisers, but bad news for privacy advocates. The Drawbridge system allows the advertisers to target a single person with a specific advertising campaign, regardless of what device you happen to be using at the time. Drawbridge specifically says that it doesn’t use personally identifiable information, but it is matching first-party cookie data from all of your devices. How to prevent third parties from tracking you A large amount of tracking is done via JavaScript and cookies.

Free WiFi in Airports and Public Hotspots By Brian Wilson, CCNA, CCSE, CCAI, MCP, Network+, Security+, JNCIA Recently while traveling I noticed a hot spot and wanted to surf the internet. Once I connected to the AP I had seen that they wanted to charge me $8 per day to surf the internet. I thought that was just too much money for a quick internet connection, and my layover between flights was about 3 hours. Disclaimer: This paper and the topics covered in the paper are just for educational purposes and should not be tried on a network without the permission from the owner of the network you plan on testing. Well I got to their splash screen, and it would allow me to surf on that page and the local ISP's home page (the local ISP was their sponsor). Cain & Able Sniffers menu. SoftPerfect Network Scanner Once I received the results of the scanned subnet, I could see all of the other computers along side of me. EtherChange by www.NTSecurity.NU Category: Wilson

HackQuest :: Learn about Hacking, Cracking, JavaScript, PHP, Cryptology and Password security Hacker Test: A site to test and learn about web hacking AntiSec hackers leak 1,000,001 Apple device IDs allegedly obtained from FBI breach The AntiSec hacking group claims to have released a set of more than 1 million Apple Unique Device Identifiers (UDIDs) obtained from breaching the FBI. The group claims to have over 12 million IDs, as well as personal information such as user names, device names, notification tokens, cell phone numbers and addresses. (Updated with link below to check whether your device’s UDID was leaked) The hackers issued a statement with the following description on how the data was obtained: During the second week of March 2012, a Dell Vostro notebook, used by Supervisor Special Agent Christopher K. They published the UDID numbers to call attention to suspicions that the FBI used the information to track citizens. If AntiSec’s account of the breach is accurate, the NCFTA acronym in the filename would likely refer to the National Cyber-Forensics & Training Alliance, a non-profit corporation of experts from both the private and public sector that investigates cyber-crimes.

Nessus Vulnerability Scanner From the beginning, we've worked hand-in-hand with the security community. We continuously optimize Nessus based on community feedback to make it the most accurate and comprehensive vulnerability assessment solution in the market. 20 years later and we're still laser focused on community collaboration and product innovation to provide the most accurate and complete vulnerability data - so you don't miss critical issues which could put your organization at risk. Today, Nessus is trusted by more than 27,000 organizations worldwide as one of the most widely deployed security technologies on the planet - and the gold standard for vulnerability assessment. See for yourself - explore the product here. 1 in Accuracy Nessus has the industry's lowest false positive rate with six-sigma accuracy. 1 in Coverage Nessus has the deepest and broadest vulnerability coverage in the industry. 100+ new plugins released weekly 1 in Adoption 1 in Hearts and Minds Don't just take our word for it.

Challenges - ThisisLegal.com Access any album on any Facebook profile Hi everyone, I was creating a presentation last week covering the security risks and weaknesses of social networking websites and I found a few interesting things. The most interesting flaw I found was the poor control around access to users photo albums on Facebook, not the worlds biggest hack by a long way but still interesting. I contacted Facebook last Thursday and I never received a response so I felt it was time to post the full details on my blog. I’m going to explain below the theory behind the hack and some pictures showing it in action. aid= id= l= The aid= parameter is the album id, id= is the userid and the l= value is a random value which serves as a very poor security control. www.facebook.com/addfriend.php? The id= is the id we want, we can use this to begin building the URL to access that users album – remember we don’t need to to add them as a friend to do this. The full URL which gives us access to the album can be seen below: Dave