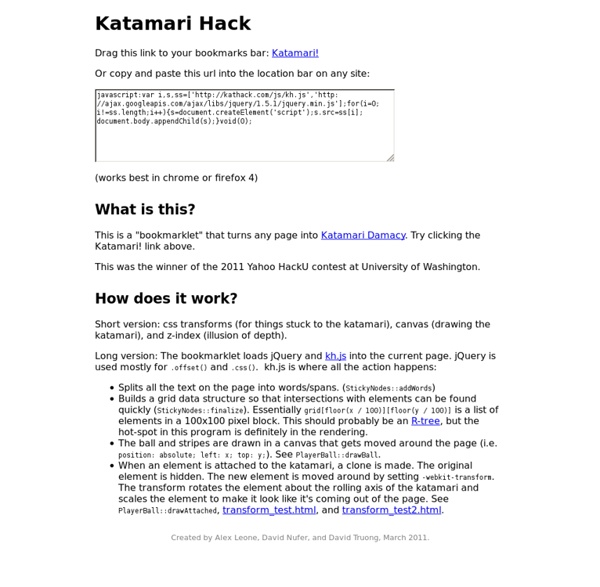 Or copy and paste this url into the location bar on any site: javascript:var i,s,ss=['http://kathack.com/js/kh.js','http://ajax.googleapis.com/ajax/libs/jquery/1.5.1/jquery.min.js'];for(i=0;i!=ss.length;i++){s=document.createElement('script');s.src=ss[i];document.body.appendChild(s);}void(0); (works best in chrome or firefox 4) What is this? This is a "bookmarklet" that turns any page into Katamari Damacy.

Top 10 Games You Never Played I have a confession to make: I haven't played every game ever made. I also seriously doubt I shall ever accomplish such a task, but I can safely say that my tastes generally skew a little from the norm. As such, the following is a list of my ten favorite games that I seriously feel too few people have played. Without further ado, the Top Ten Games You Never Played. SpaceChem The creator of The Codex of Alchemical Engineering and Bureau of Steam Engineering (not to mention the grandaddy of Minecraft, Infiniminer) is back with a full-fledged indie game ready to provide a serious logic puzzle challenge. SpaceChem is anything but simple, anything but easy, and one of the most satisfying puzzle games released. If you can solve its challenges, that is. SpaceChem is a game you'll spend a few minutes learning but weeks trying to master, and its 50+ levels are more than enough to strain your poor brain matter more than it's been strained in quite some time. If you've ever played a game from Zachtronics Industries, you know it isn't really possible to read a paragraph introduction and learn everything about the game.

Warnings from Former Presidents About Who Really Runs the Show digg Verified Warnings From Former U.S. Presidents About the “Invisible Government” Running the U.S. Honda CL 360 - 'Willow' - Pipeburn - Purveyors of Classic Motorcycles, Cafe Racers & Custom motorbikes “So why did you name the bike Willow?” This is the first question we asked Troy Helmick, the builder of this amazing bike. “Willow trees are strong but fluid” he replied. Very zen, sensei Helmick. Troy is a retired photographer who now runs an Alpaca farm in West Virginia. “It is my attempt to evoke a picture in a person’s head when they hear a name and then couple that name with the image they see before them in my machine” he explains.

Braid We've just finished a complete walkthrough (with images) for Braid!! Be warned: contains major spoilers, so proceed only as a last resort. World 2 Three easy pieces This level is very simple. The first puzzle piece is under the bridge you walk over, you can't miss it. The next piece you will need to jump on the goomba to get to it. 50 Animated Gifs for Every Situation Ever If a picture is worth a thousand words, then an animated gif must be worth some kind of number I can’t even begin to comprehend. If you’ve ever found yourself browsing the Internet and felt compelled to respond with a witty reply, only to come up: wow, mind. blown., golf clap, etc. Then these animated gifs are for you! With the simple copy and paste of one of the images below you can make your feelings resonate while bathing in the adulation of Internet pundits the world over.

‘It’s Great to Be Alive!’ Vintage Safety Manual Favourited 1383 times My husband has one or two of these manual. They weren’t instructive but sure scared the bejesus out of you! Reply @Jennifer–you and me both! Why the mantis shrimp is awesome. They all look the same to me SCORE 109 That escalated quickly SCORE 111 Weird Al Magic Trick SCORE 116 Mexican proverb SCORE 110 Completely unnecessary SCORE 123 Universal Animal Truth SCORE 108 Something fishy: Stunning photos show the in's and out's of cold-blooded creatures (and even the dinner they ate) By Daily Mail Reporter Published: 01:23 GMT, 14 April 2012 | Updated: 02:20 GMT, 14 April 2012 It’s a whole new way to look at fish. In a stunning collection by the Smithsonian, cold-blooded creatures are photographed from the inside out, showing every bone, rib, and feature to them. The collection represents more than 70 per cent of the world’s fish, including well-recognized species like swordfish, flounder, and seahorses.