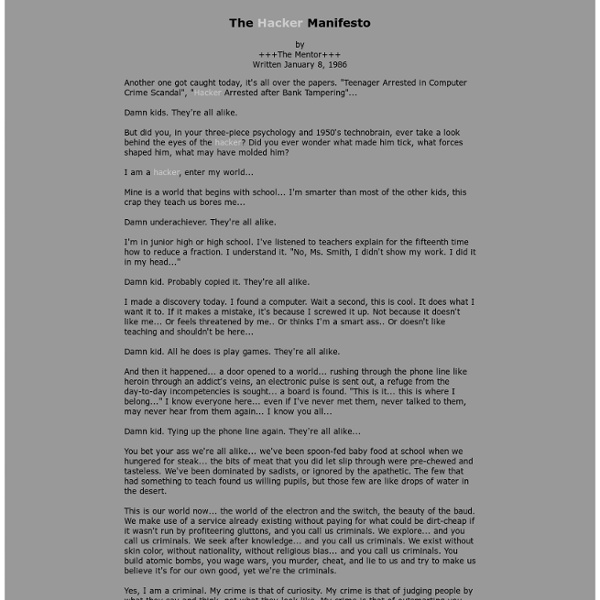 by +++The Mentor+++ Written January 8, 1986 Another one got caught today, it's all over the papers. "Teenager Arrested in Computer Crime Scandal", "Hacker Arrested after Bank Tampering"... Damn kids. They're all alike. But did you, in your three-piece psychology and 1950's technobrain, ever take a look behind the eyes of the hacker? I am a hacker, enter my world... Mine is a world that begins with school... Damn underachiever. I'm in junior high or high school. Damn kid. I made a discovery today. Damn kid. And then it happened... a door opened to a world... rushing through the phone line like heroin through an addict's veins, an electronic pulse is sent out, a refuge from the day-to-day incompetencies is sought... a board is found. Damn kid. You bet your ass we're all alike... we've been spoon-fed baby food at school when we hungered for steak... the bits of meat that you did let slip through were pre-chewed and tasteless. Yes, I am a criminal. I am a hacker, and this is my manifesto.

The OpNewblood Super Secret Security Handbook « welcome to serpent's embrace The #OpNewblood Super Secret Security Handbook If you have not gone through the IRC chat client setup for your operating system, we recommend you go back and get started there. Master Table of Contents 1) Preface 2) Setting up Tor 3) Firefox Recommended Add-Ons 4) Setting up i2p 4.1) Installation 4.2) Firefox Configuration 4.3) IRC Client Configuration 4.4) I2p IRC on Android via irssi connectbot 5) Advanced IRC 5.1) Commands 5.2) Browsing 6) Advanced Defense Techniques 7) Portable Solutions 8 ) ADVANCED GUIDE TO HACKING AND SECURITY VULNERABILITY Section 1: Preface NOTE: If at any time you need help with any topic found in this guide, feel free to join us at and you’ll be able to find someone to help you figure it out.

40 Belief-Shaking Remarks From a Ruthless Nonconformist If there’s one thing Friedrich Nietzsche did well, it’s obliterate feel-good beliefs people have about themselves. He has been criticized for being a misanthrope, a subvert, a cynic and a pessimist, but I think these assessments are off the mark. I believe he only wanted human beings to be more honest with themselves. He did have a remarkable gift for aphorism — he once declared, “It is my ambition to say in ten sentences what others say in a whole book.” The Tao Of Programming Translated by Geoffrey James Transcribed by Duke Hillard Transmitted by Anupam Trivedi, Sajitha Tampi, and Meghshyam Jagannath Re-html-ized and edited by Kragen Sittler Last modified 1996-04-10 or earlier Anonymous: From the Lulz to Collective Action Taken as a whole, Anonymous resists straightforward definition as it is a name currently called into being to coordinate a range of disconnected actions, from trolling to political protests. Originally a name used to coordinate Internet pranks, in the winter of 2008 some wings of Anonymous also became political, focusing on protesting the abuses of the Church of Scientology. By September 2010 another distinct political arm emerged as Operation Payback and did so to protest the Motion Picture Association of America (MPAA), and a few months later this arm shifted its energies to Wikileaks, as did much of the world's attention. It was this manifestation of Anonymous that garnered substantial media coverage due the spectacular waves of distributed denial of service (DDoS) attacks they launched (against PayPal and Mastercard in support of Wikileaks).

Chapter 1. Hacker Slang and Hacker Culture This document is a collection of slang terms used by various subcultures of computer hackers. Though some technical material is included for background and flavor, it is not a technical dictionary; what we describe here is the language hackers use among themselves for fun, social communication, and technical debate. The ‘hacker culture’ is actually a loosely networked collection of subcultures that is nevertheless conscious of some important shared experiences, shared roots, and shared values. It has its own myths, heroes, villains, folk epics, in-jokes, taboos, and dreams.

Raspberry Pi Founder Eben Upton Walks You Through the Launch of the $35 Computer In just a few weeks UK’s Raspberry Pi Foundation will be ready to launch one of the most anticipated products of 2012 – a $35 computer. The Raspberry Pi Model B is a bare-bones circuit board that packs a surprising punch – 700 MHz ARM processor, 256 MB of memory, and HDMI output. Designed as a low cost, easy to explore learning platform to attract a new generation of students to coding, the Linux Box computer is a marvel of efficiency. The first 10,000 Model Bs will be shipping into (and then out of) the UK very soon, so it only makes sense that Raspberry Pi founder Eben Upton would take the time to prepare everyone for what to expect. He gives a detailed report on the exciting new device in the video from Slashdot below.