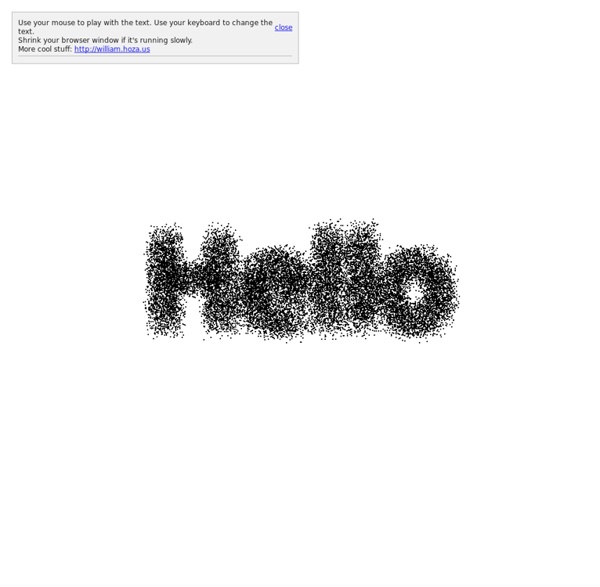 // Animated Gifs 01 - Matthew DiVito // MOTION // GRAPHIC // DESIGN // Animated Gifs 01 What started as a little experiment has grown into something more. Selections from my blog mrdiv.tumblr.com retro_break january 22, 2012 The Dalai Lama's 18 Rules For Living - StumbleUpon May 6, 2011 | 42 Comments » | Topics: Life, List At the start of the new millennium the Dalai Lama apparently issued eighteen rules for living. Since word travels slowly in the digital age these have only just reached me. Here they are. Take into account that great love and great achievements involve great risk. When you lose, don’t lose the lesson.

Alex K. - 45 Life Lessons, written by a 90 year old 1. Life isn’t fair, but it’s still good. 2. When in doubt, just take the next small step. Nudge Select 1 of 8 different Sound Patterns from the small Matrixes icons on the right. Use your mouse to draw notes on each 16 Step Matrix. Adjust the volume of the iNudge. Click MORE for advanced adjustment abilities. Best 101 Entrepreneurship Quotes Ever · 14 Clicks I’m a big fan of quotes. I could read them all day long. Some quotes can shift your entire mindset on something while others are just nice to bring up in conversations. I’ve spent the last two years (off and on) compiling 101 of my favorite entrepreneurship quotes around success, failure, leadership, wisdom, humor, money, practicality, motivation, and a smattering of entrepreneurial proverbs. Success Quotes Failure Quotes

(Images) 56 Inspirational Picture Quotes That Will Motivate Your Mind Home > Quotes > (Images) 56 Inspirational Picture Quotes That Will Motivate Your Mind, Body & Soul By Joel Brown on August 24, 2011 Now and then when we need a little Inspiration we often reach for a daily quote or motivational video. Unusual Long Exposure Firework Photographs by David Johnson While attending the International Fireworks Show in Ottawa, Canada earlier this month photographer David Johnson had his camera in hand to document the night. When Spain’s entry into the competition begin he decided to try something a little different resulting in the photos you see here which are unlike any long exposure firework shots I’ve ever seen. Via email David tells me how he accomplished the effect: The technique I used was a simple refocus during the long exposure.

Drive: The Surprising Truth About What Motivates Us July 22, 2011 by Akira Hirai Daniel Pink’s book, Drive, explores some misconceptions about what drives human behaviors. For example, one commonly held belief is that if you provide larger monetary incentives, people will perform better. This turns out to be true for simple, mechanical tasks, but false when applied to complex tasks that require conceptual reasoning. For the latter, better outcomes are achieved by providing autonomy, providing people with the opportunity to master the subject matter, and creating a sense of purpose.