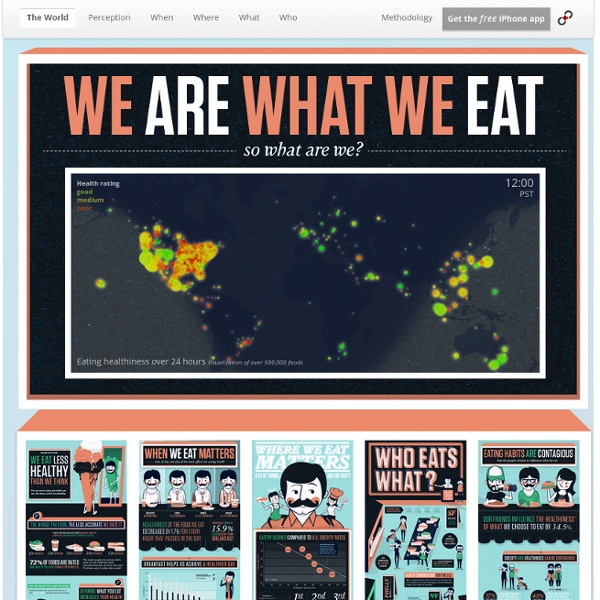 Behind a better life: interactive guide to the data Turn autoplay off Edition: <span><a href=" Sign in Beta About us The Best Infographics Of 2012 — So Far I usually just do a year-end list of The Best Infographics and many other topics, but it gets a little crazy having to review all of my zillion posts at once. So, to make it easier for me — and perhaps, to make it a little more useful to readers — I’m going to start publishing mid-year lists, too. These won’t be ranked, unlike my year-end “The Best…” lists, and just because a site appears on a mid-year list doesn’t guarantee it will be included in an end-of-the-year one.

Climb every mountain: visualising the world's 50 most prominent peaks Data scientist Robert Mundigi has created a multi-faceted visualisation of the world's 50 most prominent peaks. The interactive graphic, made using Tableau Public, features a clickable map of the summits, satellite images of each peak and figures for each mountain's prominence and overall elevation. In mountaineering terms, prominence is the vertical distance between a summit and the lowest contour line encircling it and no higher peak. 15 Stunning Examples of Data Visualization Data Visualization is a method of presenting information in a graphical form. Good data visualization should appear as if it is a work of art. This intrigues the viewer and draws them in so that they can further investigate the data and info that the graphic represents. In this post there are 15 stunning examples of Data Visualization that are true works of art. Click on the title or image for a larger view of each visualization. The Strengths of Nations

Thanks for choosing Tableau Public Your download should begin automatically, but if it doesn’t, click here. Need the 64-bit version? Click here. Just follow these easy steps to install your software: Click the “Run” button to start the process. Depending on your browser, you might not get the security warning screen.Go to step 2. Ingienous Designs One obvious strategy to reducing our consumption is by saving energy and natural resources. Just how much do we waste? The figures are truly astounding.

Dance, Factors, Dance – A Variation On Yorgey's Factorization Diagrams Upon first sight of Brent Yorgey’s brilliant Factorization Diagrams, I knew that I should take his lovely little dots and make them dance. Our first tango would be inspired by the digital clock, with a separate diagram for each of the hours, minutes, and seconds. For example, we’d portray 4:34:27 am like so: Victorian Infographics A time table indicating the difference in time between the principal cities of the World and also showing their air-line distance from Washington. IN: 'Mitchell's New General Atlas, Containing Maps Of The Various Countries Of The World, Plans Of Cities, Etc., Embraced In Ninety-Three Quarto Maps, Forming A Series Of One Hundred and Forty-seven Maps and Plans, Together With Valuable Statistical Tables..' by Samuel Augustus Mitchell Jr, 1883; published in Philadelphia by WM Bradley. Tableau d'Astronomie et de Sphère

Edlib: qrcodes The use of QR codes (Quick response codes) are really taking off across all aspects of our lives. There are great opportunities to use them in learning and many educational bodies and libraries are taking on the challenge.(Picture at right from the Daring Librarian - Hot QR codes in the classroom and library) Following is some great resources to get you started using QR codes in learning.