The Triple Waterfall Of Baatara Gorge 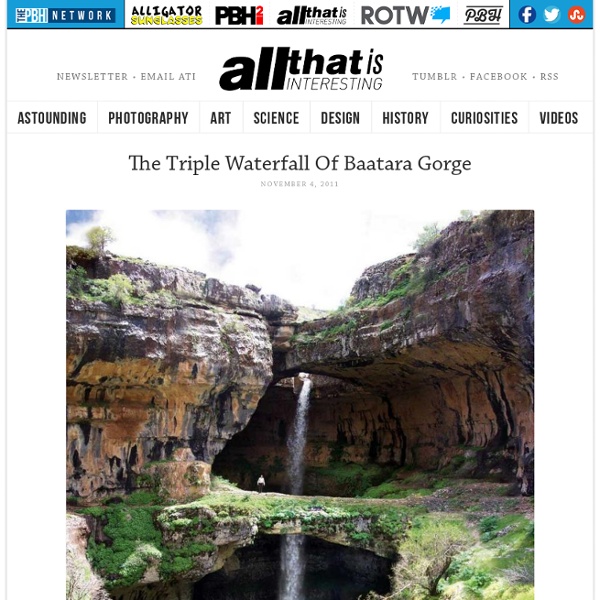 Seven Of The World’s Most Treacherous Climbs Asteroid Impact Craters on Earth as Seen From Space | Wired Science Asteroid impact craters are among the most interesting geological structures on any planet. Many other planets and moons in our solar system, including our own moon, are pock-marked with loads of craters. But because Earth has a protective atmosphere and is geologically active — with plate tectonics and volcanic eruptions, mostly relatively young oceanic crust, and harsh weathering from wind and water — impact structures don’t last long and can be tough to come by. But on a few old pieces of continent, especially in arid deserts, the marks of asteroids have been preserved. Aorounga crater, pictured above and below, is one of the best preserved impact craters on Earth, thanks in part to its location in the Sahara Desert in Chad. Images: NASA Pages: 1 2345678910View All

Five More Of History's Most Iconic Photographs Iconic Photographs: Tiananmen Square ‘Tank Man’, 1989 Despite being an event that China would like the world to forget, this image of the anonymous ‘Tank Man’ who stood in front of advancing tanks the day after the Tiananmen Square Massacre spoke volumes around the world about the struggle for democracy in China. Though the ‘Tank Man’ was eventually dragged away, the photograph became synonymous with political activism and resistance in the modern world. History’s Most Iconic Photographs: Man Walks on the Moon, Neil Armstrong, 1969 Taken by Neil Armstrong, this iconic photograph captures Buzz Aldrin as he walks along the moons surface in 1969 Battle Iwo Jima Flag Raising, Joe Rosenthal, 1945 The flag raising at Iwo Jima was the defining image of the Pacific theater of World War 2 and one of history’s most iconic photographs.

Six Amazing Oceanic Creatures The depths of the ocean are jam-packed with weird and wonderful creatures — great, small, hairy, ugly, colorful and alike. We were hard-pressed to pick just six, but here are some of lesser known and most amazing oceanic creatures of the seas: Amazing Oceanic Creatures: Axolotl The Axolotl is a species of salamander that fails to undergo full metamorphosis, retaining qualities from the larvae stage into their adult phase. The species is generally found in Mexico,and is named after an Aztec term that means ‘water doll’. Axolotl’s are characterized by five colors (mottled black/green, white, gold, black, albino), long tails, a fin from the back of the head to the tail, four lizard-like legs, feathery gills and the ability to regenerate limbs. Amazing Oceanic Creatures: Yeti Lobster The Kiwa Hirsuta, more commonly known as Yeti Lobster, was discovered in March 2005 in the South Pacific Ocean.

The Six Most Remote Places In Human Civilization Most Remote Places In Human Civilization: Alert, Canada The small village of Alert lies on the tip of the Nunavut territory in Canada a mere five hundred miles below the North Pole. With a year-round population of five people, Alert is one of the most treacherous and remote places in the world. Surrounded by the Arctic Ocean, the temperatures in the region can reach as low as 40 degrees below zero. The Most Remote Places: Tristan da Cunha Located in the southern Atlantic Ocean, Tristan de Cunha is an archipelago of small islands considered the most remote place in the world. A total of 271 people are scattered across the islands’ working as farmers and craft makers, though they do have television stations and Internet access via satellite.

Amazing Scanning Electron Microscope Photos Amazing Scanning Electron Microscope Photos All these pictures are from the book 'Microcosmos,' created by Brandon Brill from London. This book includes many scanning electron microscope (SEM) images of insects, humanbody parts and household items. These are the most amazing images of what is too small tosee with the naked eye. 2-2-11 An ant, Formica fusca, holding a microchip Surface of an Erasable Programmable Read-Only Memory silicon microchip Eyelash hairs growing from the surface of human skin The surface of a strawberry Bacteria on the surface of a human tongue Human sperm (spermatozoa) Nylon hooks and loops of Velcro Household dust: includes long hairs of cat fur, twisted synthetic and woolen fibers, serrated insect scales, a pollen grain, and plant and insect remains The weave of nylon stocking fibers The head of a mosquito Head louse clinging to a human hair Eight eyes (two groups of four) on the head of a tarantula Cut human hairs and shaving foam between two razor blades Mushrooms spores

Namibia's Coastal Parks - Behind the Lens: Photograph or Painting? While on assignment in Namibia for National Geographic magazine, Frans Lanting captured this surreal landscape image in a location called Dead Vlei. Due to the nature of the lighting in the frame, the photograph appears almost like a painting. We asked Lanting to take a few moments away from his current assignment in Africa to answer readers' questions about the photograph. Due to limited internet connectivity in the field, he was only able to provide brief responses to questions, so we asked Elizabeth Krist—Lanting's photo editor for this story—to offer additional detail where appropriate.(If you are interested in acquiring this image as a fine art print, please e-mail gallery@lanting.com.) From Shay Mordo: Absolutely amazing composition! Lanting: Here's a short summary about the making of the photo. Photograph by Frans Lanting From Ana Paula: What is it that appears white in the orange background? Lanting: The sand dune is dotted with white grasses.

Extreme Life on Earth: 8 Bizarre Creatures | Yellowstone Microbes, Hydrothermal Vents | Radiation-Proof Microbes Could Survive on Mars Credit: David M. Ward From bacteria that can survive inside rocks to microbes that can withstand tremendous heat, cold and radiation, life can take some extreme forms. These enterprising creatures reveal not just the resilience of life on Earth, but the possibilities for life elsewhere in the universe. Here are some especially amazing examples of so-called extremophiles. Author Bio Clara Moskowitz Clara has a bachelor's degree in astronomy and physics from Wesleyan University, and a graduate certificate in science writing from the University of California, Santa Cruz. Clara Moskowitz on

Seven Bizarre and Beautiful Natural Phenomena Man-made miracles, move over! These beautiful natural phenomena prove that Mother Nature is the ultimate creator: Beautiful Natural Phenomena: Fire Rainbows The Fire Rainbow is the colloquial term for the atmospheric phenomenon, circumhorizontal arc. When the sun’s light enters the cloud vertically, the light leaves the ice crystal from the bottom, and the crystal bends the light to form the rainbow arc. Beautiful Natural Phenomena: Black Sun The Black Sun is the phenomenon in Denmark, which occurs just before sunset in spring and autumn. Aurora extravaganza glows in space NASA videos show January's northern lights from high above. NBC's Brian Williams reports. By Alan Boyle, Science Editor, NBC News Colorful videos prove that the astronauts on the International Space Station had the best seats in the house during last month's flare-up of auroral activity. NASA's Gateway to Astronaut Photography of Earth is offering a whole new batch of time-lapse videos from the Jan. 25-30 period, when an active region on the sun was blasting out a healthy dose of electrically charged particles and lighting up Earth's upper atmosphere. Time-lapse video from the International Space Station on Jan. 29. These latest videos are notable because they're assembled from still pictures that were taken at a rate of one frame per second, rather than the usual frame every three seconds. The video above documents a minute of flight heading east from the Pacific over the Canadian West Coast, heading toward southern Alberta near Calgary. Chad Blakley / Lights Over Lapland AuroraMAX / CSA