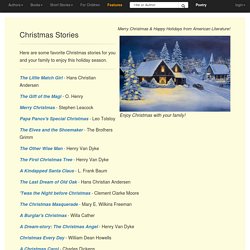 Enjoy Christmas with your family! Here are some favorite Christmas stories for you and your family to enjoy this holiday season. The Little Match Girl - Hans Christian Andersen The Gift of the Magi - O. Henry Merry Christmas - Stephen Leacock Papa Panov's Special Christmas - Leo Tolstoy. How to Piss Off A Swede. I lived in Sweden for a year while studying abroad and it is one of my favorite places in the world. 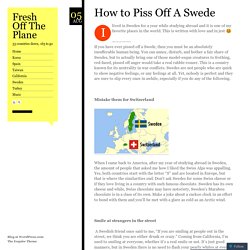 This is written with love and in jest :) —————- If you have ever pissed off a Swede, then you must be an absolutely insufferable human being. You can annoy, disturb, and bother a fair share of Swedes, but to actually bring one of those model-esque creatures to frothing, red-faced, pissed off anger would take a real rabble-rouser. This is a country known for its neutrality in war conflicts. Swedes are not people who are quick to show negative feelings, or any feelings at all. Mistake them for Switzerland When I came back to America, after my year of studying abroad in Sweden, the amount of people that asked me how I liked the Swiss Alps was appalling.

Smile at strangers in the street A Swedish friend once said to me, “If you are smiling at people out in the street, we think you are either drunk or crazy.” Don’t know how to dress for winter Det finns inget dåligt väder, bara dåliga kläder. Where Children Sleep photographs from around the world. Photographer James Mollison travelled around the world to capture children's bedrooms The project, Where Children Sleep is set to highlight children's rights across the globeChildren, and their bedrooms, come from all over the world, from China to the U.S. to Brazil By Sara Malm Published: 10:30 GMT, 3 April 2014 | Updated: 14:43 GMT, 3 April 2014 The difference between east and west, rich and poor becomes stark when looking at how our children sleep at night. 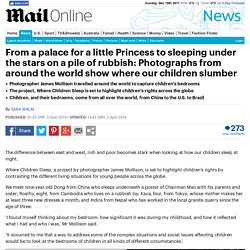 Where Children Sleep, a project by photographer James Mollison, is set to highlight children’s rights by contrasting the different living situations for young people across the globe. We meet nine-year-old Dong from China who sleeps underneath a poster of Chairman Mao with his parents and sister; Roathy, eight, from Cambodia who lives on a rubbish tip; Kaya, four, from Tokyo, whose mother makes her at least three new dresses a month; and Indira from Nepal who has worked in the local granite quarry since the age of three. Learn to Fika. If you learn only one Swedish word, make it fika (fee-ka). 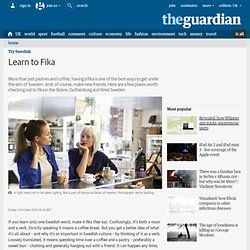 Confusingly, it’s both a noun and a verb. Strictly speaking it means a coffee break. But you get a better idea of what it’s all about - and why it’s so important in Swedish culture - by thinking of it as a verb. Loosely translated, it means spending time over a coffee and a pastry - preferably a sweet bun - chatting and generally hanging out with a friend. 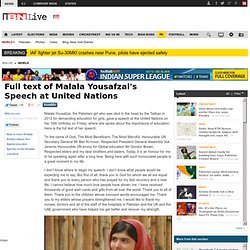 Here is the full text of her speech: "In the name of God, The Most Beneficent, The Most Merciful. Honourable UN Secretary General Mr Ban Ki-moon, Respected President General Assembly Vuk Jeremic Honourable UN envoy for Global education Mr Gordon Brown, Respected elders and my dear brothers and sisters; Today, it is an honour for me to be speaking again after a long time. Being here with such honourable people is a great moment in my life. I don't know where to begin my speech. Pakistani girl Malala Yousafzai was shot in the head by the Taliban in 2012 for demanding education for girls. 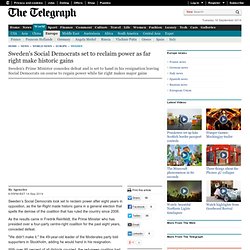 However the anti-immigration Sweden Democrats, with 48 seats, have become the third largest party in the Swedish parliament, reflecting the growing frustration among the 10 million strong population at liberal asylum rules that have resulted in a growing influx of refugees. Jimmie Aakesson, leader of the Democrats hailed the result.

"We are the absolute kingmaker now," he told supporters in Stockholm. Stefan Löfven, the former welder who leads the Social Democrats, looks set to become the next prime minister, although he has ruled out co-operating with the far right. He said Sweden was facing major challenges after 8 years of centre-right rule with high unemployment and declining school results. "We are in serious situation. "There is something that is breaking. “We ran a tremendous campaign, I would say.