Oliver's London. Oliver Twist and the workhouse. The hardships of the Victorian workhouse led Oliver Twist utter the famous phrase ‘Please Sir, I want some more’. Here Ruth Richardson explores Dickens’s own experiences of poverty and the social and political context in which he was writing. Most people nowadays know about the Poor Law and its workhouses from Oliver Twist - whether from the book, film or the musical. Oliver Twist Summary - Schoolbytes. Ok, first things first. 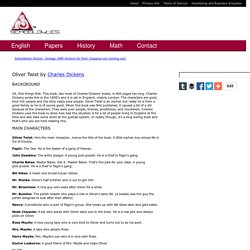 This book, like most of Charles Dickens' books, is 400 pages too long. Charles Dickens wrote this in the 1800's and it is set in England…mainly London. The characters are good, kind rich people and the dirty nasty poor people. Oliver Twist is an orphan but really he is from a good family so he is of course good. Oliver Twist and the workhouse. Oliver Twist. (BBC)US DVD: 24 Feb 2009UK DVD: 18 Dec 2007 Though some details of Charles Dickens’ novel are conflated in this new adaptation of the classic tale, overall this is an admirable re-telling. 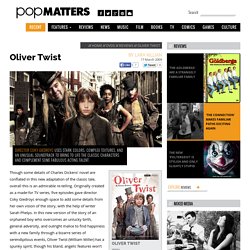 Originally created as a made-for TV series, five episodes gave director Coky Giedroyc enough space to add some details from her own vision of the story, with the help of writer Sarah Phelps. In this new version of the story of an orphaned boy who overcomes an unlucky birth, general adversity, and outright malice to find happiness with a new family through a bizarre series of serendipitous events, Oliver Twist (William Miller) has a spunky spirit, though his bland, angelic features won’t give it away. Each episode starts with a slightly off-key circus theme, showcasing the maudlin cast of characters one by one in their dingy urban glory.

Oliver Twist BBC 2007. Legal Child Abuse: Newsroom: The Independent Institute. History frowns upon the belief that government protects children’s rights, and yet that is precisely the claim that undergirds child labor laws, now enforced in most parts of the world. 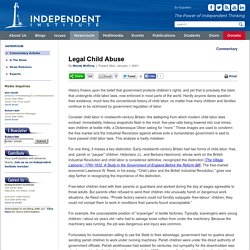 Hardly anyone dares question their existence, much less the conventional history of child labor, no matter how many children and families continue to be victimized by government regulation of labor. Consider child labor in nineteenth-century Britain--the wellspring from which modern child labor laws evolved. Immediately, hideous snapshots flash in the mind: five-year-olds being lowered into coal mines, wan children at textile mills, a Dickenesque Oliver asking for “more.”

These images are used to condemn the free market and the Industrial Revolution against whose evils a humanitarian government is said to have passed child labor laws. This analysis is badly mistaken. The union workhouse, a history & resource. These pages were started in October 1998 when there was no general information on workhouses on the Information Super-highway, as we used to call the Internet. 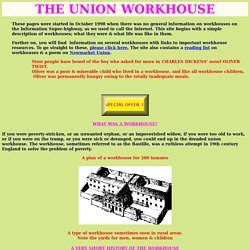 This site begins with a simple description of workhouses; what they were & what life was like in them. Further on, you will find information on several workhouses with links to important workhouse resources. The Poor Laws. From its beginnings in the fourteenth century, up to the inauguration of the National Health Service in 1948, the evolution of England's poor laws is the story of one of the most significant and far-reaching strands of the nation's social policy and administration. 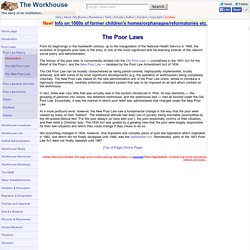 The history of the poor laws is conveniently divided into the Old Poor Law — crystallised in the 1601 Act for the Relief of the Poor<, and the New Poor Law — heralded by the Poor Law Amendment Act of 1834. The Old Poor Law can be broadly characterised as being parish-centred, haphazardly implemented, locally enforced, and with some of its most significant developments (e.g. the operation of workhouses) being completely voluntary. The New Poor Law, based on the new administrative unit of the Poor Law Union, aimed to introduce a rigorously implemented, centrally enforced, standard system that was to be imposed on all and which centred on the workhouse. 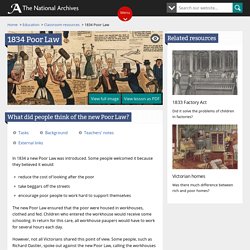 Some people welcomed it because they believed it would: reduce the cost of looking after the poortake beggars off the streetsencourage poor people to work hard to support themselves The new Poor Law ensured that the poor were housed in workhouses, clothed and fed. The history of the workhouse by Peter Higginbotham. GCSE Bitesize: The Poor Law. “Please sir! I want some more!”: The Horror of Victorian-era Workhouses. 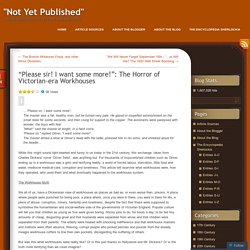 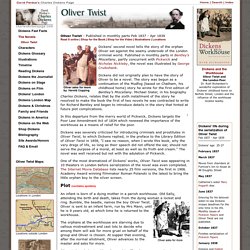 Dickens expressed surprise when the Jewish community complained about the stereotypical depiction of Fagin. Later, when Dickens sold his London residence, Tavistock House, to a Jewish couple, whom he befriended, he was compelled to make restitution. In his novel, Our Mutual Friend, Dickens created Riah, a positive Jewish character. Dickens & the Victorian City. Inner city Victorian poverty in Gustave Doré’s Wentworth Street. 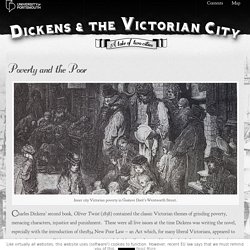 Charles Dickens’ second book, Oliver Twist (1838) contained the classic Victorian themes of grinding poverty, menacing characters, injustice and punishment. These were all live issues at the time Dickens was writing the novel, especially with the introduction of the1834 New Poor Law – an Act which, for many liberal Victorians, appeared to criminalise the poor.

Dickens was a vigorous critic of the New Poor Law and he relentlessly lampooned the harsh utilitarian ethics behind it – the belief that the workhouse would act as a deterrent so fewer people would claim poor relief and thereby the poor rate would reach its ‘correct’ level. Unit 5: Facilitating Critical Thinking through Literature. One way to develop higher-order thinking skills is to have students evaluate a text. 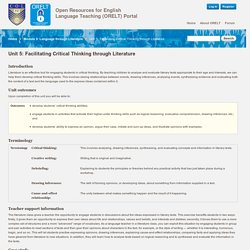 This involves judging the merit of a text; that is, saying whether one liked/disliked the storyline and why, or what, in the reader’s opinion, are the special merits/demerits of the text. This activity benefits students in many ways: they learn to be self-confident and value their own opinions, they are forced to think and present their views in a more logical and creative manner, and they become motivated to read more. This activity is divided into three stages; the students work individually at first, then in pairs with a partner and finally in groups. For this activity, give the students a selected extract from a literary text.

Literary Analysis: Using Elements of Literature. Students are asked to write literary analysis essays because this type of assignment encourages you to think about how and why a poem, short story, novel, or play was written. To successfully analyze literature, you’ll need to remember that authors make specific choices for particular reasons. Your essay should point out the author’s choices and attempt to explain their significance. Another way to look at a literary analysis is to consider a piece of literature from your own perspective. NovelStudyNanberry.pdf. Aboriginal People of Coastal Sydney. Teachers_Notes_Nanberry.pdf. TG-9780732299439.pdf.