The Internet of Way Too Many Things. Among the items at Open House: 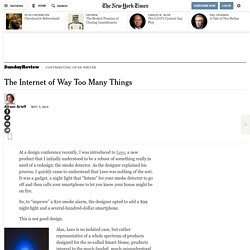 The-Internet-of-Things-A-Study-in-Hype-Reality-Disruption-and-Growt... We put a chip in it! ORIGIBOT: Remote Telepresence Robot w Gripper. ORIGIBOT is the ONLY affordable Telepresence robot that includes a robotic arm + gripper option! 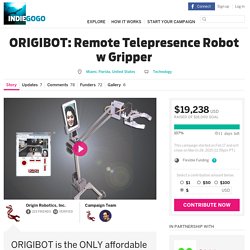 "A Telepresence Robot with a Gripping Arm? ORIGIBOT Is a Dream Come True" "We may not have robots roaming the streets quite yet, but if the Origibot has anything to do with it, that will soon become a reality" SPIN remote: The simplest most stylish remote ever. One remote for all your devices, free of all those buttons you never use. 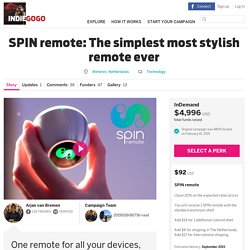 Do you remember when things were simpler? When you could operate a device with just 2 simple dials? Pantelligent: Intelligent Pan - Cook Everything Perfectly by Humberto Evans. Our Kickstarter campaign is now over, but you can find more information about Pantelligent and order your own on the Pantelligent website. 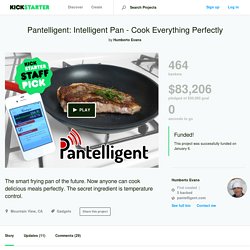 Frying pans have barely changed in thousands of years, but Pantelligent is the next evolutionary leap in the kitchen: a frying pan that actually helps you cook. Pantelligent has a temperature sensor inside it that communicates with the Pantelligent smartphone app. Together, the pan and the app guide you to cook everything perfectly, just the way a professional chef (or your mom!) Would cook it. Pebble Time Hits $1M On Kickstarter In Under An Hour - ReadWrite. It took only 20 minutes for the Time, the latest smartwatch from Pebble unveiled Tuesday at 7 a.m. 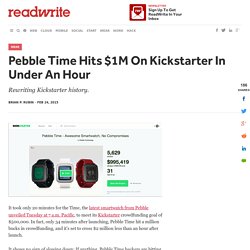 Pacific, to meet its Kickstarter crowdfunding goal of $500,000. In fact, only 34 minutes after launching, Pebble Time hit a million bucks in crowdfunding, and it's set to cross $2 million less than an hour after launch. Spark: Upgrade your lights with Wi-Fi and apps by Spark IO. TechCrunch: "The project aims to turn every lamp in your home into a web-based juggernaut. 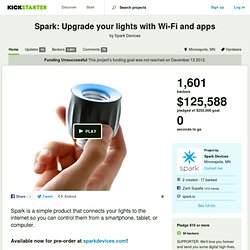 " WIRED Gadget Lab: "It's not hard to imagine using lights to display other types of data... " Fast Co Design: "It’s all pretty neat for everyday consumers, but it could be revolutionary for the deaf or hard of hearing. " Forbes: "A light bulb socket that lets you manage one light bulb (or more) from the internet is groundbreaking. " Let the Sun Shine In...Always & Forever with Sun LifeLight! by Gary D. Grimard. 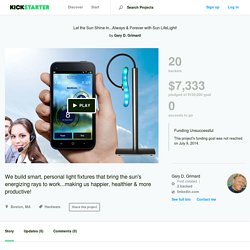 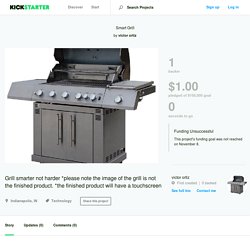 Habitat – Smart Home Automation And Internet Of Things by Habitat. The Hub also magnetically attaches to Habitat Park, so that it’s just one small device that sits in your home. 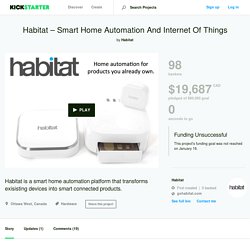 It's home automation without running extra wires or making modifications to your home. The Habitat Hub becomes the central nervous system for your smart home. We also strongly believe in product aesthetics, so we've designed the Habitat products to look great wherever they are in your home. Everything is easily controlled using the Habitat app on your smartphone or tablet. Smart Lamp by Isaac Sanchez. Lost in Translation: The Minimal Viable Product. Insight-Driven Innovation. This Conversation on the Future of Business is brought to you by SAP & MIT Technology Review Custom In responding to a question of this nature, it’s easy to pit human intuition against data, comparing and contrasting their relative strengths and arguing in favor of one over the other, the way one might argue for art over science. 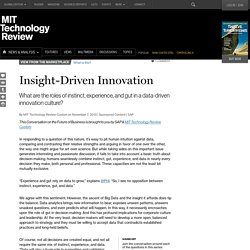 But while taking sides on this important issue generates interesting and passionate discussion, it fails to take into account a basic truth about decision-making: humans seamlessly combine instinct, gut, experience, and data in nearly every decision they make, both personal and professional. These capacities are not the least bit mutually exclusive. “Experience and gut rely on data to grow,” explains @Phil. “So, I see no opposition between instinct, experience, gut, and data.”

This is Part 6 of a six-part series examining each of these perspectives. For most people, the word “innovation” evokes images of inventors, new technologies and new products. Iconic images come to mind – the Model T, airplanes, computers, rockets, radios, TVs, cell phones and more. The list is endless, and the impact of these devices on the development of the modern world has been tremendous.

The 6 best (and 4 worst) smart-home products we saw at CES 2015. PTCVoice: The Risks And Rewards Of Smart Connected Products. Software-intensive products are growing so rapidly that many manufacturers now employ more software engineers in product development than in their IT departments. Many have more software engineers than mechanical engineers. Smart products, driven by software, are everywhere, from automobiles and aircraft to household appliances and children’s toys.

Software offers limitless opportunity for innovation. Smart Connected Products: Killing Industries, Boosting Innovation. “I work in the automobile industry.” “I work in the pet products industry.” “I work in the small appliance industry.” We make statements like these all the time. So often, that we rarely give any thought to the notion of how we are defining industries in the process. But we do have a way of defining them. Generally, industries are defined by what the organizations within them produce (e.g. automobiles, pet products, small appliances). The dumb state of the smart home. Shane Dyer is surrounded by a dozen or so home appliances made by a dozen or so different manufacturers. In his hand is a smartphone running a stylish app that can speak with every single one of them. It can turn on and off a series of light bulbs, check in on a smoke detector, and even change the temperature of a nearby fridge. It's a delicate, beautiful vision of the utopian smart home, and one that could hardly exist outside of his carefully crafted world.

But inside his utopia, Dyer is smiling. 12 Of The Best Ideas From CES 2014. I’ve been to the Consumer Electronics Show more times than I’d like to admit. And while it’s considered a showcase of technology to come in the next year, it’s a horrible experience. You’re basically cooped up inside a windowless casino where the blackjack tables have been swapped out for iPad case vendors. 99.9% of what you see isn’t worth breathing that stale, filtered air still laced with traces of tobacco and broken dreams. Yet there are always some jackpots if you dig deeply enough, a small handful of ideas that aren’t just interesting products, but serve as signposts pointing to the future of How Things Will Be. Here are our favorite ideas at CES 2014—consider it your cheat sheet to tomorrow. Best smart home devices of 2014.

The best smart home products you haven't heard of. The smart home is the future — and it's almost here. Tattletale Smoke Detector Knows When and What You're Smoking. Answering Question Zero: What is success and how do we measure it? CONNECTED-HOME: Forecasts And Growth. Welcome to Forbes. More Than a Billion Enterprise Devices Are on the Internet of Things. We hear a lot these days about the Internet of Things, everyday appliances connected to the Internet. Finding Success in the New IoT Ecosystem: Market to Reach $3.04 Trillion and 30 Billion Connected "Things" in 2020, IDC Says - prUS25237214. Says 4.9 Billion Connected "Things" Will Be in Use in 2015. Barcelona, Spain, November 11, 2014 View All Press Releases In 2020, 25 Billion Connected "Things" Will Be in Use Analysts to Explore the Disruptive Impact of IoT on Business at the Gartner Symposium/ITxpo 2014, November 9-13 in Barcelona, Spain. Growth In The Internet Of Things Market.

Internet of things: $8.9 trillion market in 2020, 212 billion connected things. The Internet of things and the technology ecosystem surrounding it are expected to be a $8.9 trillion market in 2020, according to IDC. In a nutshell, the Internet of things is the product of sensors, technology and networking all coming together to allow buildings, infrastructure and other resources to swap information. Strategic Choices in Building the Smart, Connected Mine. Founded in 1884, Joy Global is a leading producer of mining systems, equipment, parts, and services for underground and surface mining of coal, copper, iron ore, oil sands, gold, and other mineral resources. Invention and innovation: an introduction: 12.2 Technology push - OpenLearn - Open University - T307_1. The technology push model is a simple linear model that suggests that the innovation process starts with an idea or a discovery – it is sometimes called ‘idea push’ (Figure 51102). The%20Lean%20Startup%20.pdf.

Invention and innovation: an introduction: 12.2 Technology push - OpenLearn - Open University - T307_1. Fetch;jsessionid=4dcgirknbh4dh?url= Minimum Viable Product. Market Pull _ Technology Push. How To Build A Startup: The Lean Launchpad. The Lean Startup. “Startup success can be engineered by following the process, which means it can be learned, which means it can be taught.”- Eric Ries The Lean Startup provides a scientific approach to creating and managing startups and get a desired product to customers' hands faster. It's called "Ship" not "Shit". I knew there was an increasing problem with the culture in the design/startup community when individuals started introducing their products by talking about how quickly they’ve built them, rather than how efficiently and the quality of it after doing so.