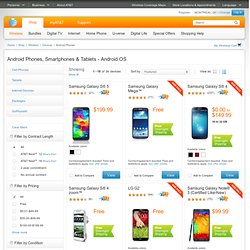 Torch 9800 Slider Phone. New BlackBerry 9800 Torch Slide Phone. BlackBerry Torch Review. About Us - Lookout Mobile Security. Lookout was founded in 2007 by John Hering, James Burgess, and Kevin Mahaffey with the premise that to properly protect people and enterprises from mobile attacks, we needed a new approach to security – one that is rooted in data analysis, operates at incredible scale and relies on predictive machine intelligence. 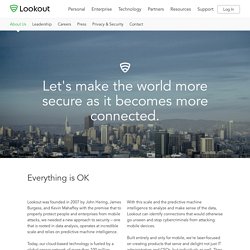 Today, our cloud-based technology is fueled by a global sensor network of more than 100 million sensors and tens of thousands of apps that are added daily – giving us access to virtually all the mobile code in the world. With this scale and the predictive machine intelligence to analyze and make sense of the data, Lookout can identify connections that would otherwise go unseen and stop cybercriminals from attacking mobile devices. Ask Maggie: On being patient and keeping smartphones secure. They say patience is a virtue. 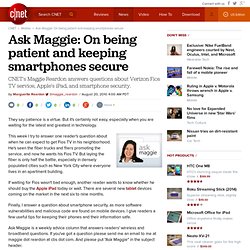 But it's certainly not easy, especially when you are waiting for the latest and greatest in technology. This week I try to answer one reader's question about when he can expect to get Fios TV in his neighborhood. He's seen the fiber trucks and fliers promoting the service, and now he wants his Fios TV. But laying the fiber is only half the battle, especially in densely populated cities such as New York City where everyone lives in an apartment building. If waiting for Fios wasn't bad enough, another reader wants to know whether he should buy the Apple iPad today or wait. Finally, I answer a question about smartphone security, as more software vulnerabilities and malicious code are found on mobile devices. Ask Maggie is a weekly advice column that answers readers' wireless and broadband questions.

Faster HSPA smartphones, modems coming soon. Blackberry thumb. BlackBerry thumb is a neologism that refers to a form of repetitive strain injury (RSI) caused by the frequent use of the thumbs to press buttons on PDAs, smartphones, or other mobile devices. 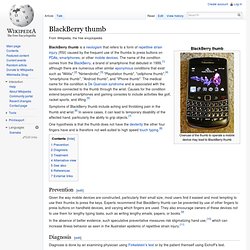 The name of the condition comes from the BlackBerry, a brand of smartphone that debuted in 1999,[1] although there are numerous other similar eponymous conditions that exist such as "Wiiitis",[2] "Nintendinitis",[3] "Playstation thumb", "cellphone thumb",[4] "smartphone thumb", "Android thumb", and "iPhone thumb". The medical name for the condition is De Quervain syndrome and is associated with the tendons connected to the thumb through the wrist. Causes for the condition extend beyond smartphones and gaming consoles to include activities like golf, racket sports, and lifting.[5] Symptoms of BlackBerry thumb include aching and throbbing pain in the thumb and wrist.[6] In severe cases, it can lead to temporary disability of the affected hand, particularly the ability to grip objects.[7]

Comparison of smartphones. Smartphone. A smartphone, or smart phone, is a mobile phone with more advanced computing capability and connectivity than basic feature phones.[1][2][3] Early smartphones typically combined the features of a mobile phone with those of another popular consumer device, such as a personal digital assistant (PDA), a media player, a digital camera, or a GPS navigation unit. 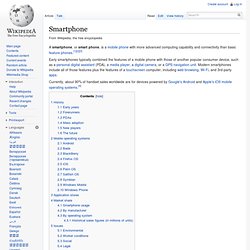 Modern smartphones include all of those features plus the features of a touchscreen computer, including web browsing, Wi-Fi, and 3rd-party apps. History[edit] Early years[edit] It's Time to Get Smart About Smart Phone Safety on Android. PARSIPPANY, N.J., Aug. 17 /PRNewswire/ -- A new Android productivity application - PhoneQ - is announced by Macrosoft, a leading-edge software design and development organization. 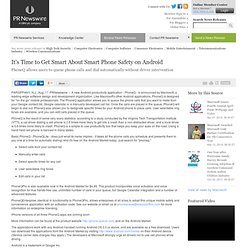 Like Macrosoft's other Android applications, PhoneQ is designed for "on the go" mobile professionals. The PhoneQ application allows you to queue the phone calls that you want to make from your Google contact list, Google calendar or a manually developed call list. Once the calls are placed in the queue, PhoneQ will begin to dial out. PhoneQ also allows you to designate specific times for your Android phone to place calls. Cell phones: A love/hate relationship - by Elizabeth M. Young. Elizabeth M Young's image for: "Cell Phones a Lovehate Relationship" Caption: Location: Image by: Humans do have a love/hate relationship with cell phones, whether they have a cell phone or not. 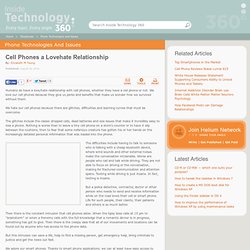 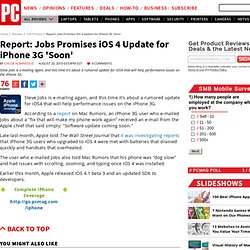 According to a report on Mac Rumors, an iPhone 3G user who e-mailed Jobs about a "fix that will make my phone work again" received an e-mail from the Apple chief that said simply: "Software update coming soon. " Biz Break: Want an iPhone or Android? Here's why you might have to wait. Posted: 05/02/2012 10:35:42 PM PDT0 Comments|Updated: about a year ago Congratulations! 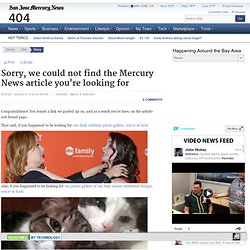 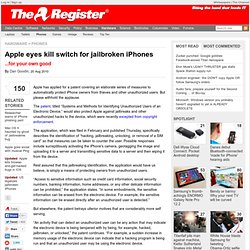 But please withhold the applause. The patent, titled “Systems and Methods for Identifying Unauthorized Users of an Electronic Device,” would also protect Apple against jailbreaks and other unauthorized hacks to the device, which were recently excepted from copyright enforcement. The application, which was filed in February and published Thursday, specifically describes the identification of “hacking, jailbreaking, unlocking, or removal of a SIM card” so that measures can be taken to counter the user. Motorola Droid 2 First-look Review. This Motorola model is the latest addition to the line of relatively large smartphones, roughly the same size as Verizon's HTC Droid Incredible and the HTC EVO 4G from Sprint.

It feels very solid in the hand, and weighty but not too heavy. The overall appearance of the device is both modern and blocky. Smartphone App Market To Be Worth $15B By 2013, Already $2.2B In First Half Of ’10. The mobile app market continues to grow by an incredible amount year after year, with new research estimating the entire market will reach $15 billion by 2013. Mobile research firm Research2guidance recently published a comprehensive report entitled “Global Smartphone Application Market Report 2010,” which was an update for the smartphone app market for the first half of 2010. Nokia n9 smartphone rumours tip up. New Smartphones, Tablet on the Way from LG. LG plans to launch 10 new smartphones and sell five million devices by the end of the year. In addition they will launch a tablet by the fourth quarter under the Optimus line.

Can staid BlackBerry survive the smartphone wars? Smartphones. Google Phone Review – Finally an Honest Nexus One Review. Google Phone Vs. iPhone: 7 Things Nexus One Has The iPhone Doesn't (PHOTOS) Droid Incredible. Features[edit] List of Android devices. Google announced that in Q3 2011, the total number of Android activations had surpassed 190 million, which was a significant increase from 135 million the previous quarter. The increase was boosted by sales of Android smartphones at lower prices from Chinese and Indian manufacturers.[2] As of 3 September 2013, there have been 1 billion Android devices activated.[3] Officially released[edit]

Nexus One. The device was sold SIM unlocked and not restricted to use on a single network provider. Google offered T-Mobile US and AT&T versions of the phone online in the United States before closing the online store in July 2010. A version for use on Vodafone (European) networks was announced on April 26, 2010, available in the UK on April 30, 2010.[15] On March 16, 2010, the Nexus One device became available on the Google web store for sale in Canada for use with most Canadian carriers.[16] In May 2010 Google announced the closing of the web store, with the intention to distribute the phone through partners around the world.[17] Android (operating system) Free and open-source operating system for mobile devices, developed by Google.