Short Passages for Rhetorical Analysis - Paragraphs for Analysis. These excerpts from essays, short stories, autobiographies, and novels--most of which were published over the past 50 years--illustrate some of the key stylistic traits of their well-known authors. 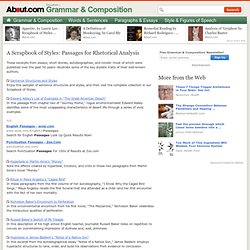 Sentence Structures and StylesEnjoy this sampler of sentence structures and styles, and then visit the complete collection in our Scrapbook of Styles. Edward Abbey's List of Examples in "The Great American Desert"In this passage from chapter two of "Journey Home," rogue environmentalist Edward Abbey identifies some of the most unappealing characteristics of desert life through a series of vivid examples. Hyperbole in Martin Amis's "Money"Note the effects created by hyperbole, tricolons, and crots in these two paragraphs from Martin Amis's novel "Money. " Nicholson Baker's Encomium to PerforationIn this unconventional encomium from his first novel, "The Mezzanine," Nicholson Baker celebrates the miraculous qualities of perforation.

Russell Baker's Sketch of Mr. Evan S. F. James W. Susan Orlean's Extended Metaphor: "Super-Duper" - Scrapbook of Styles. A staff writer for The New Yorker magazine since 1992, Susan Orlean has published several works of nonfiction, including The Orchid (1999), The Bullfighter Checks Her Makeup (2002), and My Kind of Place: Travel Stories from a Woman Who's Been Everywhere (2004). 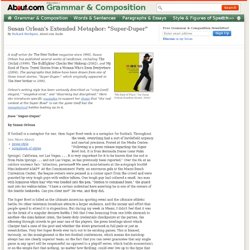 The paragraphs that follow have been drawn from one of these travel stories, "Super-Duper," which originally appeared in The New Yorker in 1995. Orlean's writing style has been variously described as "crisp [and] elegant," "snapshot-vivid," and "disarming but disciplined. " Here she introduces specific examples to support her thesis that "the real contest at the Super Bowl" is not the game itself but the metaphorical battles leading up to it. from "Super-Duper" by Susan Orlean If football is a metaphor for war, then Super Bowl week is a metaphor for football. See also: extended metaphor.

"Why Are Beggars Despised?" by George Orwell - Essay by Orwell - Classic British Essays. Best known for his novels Animal Farm (1945) and Nineteen Eighty-four (1949), George Orwell (pseudonym of Eric Arthur Blair) was one of the most notable political writers of his day. 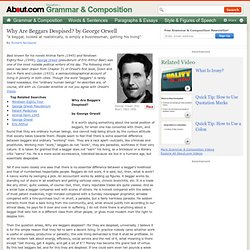 The following short piece has been drawn from Chapter 31 of Orwell's first book, Down and Out in Paris and London (1933), a semiautobiographical account of living in poverty in both cities. Though the word "beggars" is rarely heard nowadays, the "ordinary human beings" he describes are, of course, still with us. Consider whether or not you agree with Orwell's thesis. Why Are Beggars Despised? By George Orwell It is worth saying something about the social position of beggars, for when one has consorted with them, and found that they are ordinary human beings, one cannot help being struck by the curious attitude that society takes towards them. Yet if one looks closely one sees that there is no essential difference between a beggar's livelihood and that of numberless respectable people.