'Smart City' knows who needs power, and when. Fast forward to the present day and although technology has changed immeasurably, the way we power our cities hasn't. 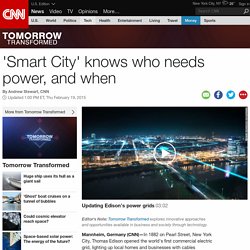 But what if we could bring the grid up to date? That's exactly what they are doing in Mannheim, Germany. Germany has extensive local renewable energy production, but renewable energy sources aren't always available when and where needed. To match energy supply with demand, Mannheim uses broadband power line technology to transmit consumption and supply data over the power grid itself. That allows energy supply to be adjusted, so that energy is consumed where it's produced and when it's available. The smartest cities rely on citizen cunning and unglamorous technology. Book of the Day: Smart Cities as Democratic Ecologies. Book: Smart Cities as Democratic Ecologies. 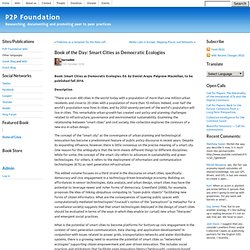 Ed. by Daniel Araya. Palgrave Macmillan, to be published fall 2014. Description “There are over 400 cities in the world today with a population of more than one million urban residents and close to 20 cities with a population of more than 10 million. Indeed, over half the world’s population now lives in cities, and by 2050 seventy percent of the world’s population will live in cities. Designing the Smart Bank. We recognize that change is no small task for Canada’s big banks. 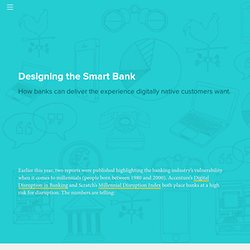 Industry regulations, legacy technical systems, and cumbersome internal processes make banking innovation difficult. But not impossible. Using customer needs as their compass, banks like Tangerine are successfully chipping away at the industry anchors that have caused them to lose pace with their younger customers. And their Overall Customer Satisfaction Index Scores prove that it’s been worth the effort as they lead all midsize banks. We believe design thinking and customer empathy is the means by which big Canadian banks can begin to change, both externally and internally. The opportunities to use customer data to recommend the right lending, investment or insurance product, in the right context, and from a position of trust will make it worth the effort as today’s 20-somethings become tomorrow's entrepreneurs, home owners, parents and retirees. Change won’t be easy. Let’s build the Smart Bank together.

The Smartest Cities In The World. Over the past several years, the idea of the being "smart" has emerged as a key mechanism for cities to find innovative solutions to the challenges that they are facing. 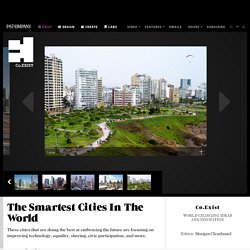 Increased demand for infrastructure, housing, transportation, jobs, energy, food and water are all straining city governments and infrastructure, as people around the world flock to urban centers in hopes of a better life and more opportunity. For many years, the push to create smarter cities was led by technology companies looking for uses (and buyers) for their products. But in recent years, cities have begun to think more holistically about what being a smart city could mean, and have innovated new ways to modernize how a city serves its citizens. Biomatrix Water. Singapore unveils plan in push to become smart nation. SINGAPORE--The Singapore government has introduced a slew of initiatives as part of its goal to become the world's first smart nation, including a smart nation operating system, Internet of Things scheme targeted at homes, and pilot trials at a designated residential-business estate. 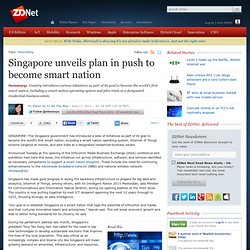 Announced Tuesday at the opening of the Infocomm Media Business Exchange (imbX) conference and exhibition held here this week, the initiatives cut across infrastructure, software, and services identified as necessary components to support a smart nation blueprint. These include the need for continuing enhancements to the nationwide broadband network (NBN) and national wireless network Wireless@SG. Green MashUP: the rise of biophilic cities. In recent years, we have seen a movement towards biophilic cities – ones that incorporate nature into urban design. 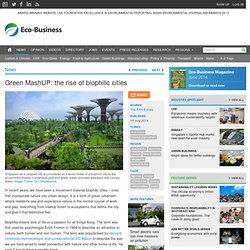 Dawn of the Smart City? How Crowdsourcing And Machine Learning Will Change The Way We Design Cities. In 2011, researchers at the MIT Media Lab debuted Place Pulse, a website that served as a kind of "hot or not" for cities. 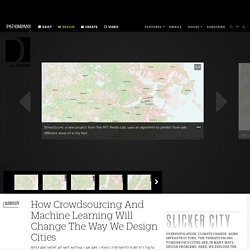 Given two Google Street View images culled from a select few cities including New York City and Boston, the site asked users to click on the one that seemed safer, more affluent, or more unique. Synchronized Cities: Leveraging Sensors to Optimize Urban Activity. Sensing technologies increase the efficiency of basic services like food distribution, while raising questions about the value of serendipity. 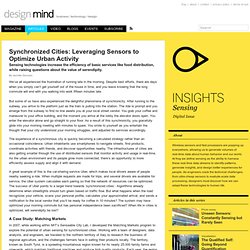 Sensors and Citizens: Finding Balance in the New Urban Reality. By Todd Douglas Taylor You have a front row seat. 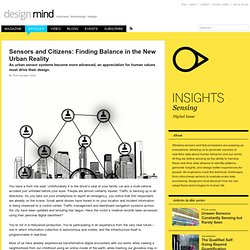 Unfortunately it is the driver’s seat of your family car and a multi-vehicle accident just unfolded before your eyes. People are almost certainly injured. Traffic is backing up in all directions. As you take out your smartphone to report an emergency, you notice that first responders are already on the scene. Most of us have already experienced transformative digital encounters with our world: while viewing a neighborhood from our childhood using an online model of the earth; while trashing our glovebox map in favor of a dashboard computer voice; or while being informed of a friend’s current location and activity by our smartphone. Tvilight - Intelligent Street Lighting Solutions. TVILIGHT Intelligent Lighting Solution.