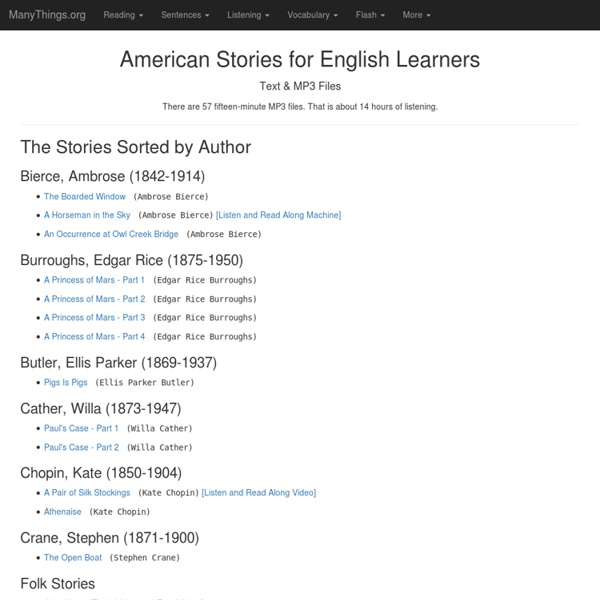 The Lady, or the Tiger? (Frank R. Stockton) Text & MP3 File www.manythings.org/voa/stories Download MP3 Now, the VOA Special English program, AMERICAN STORIES. We present the short story "The Lady, or the Tiger?" by Frank R. Boy wears skirt to school in protest against 'discrimination' ''We think that this discriminates against boys. I will march in a skirt with other boys waving banners and making a lot of noise. ''I will be wearing the skirt at school all day in protest at the uniform policy and addressing the assembly with the student council, wearing a skirt.'' Teachers at Impington Village College imposed a ban on boys' shorts two years ago following consultation with parents and teachers. But when aspiring politician Chris joined the school he was outraged by the policy and pledged to overturn the ban.

Advanced level English - C1 and C2 reading resources for students & teachers Advanced English reading texts - level C1 May 2020 : CORONAVIRUS LOCKDOWN ? Discover Linguapress online learning resources. The Lottery The classic short story about conformity and tradition in America. The morning of June 27th was clear and sunny, with the fresh warmth of a full-summer day; the flowers were blossoming profusely and the grass was richly green. The people of the village began to gather in the square, between the post office and the bank, around ten o'clock; in some towns there were so many people that the lottery took two days and had to be started on June 2th. but in this village, where there were only about three hundred people, the whole lottery took less than two hours, so it could begin at ten o'clock in the morning and still be through in time to allow the villagers to get home for noon dinner. The children assembled first, of course. Soon the men began to gather. surveying their own children, speaking of planting and rain, tractors and taxes. They stood together, away from the pile of stones in the corner, and their jokes were quiet and they smiled rather than laughed.

London receptionist 'sent home for not wearing heels' A London receptionist was sent home from work after refusing to wear high heels, it has emerged. Temp worker Nicola Thorp, 27, from Hackney, arrived at finance company PwC to be told she had to wear shoes with a "2in to 4in heel". When she refused and complained male colleagues were not asked to do the same, she was sent home without pay. Outsourcing firm Portico said Ms Thorp had "signed the appearance guidelines" but it would now review them.

ESL Reading Worksheets - Short Stories - Free Arbor Day - Marla and Tio plant a tree in the yard. Breakfast - Jack has high cholesterol and has to stop eating donuts. Bus Driver - Adan wants to retire next year when he turns sixty-two. Camping - Bears take over a campsite! Car Accident - Oh, no! The Adventures of Aladdin One day, as he was looking for wild figs in a grove some way from the town, Aladdin met a mysterious stranger. This smartly dressed dark-eyed man with a trim black beard and a splendid sapphire in his turban, asked Aladdin an unusual question: "Come here, boy," he ordered. "How would you like to earn a silver penny?" The Brothers Grimm Once upon a time . . . a widow had an only son whose name was Aladdin. They were very poor and lived from hand to mouth, though Aladdin did what he could to earn some pennies, by picking bananas in faraway places.

Sweden male train drivers wear skirts after shorts row A dozen male train drivers in Sweden have circumvented a ban on shorts by wearing skirts to work in hot weather. The workers, who operate the Roslagsbanan line north of the capital Stockholm, have been wearing skirts to work for the past two weeks. Employer Arriva banned the drivers from wearing shorts after taking over the running of the line in January. But the company has given the men its blessing to wear skirts, according to local newspaper Mitti. "Our thinking is that one should look decent and proper when representing Arriva and the present uniforms do that. If the man only wants [to wear] a skirt then that is OK," Arriva communications manager Tomas Hedenius told the paper.