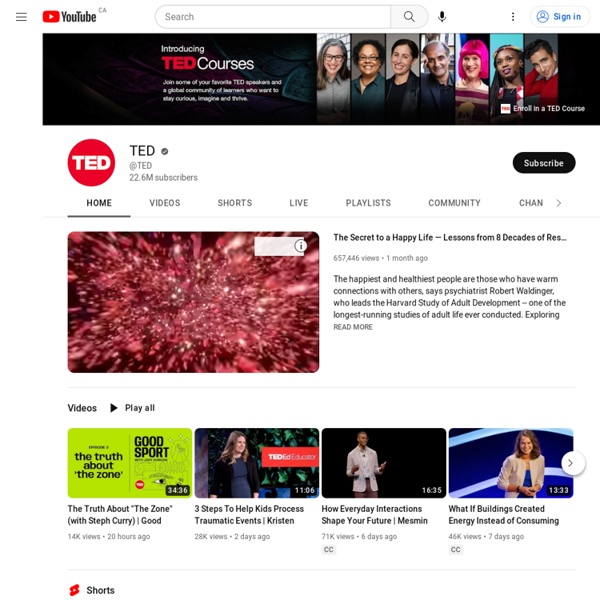 Why do some people do selfless things, helping other people even at risk to their own well-being? Psychology researcher Abigail Marsh studies the motivations of people who do extremely altruistic acts, like donating a kidney to a complete stranger. Are their brains just different? TEDTalks is a daily video podcast of the best talks and performances from the TED Conference, where the world's leading thinkers and doers give the talk of their lives in 18 minutes (or less). Look for talks on Technology, Entertainment and Design -- plus science, business, global issues, the arts and much more.Find closed captions and translated subtitles in many languages at

My hero: Noam Chomsky by Charles Glass "My heroes have always been cowboys," Willie Nelson sang, a sentiment I shared when I was a child in California. My hero in my teenage years, while most of my contemporaries were demonstrating against the US war in Vietnam, was the greatest cowboy star of them all, John Wayne. When I was 16, he gave me a job. I admired him, and I still do. Designing a digital Breakout Box tools- Login to CSD Docs to view! One account. All of Google. Sign in to continue to Google Drive Find my account Forgot password? Sign in with a different account Create account Philosophy for Children and P.E.A.C.E. Course Overview This course is brought to you by the Department of Humanities and the Philosophy for Children Course at University of Naples, Federico II and the PEACE project, a LLL/Comenius project that offers training in the use of philosophical enquiry in the curriculum to foster a cosmopolitan mindset in young people It aims to demonstrate how important philosophy is to the development of critical and creative thinking. It aims to show teachers how they can use stories, sketches and games to translate the complexity of philosophical enquiry into manageable and profitable discussion with the children in their classes. The course looks at the background and theory behind P4C, and then introduces the method and approach used.

Thinglink- create annotated images- connect text, images, and links on a topic ThingLink for teachers and schools Create visual experiences for student-centered learning Start now Trinity & Beyond movie by Peter Kuran The ultimate film about weapons of mass destruction On July 16, 1945, at a site called Trinity, a plutonium bomb was assembled and brought to the top of a tower. The bomb was detonated, producing an intense flash and a fireball that expanded to 600 meters in two seconds. The explosive power was equivalent to 20 kilotons of TNT. Tit for tat In Western business cultures, a handshake when meeting someone is an example of initial cooperation. Tit for tat is an English saying meaning "equivalent retaliation". It is also a highly effective strategy in game theory for the iterated prisoner's dilemma.

Pinterest- a great way to save ideas in one place and get inspiration These high-interest middle school nonfiction passages are winners. Teach Your Child to Read - Flagging strategies for reading comprehension. They put the flags directly into the book while reading. - Give Your Child a Head Start, and.Pave the Way for a Bright, Successful Future. Short Passages - Use for high reading groups Teach Your Child To Read Fast - Are parents always asking you how they can help their students become better readers? This list of questions is a quick way to help! Online Music Piracy Doesn’t Hurt Sales, European Commission Finds New research published by the European Commission's Joint Research Centre shows that online piracy doesn't hurt digital music revenues. The researchers examined browsing habits from 16,000 Europeans and found that there's a positive link between online piracy and visits to legal music stores, irrespective of people's interest in music. The study concludes that the music industry should not see piracy as a growing concern. Research into online piracy comes in all shapes and sizes, often with equally mixed results. The main question often is whether piracy is hurting sales. A new study by The Institute for Prospective Technological Studies, which is part of the European Commission’s Joint Research Centre, tackled this question in a unique way.