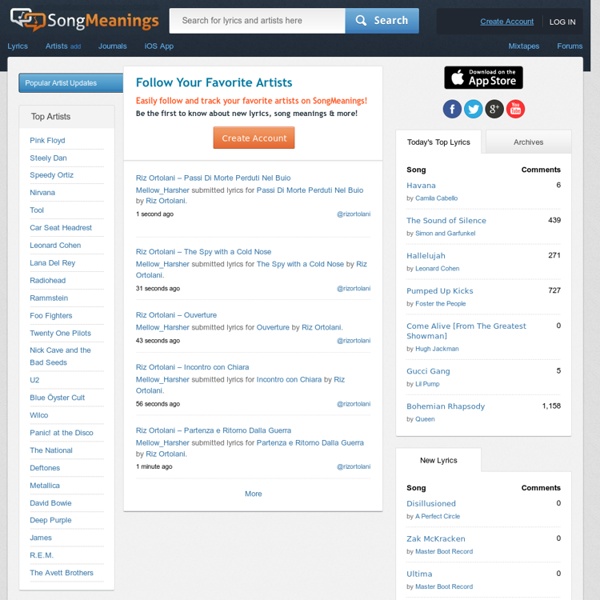 Folk Music of England, Scotland, Ireland, Wales & America Welcome to Lesley Nelson-Burns' (aka the Contemplator)'s Folk Music Site.Folk and Traditional Music and Popular Songs, with Lyrics, Midi, Tune Information and History behind the folksongs and ballads. Irish, British and American Folk Music including Francis J. Child Ballads and Sea Shanties. The background music is Spanish Ladies Sequenced by Lesley Nelson-Burns How To Make Electronic Music - StumbleUpon To be honest, I’m not sure what this sound is specifically… Some may call it bass, some may say it’s more like a lead, but it’s definitely something you can hear in many Electro House tracks. I got the inspiration for this while listening some sample cd’s and after experimenting with FL Studio this is what I came up with: Is this something in a style of Mode Selektor, Daft Punk, etc? You tell me.

A Five-Minute Activity to Bring Music into the Classroom Wouldn’t you like to be listening to the latest hit on the radio and find out that you are able to understand the lyrics?Wow!!! Don’t you, every now and then, sing along even though you can only remember some of the words from the chorus and you don’t have the slightest clue about what it means? I’m sure you do! We have all been there!

ESL Lesson Plans and Resources on Music March is Music in our Schools Month! There has never been a better excuse to get up and dance with your students. To encourage you to bring music into your classroom throughout the year, we’ve created a collection of useful links. These links are full of ideas for using music in the classroom. You will find lesson plans, teacher reflections, books, webinars, website reviews, and more. Boogie Nights: A History Of Funk In Dayton During the 1970’s, a new genre of music called funk was making its way into the American mainstream and Dayton, Ohio was at the epicenter. Community Voices Producer Basim Blunt says that more funk bands came from Dayton, than any other place in the world. This story is about the world famous funk bands that hailed from the city’s West Side, and one community’s attempt to honor their legacy before the music fades. “I used to watch the Ohio Players practice when I was a kid in a garage,” says Daytonian Harold Remblert, Jr.

BOB DYLAN When I heard the news of the Nobel Prize in Literature awarded to Bob Dylan, I couldn’t help rejoicing and being delighted as I grew up listening to his great songs and when I was in high school – quinta ginnasio with my beloved and innovative teacher of Italian Mrs. Cattaruzza – we listened to his song Blowing in the Wind and discussed its meaning as an example of poetry. Therefore I couldn’t miss the opportunity to share some insights with you, my dear students.

1,197 ESL Songs For Teaching English Worksheets Music can be a great way to connect with your students. Even students who aren’t fluent in English often know the words of popular songs phonetically, which makes these songs ideal resources for teaching your students certain forms of grammar, as well as vocabulary. Many students are happy to work with the unusual phrasing of song lyrics, because they’re learning new meanings for a piece of music that already has meaning in their lives. You might never have noticed it before, but many songs’ lyrics involve just one single tense - which means that as soon as you find a song that contains the tense you want to teach, you’ve got the makings of an exercise that your students will love. They’ll get to brag to their non-English-speaking friends that they know exactly what the song’s lyrics say, so they’ll be extra-motivated to stick with you throughout the activity to make sure they learn those meanings correctly.

Stories Behind David Bowie's Songs Over six decades on from his debut record (“Liza Jane” by his first group, The King Bees), David Bowie is arguably the most vital musician of his generation. Aside from his daring sonic explorations (in a little over the last decade alone, there was the drums ’n’ bass of Earthling and the innovative concept art of Outside), Bowie has diversified to pursue other interests (as far back as 1972 he said, “I’m not content to be a rock ’n’ roll star all my life”). In recent years he’s been an Internet service provider and web host, journalist, wallpaper designer, photographer, painter, actor and one-man corporation (in 1997, he became the first pop star to offer himself as a share issue, with “Bowie Bonds”).

Russian photographers secretly scale Pyramids to capture gorgeous images Russian photographer Vadim Makhorov caused quite a stir this week when he published a set of stunning images captured from atop Egypt's Great Pyramid. The photos, posted to Makhorov's LiveJournal page, provide a rare view of one of the Seven Wonders of the Ancient World, though they've fueled a fair bit of controversy, as well. Once the pyramids complex had closed to tourists, Makhorov and his two friends, Vitaliy Raskalov and Marat Dupri, staked out for nearly five hours, hiding themselves from Egypt's armed guards.

The Best Music Websites For Learning English Check out my New York Times post for English Language Learners focuses on using music for language development and includes a student interactive, video, and teaching ideas. I use music a lot in my teaching of English Language Learners. I thought people might find it helpful to see which sites I believe to be the best out there to help teach English — Beginning, Intermediate, and Advanced — through music. My students have certainly found them helpful. Music is a familiar, fun, and engaging tool to use in learning a second language. This list includes sites that have music to listen to, activities for students to do, and ways for them to create their own.

How to use songs in the English language classroom What makes for a successful song-based lesson? Adam Simpson, second-time winner of the British Council’s Teaching English blog award for his post on conditionals (written with Paul Mains), explains. One of the big problems we all face, whether teaching English to children or adults, is maintaining learners’ interest throughout our lessons. Consequently, we often have to be very creative in the techniques we use. What makes music such a great teaching tool is its universal appeal, connecting all cultures and languages.