The Mary Sue - A Guide To Girl Geek Culture 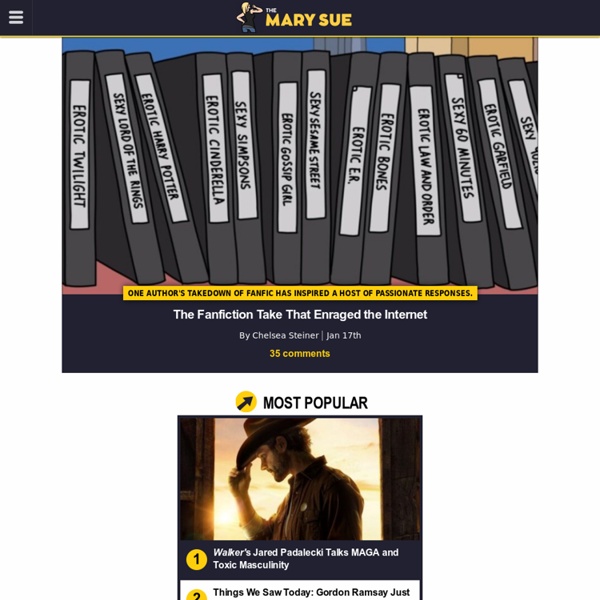 Funzine Sophie Howard, Daisy Watts, Stacey Massey & Leah Francis Reacties op “Sophie Howard, Daisy Watts, Stacey Massey & Leah Francis” Laura zegt: 15/04/2011 om 12:58 WOW chris zegt: 15/04/2011 om 18:13 WOW these chicks are so hot and have such nice “assets” adina zegt: 19/04/2011 om 14:01 Wow, ok its really sad to see that these girls have such low self respect, what a great example to set for other young ladies with self esteam issues. “If you don’t feel right about yourself, take your cloths off and everyone will pay attention to you” way to go ladies! Your well on your way to creating the next generation of whores who can follow in your foot steps erik zegt: 19/04/2011 om 20:33 ok there buzz killington. adina maybe it is you who is insecure because I love it when ladies are secure enough about themselves to take photoshoots like this.

64 Things Every Geek Should Know If you consider yourself a geek, or aspire to the honor of geekhood, here’s an essential checklist of must-have geek skills. The term ‘geek’, once used to label a circus freak, has morphed in meaning over the years. What was once an unusual profession transferred into a word indicating social awkwardness. As time has gone on, the word has yet again morphed to indicate a new type of individual: someone who is obsessive over one (or more) particular subjects, whether it be science, photography, electronics, computers, media, or any other field.

8 Real Women Who Deserve Their Own Movies Hollywood, we have to talk. I’ve spoken to every ticket-buyer in America and we’ve all decided that you need to make more movies about badass women. Like, starting yesterday. Oh sure, every now and then you will throw us a Salt or maybe even a Salt II, but face it, Hollywood, many of your attempts at a woman-driven action movies have been half-assed at best and soul-crushingly awful at worst (see Electra, Street Fighter: The Legend of Chun-Li, or, dear God, Sucker Punch). It should not be that hard, Hollywood. All we, the ticket-buying public of America want is a good story about a woman or a bunch of women who fight and shoot and do other badass things badassedly.

The Art of Non-Conformity Challenging Authority Since 1978 I am a writer, traveler, and entrepreneur with the goal of visiting every country in the world while connecting with other world-changers. Continue reading about Chris Mission Accomplished! DIY Idea: Rainbow Melted Crayon Art & Man Made DIY Artist and designer Jessica Kerbawy creates these amazing rainbow wall art pieces by gluing a spectrum of crayons on foam core, and then strategically melting them with a heat gun. The paper wrappers are left atop, with the remains of the colored wax dripping down. Though it may look like something you've seen before, I find these to be pretty clever and unique, and an update on the playing with melted wax and rainbow techniques.

Top 10 Geek List This is the mother of all top 10 geek lists. We just scoured around and put together a list of all the Top 10 stuff you would find interesting. Starting first with our own Top 10 Geek Movies. Top 10 Geek Movies Top 10 Worst Gadgets 2005 Asking For It? As If! Not Ever, a project of Rape Crisis Scotland, has launched an amazing new ad campaign . A man in a bar glances over at a pretty girl and a short skirt and leers "She's asking for it." Cut to the woman shopping for skirts at a clothing store. Unable to decide between two skirts, she explains to the clerk "I'm going out tonight, and I want to get raped.

Reconsidering the Feminism of Joss Whedon The facts are these: Joss Whedon is lauded as being one of the most forward-thinking show creators and writers currently wielding his craft today. The famous exchange between Whedon and a reporter – Why do you write these strong female characters? Because you’re still asking me that question – is bandied around the internet on a frequent basis.