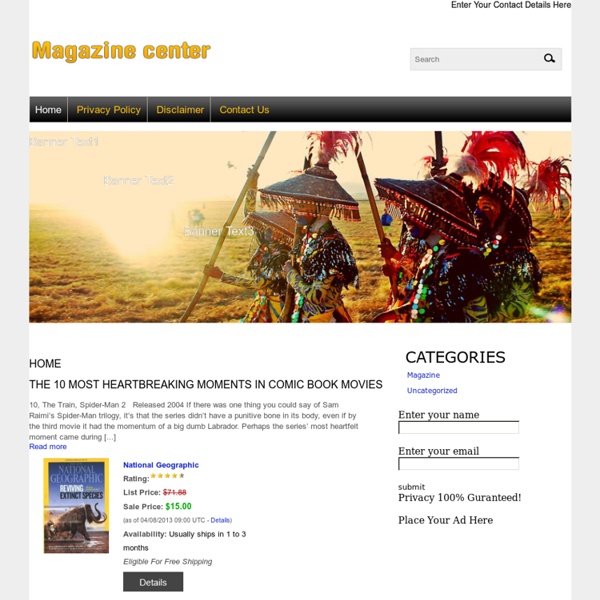 Downloads « Videoscripts Most Popular Downloads Windows with User Interfaces Handbrake Batch Encoder The all singing all dancing batch Encoder user interface front end for handbrake, most fileformats, metadata and loads of advanced features Check out all of the features here Read how to use it here Smart tips to make life easier Posted on February 24, 2012 in Humor If you’re new here, you may want to subscribe to our RSS feed or follow us on Facebook or Twitter . Thanks for visiting! Rate this Post (16 votes, average: 5.00 out of 5) The 100 Best, Most Interesting Blogs and Websites of 2012 (Categorized) Editor’s note: 2015’s list of the best, most interesting websites has arrived! I don’t know about you, but I’m constantly running into so many cool websites I want to remember or recommend to people but I don’t always have time to make a note of them, add them to Evernote, bookmark them in Delicious, etc. So this is a good example of a post I created as a personal (and completely unscientific) resource that other people will probably benefit from as well. Some of these sites are pretty new while others have been around for a while now, but they are all awesome right now in 2012.

Poetry 180 - Home Page Welcome to Poetry 180. Poetry can and should be an important part of our daily lives. Poems can inspire and make us think about what it means to be a member of the human race. List of lists of lists Some articles that consist of a list of things that are themselves about lists of things, such as the lists of lists listed below. General reference[edit] Culture and the arts[edit] Literature[edit] Art and the arts[edit] Performing arts[edit]

Minimal Boolean Formulas 28. That's the minimum number of AND or OR operators you need in order to write any Boolean function of five variables. Alex Healy and I computed that in April 2010. The Lion Whisperer Toronto Star Picture Editor Wanda Goodwin shares these delightful images of Kevin Richardson a.k.a "The Lion Whisperer." A new film opening soon in The United States about a rare white lion who escapes becoming a trophy on a wall, is a rare happy ending in a country where more than 1,000 lions are killed legally each year. Kevin Richardson, the man behind the movie, calls himself an "ambassador of lions" and hopes the film will act as one too at a time when foreign tourists are willing to pay up to $40,000 to shoot a big cat. Kevin Richardson, a.k.a. the Lion Whisperer lays with two of his lions on October 11, 2010, in their enclosure at the Kingdom of the White Lion park in Broederstroom, South Africa. (AP Photo/Denis Farrell) Kevin Richardson sprays his lions with water and citronella in their enclosure.