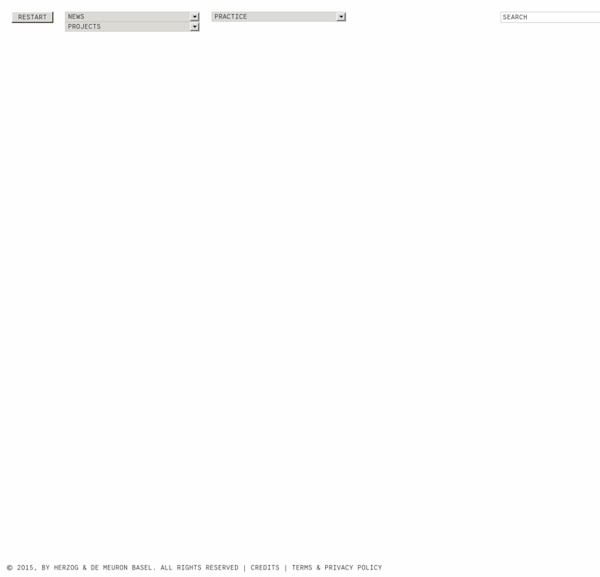 Herzog & De Meuron cultural complex luz . sao paulo Cultural Complex Luz will be an important addition to Latin America’s largest cultural district, which currently includes the São Paulo Concert Hall, the Free University of Music, the São Paulo State Pinacoteca, the Júlio Prestes train station, Luz Park, the Museum of Portuguese Language, and the Museum of Sacred Art. Together they will form an urban necklace of alternating green spaces and buildings which will establish a new cultural destination closely connected to the Campos Elíseos region, a central area in São Paulo. The project is also part of a larger operation to regenerate Luz - one of the most dilapidated areas in the city. By combining education, culture, arts and events, the Cultural Complex Luz aims to bring enhancements to the surrounding neighbourhood.

Vitra Unveils Its Stunning New Museum [UPDATED WITH 3-D TOUR] The Vitra campus in Weil am Rhein, Germany, is already a mecca for contemporary architecture, featuring a design museum by Frank Gehry, a conference center by Tadao Ando, and another building on the way by SANAA. And they've just finished what might be the greatest of them of them all: a new building, designed by Swiss architects Herzog & de Meuron, to showcase the company's home-furniture collection. UPDATE: Vitra has now thrown up an amazing series of 3-D images of the museum, offering you the next-best thing to actually visiting the building. A couple screen-caps: Herzog & de Meuron--who made a global splash in 2008 with their "Bird's Nest" stadium for the Beijing Olympics--conceived of the building as an "ur-house." The individual volumes take the form of generic, A-frame houses, which are then stacked on top of each--creating an architectural symbol of Vitra's actual business, selling high-design through mass production.

Herzog & de Meuron signal box . basel On the edge of railway tracks, next to the new railway engine depot and the old walls of the Wolf-Gottesacker (cemetery) from the eighteenth and nineteenth centuries, there is a tall, copper volume containing the signal box. On six floors, there is mainly electronic equipment for the control of points and signals to the depot and the related tracks, as well as a few workstations and their ancillary spaces. The building's concrete shell is insulated on the exterior and wrapped with approximately 20 cm-wide copper strips that are twisted at certain places in order to admit daylight. As a result of the copper coiling, the building acts as a Faraday cage protecting the electronic equipment inside from unexpected external effects. At the same time, it is also able to express vividly these physical qualities. Herzog & de Meuron Team: Partners: Jacques Herzog, Pierre de Meuron, Harry Gugger Project Architect: Philippe Fürstenberger Project Team: Klaus Loehnert, Hans- Ulrich Suter

Winners of the eVolo Skyscraper Competition 2012 eVolo Magazine has unveiled the winners of its 2012 Skyscraper Competition. The first place was awarded to Zhi Zheng, Hongchuan Zhao and Dongbai Song from China for their project "Himalaya Water Tower." The proposal is a skyscraper located high in the Himalayan mountain range that stores water and helps regulate its dispersal to the land below as the mountains' natural supplies dry up. The skyscraper, which can be replicated en masse, will collect water in the rainy season, purify it, freeze it into ice and store it for future use. The second place was awarded to Yiting Shen, Nanjue Wang, Ji Xia, and Zihan Wang from China for their project "Mountain Band-Aid", a design that seeks to simultaneously return the displaced Hmong mountain people to their homes and work as it restores the ecology of the Yunnan mountain range. Sponsored Links

Herzog & de Meuron tate modern tanks . london Tate Modern Tanks . London + Herzog & de Meuron . photos: © Iwan Baan Initiated in 2005, the first phase of Tate’s expansion programme – The Tate Modern Project - begins with the opening of Tate Modern’s Tanks dedicated to exhibiting live art, performance, installation and film works. Lofted Forest Home: Organic Curves & Natural Materials Good things come to those who wait – particularly in a work of uniquely detailed and highly curved architecture. Nearly a decade in the making, this structure by Robert Harvey Oshatz is much like a tree house – lofted toward the top of the canopy around it – only bigger, grander, more complex and curved than most any tree house in the world. The perimeter of the structure is pushed out into the forest around it, curving in and out to create views as well as a sense of intimacy with the coniferous and deciduous tree cover.

Herzog & de Meuron - museu blau . museum of natural sciences . barcelona Relocating the Museum of Natural Sciences into the Forum Barcelona building signals the beginning of a new life cycle for both institutions: one where each mutually benefits from the space, program and potential of the other. With its large exterior and interior spaces and its reference to natural processes and shapes, the architecture of the Forum is a particularly appropriate new home for the relocated Museum. And the Museum of Natural Science promises to energetically revitalise the existing building, replacing vacant space with intense new public activities. The open public space that marks the approach from the Diagonal and extends under the triangular body of the building is now diversified and activated, engaging with the life of the city. The corner addressing the city centre retains its function as the main public approach. Ver mapa más grande

ZAHA HADID: THE FIRST GREAT FEMALE ARCHITECT This weekend Tokyo won the bid for the 2020 Olympics—more good news for Zaha Hadid, who is designing the new national stadium. Five years ago, we published a profile by Jonathan Meades saying, "The world is waking up to her" From INTELLIGENT LIFE magazine, Summer 2008 ZAHA HADID'S PRACTICE occupies a former school in Clerkenwell, an area of London that still bears the scent of Dickens. It's an 1870s building designed by the London School Board architect E.R. Robson, who, typically of his profession, was unquestionably formulaic.

Calabar International Convention Center The multi-functional and flexible building will also offer the citizens of Calabar a new cultural centre that will provide the setting for concerts, film festivals and exhibitions. The Calabar International Convention Centre consists of four adjoining, sculptural volumes. The building is situated on top of a hill and has a panoramic view from the foyer. On the one side, the location on the middle of the hill creates a natural amphitheatre with a room for several thousand people. On the other side, you have a spectacular view of the river delta. The volumes are cast in concrete and appear as sharply cut. Herzog & de Meuron - roche building 97 . basel Roche Building 97 . Basel Herzog & de Meuron . roche . photos: © F. Hoffmann-La Roche Ltd.