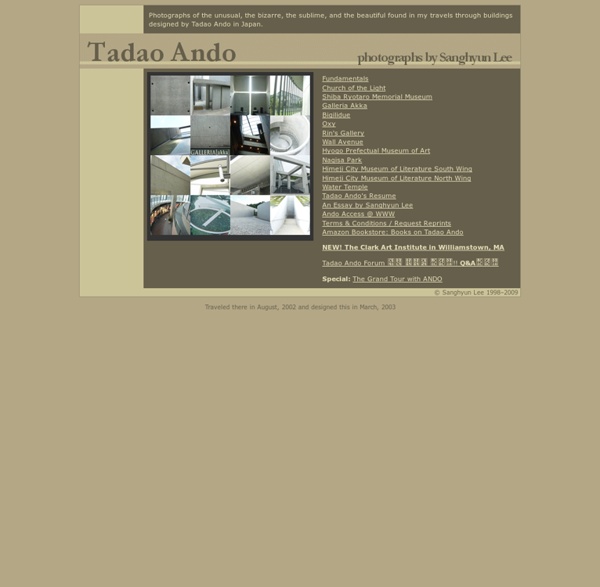 The Fundació Mies van der Rohe Exhibitions The Mies van der Rohe Foundation regularly organises itinerant exhibitions documenting its own Architecture Awards, and others featuring modern and contemporary architecture in general from either a historical or present-day point of view. To this end, exhibitions devised by the Foundation itself are combined with those organised jointly with entities that pursue similar aims. Cycles of lectures The format of the "cycle of lectures" is designed to examine a current theme in a number of sessions, the aim of which is to offer as comprehensive an overview as possible of the state of the question. The cycles of lectures are related to other Foundation programmes and are complemented by activities such as installations and exhibitions.

Gehry Partners, LLP AD Classics: Church on the Water / Tadao Ando “You cannot simply put something new into a place. You have to absorb what you see around you, what exists on the land, and then use that knowledge along with contemporary thinking to interpret what you see.” This philosophy of Tadao Ando is ever apparent in his design, as he is celebrated for the attention he pays to nature and the relationship between interior and exterior spaces of his buildings. Bohlin Cywinski Jackson This is a time in which belief is often overwhelmed by exponential change. Even in the most serious architectural circles, intellectual games and superficial dogma can take the place of affirmation, and the mediocrity and deadness of much of our environment continue to spread. Yet, in all of our surroundings there is great richness and power. Belief in the sensuality of place, the emotive qualities of materials, and the ability to give pleasure and insight, to comfort, and to transport, can produce humane and spirited architecture. It is our belief that exceptional architecture comes from the search for solutions which respond to the particular circumstances inherent in each situation. Increasingly, we have come to see that, in a sense, circumstances are infinite and that working within any one set of habits is too limiting.

Alvar Aalto : architect biography Alvar Aalto Alvar Aalto (1898-1976) is considered a modern architect, yet his work exhibits a carefully crafted balance of intricate and complex forms, spaces, and elements, and reveals a traditionalism rooted in the cultural heritage and physical environment of Finland. Over the course of his 50-year career, Alvar Aalto, unlike a number of his contemporaries, did not rely on modernism's fondness for industrialized processes as a compositional technique, but forged an architecture influenced by a broad spectrum of concerns. Alvar Aalto 's is an architecture that manifests an understanding of the psychological needs of modern society, the particular qualities of the Finnish environment, and the historical, technical, and cultural traditions of Scandinavian architecture. Hugo Alvar Henrik Aalto was born in the Ostro-Bothnian village of Kourtane in 1898.

Architect Day: Tadao Ando He was a truck driver and boxer, he taught himself architecture as he didn't like school and preferred to study his way, visiting and analyzing the works. Tadao Ando has consolidated his name by performing an architecture that's pure, allowing the user to experience space and nature in his works. Tadao Ando was born in Osaka, Japan, on September 13, 1941 and was raised by his grandmother. At 10 to 17 years of age, he worked with a local carpenter where he learned to work with wood, building model airplanes and ships. massimiliano + doriana fuksas: tbilisi public service hall first image 'tbilisi public service hall' by massimiliano + doriana fuksas, tbilisi, georgia image © moreno maggi all images courtesy of fuksas architects after two years of planning and construction, the 'tbilisi public service hall' designed by italian architects massimiliano and doriana fuksas of fuksas architects has been recently inaugurated in tbilisi, georgia. eleven diversely-shaped petals rise 35 meters above neighboring buildings of the urban and centrally located site to overlook the kura river. beneath the overlapping canopy, seven stacked volumes contain four levels of office space. their positioning envelopes a centralized public square, offering employees upward views to the underside of the roof and tree-columns. the branching pillars are positioned inside and outside the building to majestically support the roof entity, lifting it to be entirely separate from the building beneath. internal footbridges connect each of the levels for ease of circulation. project info:

James Stirling (architect) Sir James Frazer Stirling (22 April 1926 – 25 June 1992) was a British architect. Among critics and architects alike he is generally acknowledged to be one of the most important and influential architects of the second half of the 20th century. His career began as one of a number of young architects who, from the 1950s onwards, questioned and subverted the compositional and theoretical precepts of the first Modern Movement. Stirling's development of an agitated, mannered reinterpretation of those precepts – much influenced by his friend and teacher, the important architectural theorist and urbanist Colin Rowe – introduced an eclectic spirit that allowed him to plunder the whole sweep of architectural history as a source of compositional inspiration, from ancient Rome and the Baroque, to the many manifestations of the modern period, from Frank Lloyd Wright to Alvar Aalto.