Not so much a recipe… 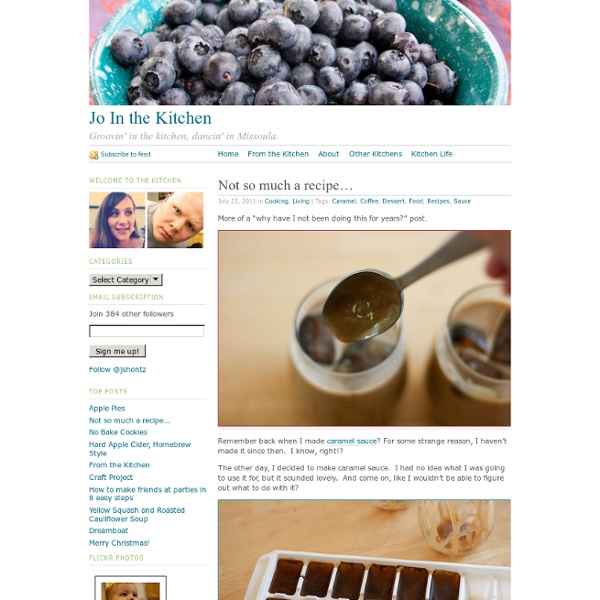 More of a “why have I not been doing this for years?” post. Remember back when I made caramel sauce? For some strange reason, I haven’t made it since then. I know, right!? The other day, I decided to make caramel sauce. I’d also been pouring the leftover coffee into an ice tray and freezing it in the off hand chance I’d have time to make iced coffee. See where I’m going? I didn’t have time to cold brew, so I made coffee in the french press, poured it into a pitcher, and let it rest in an ice bath. Once it was chilled, I took the caramel sauce and drizzled it in some glasses. Totally fancy, I know. Then I added the coffee cubes, my favorite creamer, then the coffee. Lovely. For this batch, I didn’t let the coffee cool enough, so the caramel drizzles disappeared when I poured the coffee in. So, now that I have the power of delicious iced coffee, you’ll find me out in my back yard, chillin’ with a book and sippin’ on love. Pioneer Woman’s Caramel Sauce Like this: Like Loading...

Scientists discover virus that kills all types of breast cancer ‘within seven days’ By Stephen C. WebsterFriday, September 23, 2011 16:48 EDT Scientists at the Penn State College of Medicine said this week they have discovered a virus that is capable of killing all grades of breast cancer “within seven days” of first introduction in a laboratory setting. The virus, known as adeno-associated virus type 2 (AAV2), is naturally occurring and carried by up to 80 percent of humans, but it does not cause any disease. Researchers learned of its cancer-killing properties in 2005, after Penn State scientists observed it killing cervical cancer cells. When combined in a lab recently, AAV2 eradicated all the breast cancer cells “within seven days,” according to researchers. “If we can determine which viral genes are being used, we may be able to introduce those genes into a [therapy],” explained Penn State research associate Samina Alam. The Center for Disease Control says that breast cancer is the most common type of cancer affecting American women. Copyright 2011 The Raw Story

Five Manifestos for Life by Kirstin Butler How a numbered list can start a personal revolution. Some days everyone needs a little extra encouragement. The words or lines or colors don’t want to come, or worse, we don’t even want to sit down to create. That’s when we turn to these inspiring manifestos, any one of which is guaranteed to give our uncooperative creativity a sharp kick in the pants. Here are five of our favorite contemporary manifestos that nudge ideas out of your head and into the hands of the world. We’ve long been fans of the amazing work of Frederick Terral, the creative visionary behind design studio Right Brain Terrain. You may not be a Picasso or Mozart but you don’t have to be. We can’t imagine more sound advice. Guidelines to get you from Point A to finished product, The Cult of Done Manifesto was written by tech guru Bre Pettis (of MakerBot fame) in collaboration with writer Kio Stark in 20 minutes, “because we only had 20 minutes to get it done.” This is your life. There is an enemy.

Paper Flowers – Anyone Can Do That | FindInspirations.com Japanese Kusudama, this tutorial is featured on Craftuts Anyone can do that, I assure you. The proof: I can, just take a quick look at my result below. And, believe me, I am neither meticulous nor particularly patient. Below you can see my very first attempt to create paper flowers. What you will need to make your own Kusudama paper ball? 1. 3. 4. (optionally) I prefer torn paper instead of cut. You have to start with a single petal. Now you have to glue your 5 petals into a flower. Apply the glue to only one side of each petal, except for the last one, in this case cover both sides with glue. Your first flower is done. Don’t glue every petal right after you make it. When all 12 flowers are finished you have to glue them together. When two halves of Kusudama Flower Ball are ready you have to glue them together.

25-money-saving-ideas | budget | get-started When planning a wedding good "Money Saving Ideas" are always welcome Here is our collection of 25 great Money Savers for our DIY brides world wide: 1) Have a smaller wedding with fewer guests. This will cut your total wedding costs a lot. The fewer guests - the fewer invitations - the fewer tables - the less food & drinks and so forwards. Smaller weddings are often much more enjoyable for guests attending the wedding as well as for the couple. 2) Simply and stylish invitations. 3) Avoid May - October. 4) Consider a wonderful Asti instead of champagne. 5) Less snacks and food at the reception. 6) Buy flowers in season. 7) If you have the skills and the time, you can make your own table centrepieces. 8) Avoid decorating the church with flowers. 9) Have the wedding ceremony and the wedding party at the same place.This makes it easy and less expensive on transport for you and your guests and will cut costs considerably on decorations in total. 10) Use less but bigger tables.

Jay Hoff Builds Giant Star Wars-Themed LEGO Model Jay Hoff, an American school teacher from Florida, has spent six months of his life building a large-scale LEGO model of a scene from Star Wars: Return of the Jedi. The first time Jay encountered LEGO was in 1973, when he found a biplane in a Burger King lunchbox, and he’s been fascinated with the little plastic bricks since then. He’s also a is fan of Star Wars and has collected a lot of the Star Wars LEGO kits that started coming out in the early 90s, but his personal creation is cooler than any standard kit ever launched. Hoff spent six months piecing it together from around 30,000 pieces and populating it with 388 miniature LEGO figurines. Photos from Jay Hoff’s MOC Pages profile. Reddit Stumble

30 Geeky Wedding Invites | Geek Wedding Guide | Geek Wedding Guide Comic Book Love When photographer Nicole Ladonne, met Crystal and Ryan to discuss their upcoming engagement session she immediately discovered they nerded out about comic books just as much as her. Ladonne suggested they take their photographs at the Ann Arbor comic bookstore, Vault of Midnight. She says it was one of her favorite engagement sessions ever and... Scientist turned Cake Maker Tasha Shomali of Tasha’s Tasty Treats is a scientist turned baker. DIY Geeky Pop-up cards How cute and geeky are these pop-up cards? Hello world! Welcome to WordPress. Appy Couple – App Planner In a world where apps do everything from reminding you to take the dog out, to teaching you how to tie your shoe, its only natural now there is an app to help plan and publish your wedding details. iPhone Engagement Photography Engagement photos are a great opportunity to let your personalities shine. Meteorite Wedding Ring Redditor Laporkenstein carries a piece of space around with him everyday. Lego Wedding Portrait