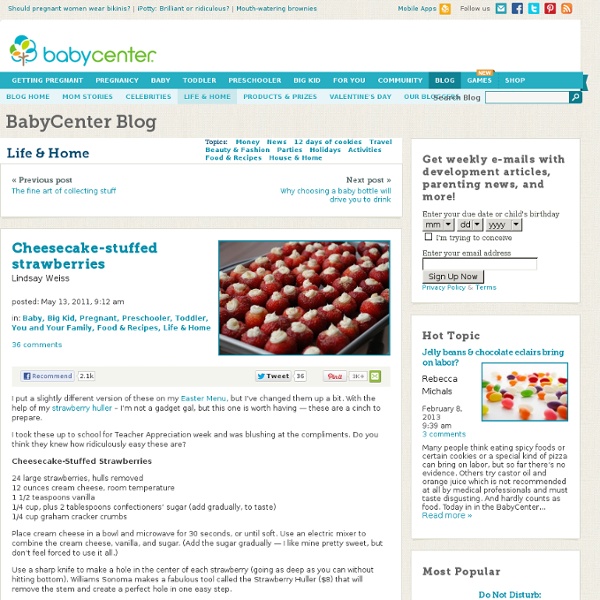 I put a slightly different version of these on my Easter Menu, but I’ve changed them up a bit. With the help of my strawberry huller – I’m not a gadget gal, but this one is worth having — these are a cinch to prepare. I took these up to school for Teacher Appreciation week and was blushing at the compliments. Do you think they knew how ridiculously easy these are? Cheesecake-Stuffed Strawberries 24 large strawberries, hulls removed 12 ounces cream cheese, room temperature 1 1/2 teaspoons vanilla 1/4 cup, plus 2 tablespoons confectioners’ sugar (add gradually, to taste) 1/4 cup graham cracker crumbs Place cream cheese in a bowl and microwave for 30 seconds, or until soft. Use a sharp knife to make a hole in the center of each strawberry (going as deep as you can without hitting bottom). Spoon or pipe the filling into each hole.

22 Ways To Get Your Vegan Snack Attack On It must be snacking season because I’ve had a lot of emails lately asking for some healthy vegan snack ideas and I thought it was a great idea for a post. Many of the recipes below are also some of the most popular snack recipes of 2011, so I will also add this post to my Top Recipes of 2011 page for easy reference. Ready to get your vegan snack attack on? Scrumptious Baked Cinnamon Breakfast Bites I love a good donut, especially a homemade one. What I don’t love is the pain associated with deep frying them. It is messy, time consuming and certainly more fattening. These baked Cinnamon Breakfast Bites mimic what I love about donut holes but without all the added stress and calories. RecipeGirl.com - StumbleUpon Updated 9/22/11 to Add: If you’re coming here to sample these delicious Cinnamon Roll Pancakes, you just might like the latest recipe that I’ve posted for Pumpkin Cinnamon Roll Pancakes too. And Gingerbread- Cinnamon Roll Pancakes too. Enjoy!

Kiwi and Jalapeño Salsa © Jerry James Stone via Flickr Just because tomatoes are no longer in season, that doesn't mean we have to give up on fresh salsa, right? No, it doesn't! This kiwifruit salsa is tangy, spicy and so yummy! Come summer, you just might be longing for fresh kiwis again. DIY: Make your own Halloween dinnerware So now you've seen my interpretation of a Raven themed dinner party, I wanted to show you how I made the dinnerware. If you are like me you probably oogle over the holiday themed dishes but quickly shy away since you don't want to shell out for a whole set just for one celebration. (I don't even have real china so I think its safe to say I won't be buying any themed kind either)

Vanilla Bean Baby Doughnuts Even though I've been a busy girl lately, I'm never too busy for a doughnut break! I especially love the mini variety. These are extra light and have a double dose of vanilla goodness. The idea for these came from the Starbucks Birthday Cake Doughnut, a very dense doughnut that is eye-catching with pink icing and tiny white nonpareils. Since my recipe turned out very light and fluffy (the exact opposite of Starbucks) I made them in my favorite shade of blue. The texture was not at all what I expected from a baked doughnut.

Stacy Stowers - StumbleUpon There’s a very good reason why it’s called the Happy Shake! Though this creamy blend tastes like a delicious dessert, it’s chock-full of spinach, berries and super happy foods, like raw chocolate and maca. The Happy Shake is a meal replacement. It’s a key place to start when trying to lose excess weight, increase energy levels, and get healthier and happier. Easy homemade mint recipe - Raleigh Food Homemade mints are simple to make and they never last long at a reception or dinner party. Mints are also a popular choice for finger foods during the holidays. This simple homemade recipe for butter mints will become a fan favorite in your circle of friends and family. Simple Homemade mint recipe Ingredients

Sandpaper Printed T-shirt Kids Craft This is a super simple sandpaper printing technique that will keep your kids busy and make one cute shirt! The best part about this fun little craft is that the supplies were bought at the Dollar Store, even the T-shirt! We used crayons we already had so we only spent $2.00 on our new T-shirt. Supplies for Sandpaper Prints good quality crayons, a t-shirt, iron and fine sandpaper.

Honeyed Pears in Puff Pastry Poaching fruit is one of my favorite things to do when cold weather arrives. It's so warming to stand over a boiling pot of fragrant spices and lose yourself in thought. When I made these, I couldn't help but daydream as I stirred; if I were a pear... I wouldn't want to spend my days on the shelf of a cold produce department. I'd want to be taken to a warm home and placed in a jacuzzi of honey and spices. Homemade Protein Bars &#171; askGeorgie.com - StumbleUpon There are plenty of reasons to make your own protein bars. First, it’s economical ! You’ll save a lot of money, particularly if you have a habit of buying single bars one a time. Even better, you can customize your bars to your taste preferences, avoid any allergens, and leave out ingredients you don’t want. You can make a bar with high quality protein, whole grains, real nuts or fruit, flaxseeds, whichever sweetener you prefer, and skip all the long-named chemical ingredients (preservatives and fortifications) that you may not need or want in your snack. Plus, they taste awesome if you have a good recipe!

Pepperoni Pizza Monkey Bread How do you make bread even better? You stuff it with pepperoni and cheese. Then, you bake it in a bundt pan that allows you to pull off little chunks and dip them in pizza sauce. This is the perfect thing to bring to a party (and I did, where it disappeared quickly!) or to eat during a football game.

Glass Etching Have you ever done any glass etching? Well, neither had I before today. But wow. Such an easy, yet sweet little touch that you can add to any glass. Check out my new and improved etched Trifle Bowl.