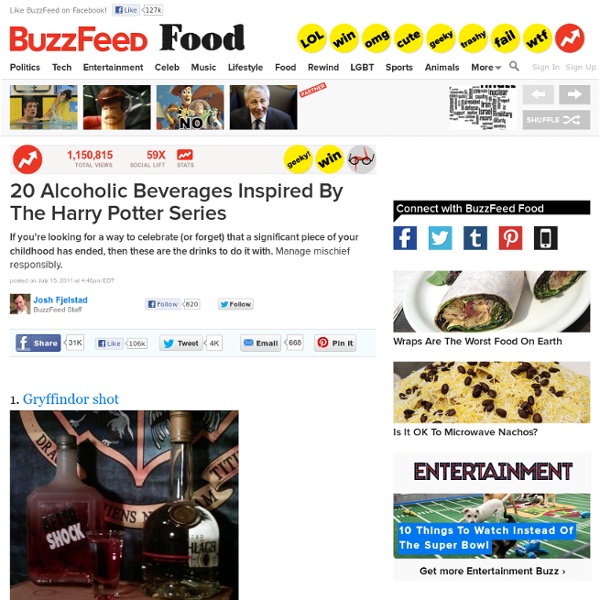 The essential Harry Potter cooking guide - Page 2 Cook A Wizard-Worthy Feast Every Harry Potter movie has at least one scene in the Great Hall over breakfast, lunch or dinner. Perhaps you haven’t been envious of their Cornish or pumpkin pasties, Christmas pudding, treacle tarts and pumpkin juice, but you might be after trying these wizard-inspired recipes. Endless Poptails: Cherry Apple Whiskey Sour We ESers like our whiskey combinations and we’re betting you will too. Never mindful of the rules, this week we created a blasphemous bartending nightmare by skipping the shaker for some rotating blades. Yep, everything is headed for the blender including the whiskey. 40 Witty Campaign Posters for a Cause Non-profit organizations use posters to deliver a particular message. These help inform people about current issues, problems and even the possible consequences of their actions. With a sentence that contains strong words or images, these posters give more impact than common commercial posters.

Sulfites in Wine: The Myths, the Facts, and the Truth “Contains Sulfites.” Just two little words — yet so frequently misunderstood! Words you see on almost every bottle of wine. Harry Potter - Chapter by Chapter & The Harry Potter Companion - StumbleUpon The following books are still to come; check our updates page for the scoop on what’s happening now! The Tales of Beedle the Bard Like this: Like Loading... Madam Rosmerta's Magical Recipes Dinah Bucholz and Keith Hawk September 27, 2010 Philadelphia, PA USA Keith Hawk, MuggleNet (KH): I’m sitting with Dinah Bucholz of Philadelphia and she has just released her new book titled ‘The Unofficial Harry Potter Cookbook’. First Dinah, I’d like to welcome you tonight, and thank you for joining us here on MuggleNet, and congratulations on your book. Dinah Bucholz (DB): Well thank you very much, I’m delighted to be here. KH: Tell us when was the idea first originated and how did it evolve since that first origination?

Adult Desserts: Strawberry-Watermelon Popsicles & Champagne : Zomppa – International Food Magazine Remember popsicles? When was the last time you had a popsicle? One of those sticky, succulent, sweet and refreshing icons most generally associated with summertime heat and good times? My sister and I had a popsicle at least once a day during the summer. With the cacophonous sounds of crickets chirping in our backyard and the hazy orange-red sun settling into the horizon, my sister and I would steadily slurp on our sticky-sweet treats, hoping we could catch the popsicle drips before they oozed all over our chins and palms. Sigh. One Block Off the Grid: The Smart New Way to Go Solar posted by Dave Llorens on September 8th, 2010 It Sounds Crazy, But It’s True Here at One Block Off the Grid, we’re constantly striving to demonstrate not only how much money solar can save, but also make for households, so we decided to conduct a little experiment: let’s say you, the homeowner, had $20,000 to invest today. What would happen if you decided to put panels on your roof instead of putting it in the bank?

Ten Winter Ales Ranked Winter may still be more than a month away, but try telling that to your local craft-beer store (unless you don’t have a local craft-beer store, in which case you have my deepest sympathy). As squirrels pack their nests with chestnuts and acorns, November is a month for stocking up on old ales, strong lagers and winter warmers for those cold days ahead. We picked 10 beers of various styles that claim to be made for winter (but not Christmas beers, an entirely different style which we’ll be ranking this weekend). Eight Paste staff and interns voted on the selections with the help of beer expert Eric Johnson of Athens’ Trappeze pub and Wild Heaven Craft Beers rattling off insight via speakerphone. Here, we count them down for you. (If your favorite winter beer is missing, let us know about them in the comments section below.)

Harry James Potter & The Harry Potter Companion - StumbleUpon born July 31, 1980 to James & Lily Potter Gryffindor 1991-1997 defeated Voldemort October 31, 1981 & May 2, 1998 Triwizard Champion; founder of Dumbledore’s Army; member of Slug Club and Gryffindor Quidditch Team (Seeker) married to Ginny Weasley; children James, Albus, & Lily Head of Auror Dept under Minister Kingsley Shacklebolt Harry Potter was a highly unusual boy in many ways…. (PA1) When he had been younger, Harry had dreamed and dreamed of some unknown relation coming to take him away. (PS2) Cauldron Cakes This is part II of my mini-series on Harry Potter snacks from the books brought to life (part I is on Honeydukes treats, part III features every wizard's favorite drink—butterbeer!— and part IV showcases decadent butterbeer cupcakes). When I was young, I wanted to grow up to be a writer.

Euclideon promises unlimited graphical detail Are Euclideon's promises the future of graphics or vapourware? Small Australian tech company Euclideon has released a new demo trailer for its graphics technology Unlimited Detail, which promises to ditch the dependency on polygons in games in favour of millions of cloud point technology. This should create richer game worlds that look more realistic, says Euclideon. The problem with polygons (as the video below brilliantly highlights) is that they’re computationally expensive and don’t give a realistic look when you look closely. ‘There is a better way to do graphics, which is used in medicine and the sciences, and that is to make everything out of tiny little atoms instead of flat panels [polygons].

Deadly Leopard Seal Tries to Feed Live Penguins to Photographer (Video) "Bloody Hell! That's the biggest leopard seal I've ever seen!" Leopard seals are pretty scary predators, especially if you're a penguin. The Serious Eats Guide to Bourbon After wading in barrels of the Scotch and Irish drams, it's time to turn our attention homeward, to that quintessential American spirit: good old bourbon whiskey. We'll look today at what makes bourbon unique, how it's made, and how it came to be. What Is Bourbon? In brief, bourbon is a whiskey, made predominantly from corn and aged in charred oak barrels. But if you've been reading this column for a while, you know that I'll probably hit you with a formal, legal definition of bourbon that complicates things. Indeed, here it is.