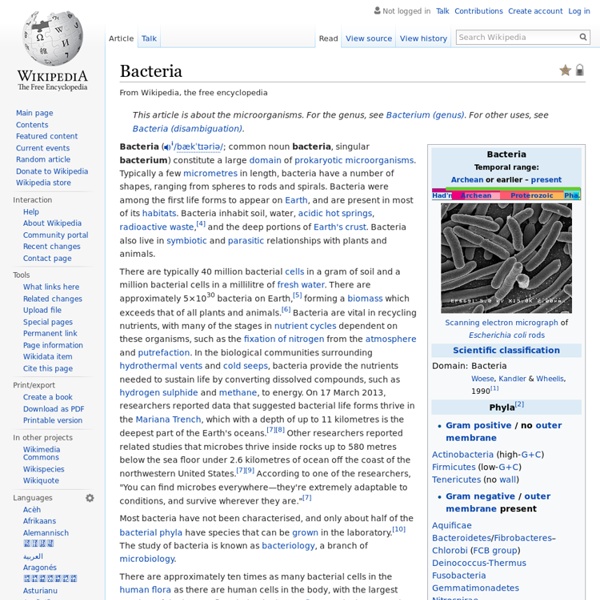 Bacteria ( Most bacteria have not been characterised, and only about half of the bacterial phyla have species that can be grown in the laboratory.[10] The study of bacteria is known as bacteriology, a branch of microbiology. Etymology Origin and early evolution Morphology Many bacterial species exist simply as single cells, others associate in characteristic patterns: Neisseria form diploids (pairs), Streptococcus form chains, and Staphylococcus group together in "bunch of grapes" clusters. Even more complex morphological changes are sometimes possible. Cellular structure Structure and contents of a typical gram-positive bacterial cell (seen by the fact that only one cell membrane is present). Intracellular structures The bacterial cell is surrounded by a cell membrane (also known as a lipid, cytoplasmic or plasma membrane). Many important biochemical reactions, such as energy generation, use concentration gradients across membranes. Extracellular structures Endospores Growth and reproduction

Archaea The Archaea ( Archaea were initially classified as bacteria, receiving the name archaebacteria (or Kingdom Monera), but this classification is outdated.[1] Archaeal cells have unique properties separating them from the other two domains of life: Bacteria and Eukaryota. The Archaea are further divided into four recognized phyla. Classification is difficult, because the majority have not been studied in the laboratory and have only been detected by analysis of their nucleic acids in samples from their environment. Classification[edit] New domain[edit] Current classification[edit] The classification of archaea, and of prokaryotes in general, is a rapidly moving and contentious field. A superphylum - TACK - has been proposed that includes the Aigarchaeota, Crenarchaeota, Korarchaeota and Thaumarchaeota.[18] This superphylum may be related to the origin of eukaryotes. Species[edit] The classification of archaea into species is also controversial. Origin and evolution[edit] R.S. Morphology[edit]