Scientists Develop A Strain Of Genetically Modified Rice That Neutralizes HIV. An international team of researchers has come up with an innovative solution to the HIV pandemic – genetically modified rice. 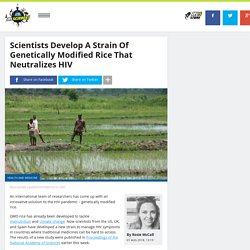 GMO rice has already been developed to tackle malnutrition and climate change. Now scientists from the US, UK, and Spain have developed a new strain to manage HIV symptoms in countries where traditional medicines can be hard to access. The results of a new study were published in Proceedings of the National Academy of Sciences earlier this week. According to the World Health Organization (WHO), there were 36,900,000 people living with HIV in 2017, 25,700,000 of whom were in Africa. And while the spread of the immunocompromising virus has stalled since the epidemic of the 1980s, there were still 2.1 million people newly infected with HIV in 2015. Une thérapie génique approuvée aux États-Unis pour la première fois. Theconversation. How Scientists Trained a Virus to Kill Only Cancer Cells Trending. You’ve heard of virus causing cancer. 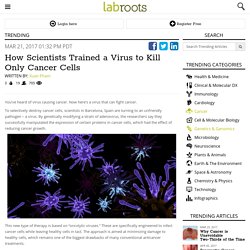 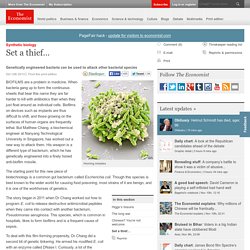 When bacteria gang up to form the continuous sheets that bear this name they are far harder to kill with antibiotics than when they just float around as individual cells. Biofilms on devices such as implants are thus difficult to shift, and those growing on the surfaces of human organs are frequently lethal. But Matthew Chang, a biochemical engineer at Nanyang Technological University in Singapore, has worked out a new way to attack them. His weapon is a different type of bacterium, which he has genetically engineered into a finely honed anti-biofilm missile. Genetically Engineered Bacteria Could Help Tackle Obesity. People may dislike the idea, but genetically modified bacteria are an incredibly useful scientific tool. 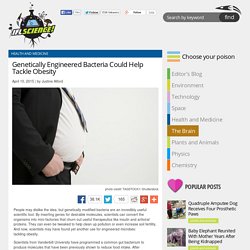 By inserting genes for desirable molecules, scientists can convert the organisms into mini-factories that churn out useful therapeutics like insulin and antiviral proteins. They can even be tweaked to help clean up pollution or even increase soil fertility. And now, scientists may have found yet another use for engineered microbes: tackling obesity. Engineered Viruses Could Fight Antibiotic-Resistant Bacteria. In the war against antibiotic resistance, which threatens to send medicine spiraling back into the dark ages, scientists are racing to try and find desperately needed replacements before an extra 10 million people worldwide are killed each year due to the problem. 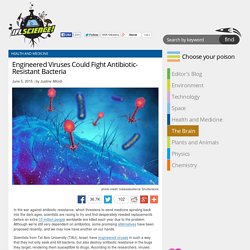 Although we’re still very dependent on antibiotics, some promising alternatives have been proposed recently, and we may now have another on our hands. Scientists from Tel Aviv University (TAU), Israel, have engineered viruses in such a way that they not only seek and kill bacteria, but also destroy antibiotic resistance in the bugs they target, rendering them susceptible to drugs. According to the researchers, viruses designed using this novel strategy could have a place in hand sanitizers or cleaning fluids to prevent the spread of drug-resistant microbes in hospitals and other clinical settings, which are hotspots for these life-threatening pathogens. The second phage, called a “temperate” phage, was a little more special. Modified HIV Cures Rare Genetic Disorder In Children. HIV may still be on a global rampage, but at least scientists are attempting to make good out of a bad situation. 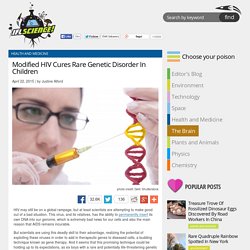 This virus, and its relatives, has the ability to permanently insert its own DNA into our genome, which is extremely bad news for our cells and also the main reason that AIDS remains incurable. But scientists are using this deadly skill to their advantage, realizing the potential of exploiting these viruses in order to add in therapeutic genes to diseased cells, a budding technique known as gene therapy. And it seems that this promising technique could be holding up to its expectations, as six boys with a rare and potentially life-threatening genetic disease have just been cured with its help. Wiskott-Aldrich syndrome affects between 1 and 10 million babies born worldwide and is almost exclusively found in males.

Bone marrow from seven children enrolled into a clinical trial was then removed before being purified to isolate the desirable immune cells. News Highlights:CRISPR-Edited Human Embryos Raise Ruckus. Blurring an ethical line, scientists at Sun Yat-sen University in Guangzhou have used the CRISPR/Cas9 gene-editing system not on human adult cells or animal embryos, as has been done on many occasions, but on human embryos. 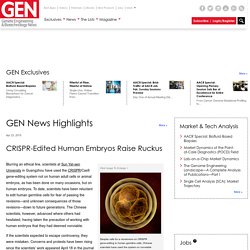 To date, scientists have been reluctant to edit human germline cells for fear of passing the revisions—and unknown consequences of those revisions—down to future generations. The Chinese scientists, however, advanced where others had hesitated, having taken the precaution of working with human embryos that they had deemed nonviable. If the scientists expected to escape controversy, they were mistaken. Concerns and protests have been rising since the scientists’ work appeared April 18 in the journal Protein & Cell. Dr. Genetically Engineered Bacteria Could Help Tackle Obesity. “Organs-on-a-Chip” Aim to Eliminate Animal Testing from Drug Research. “Organs-on-a-Chip” Aim to Eliminate Animal Testing from Drug Research Imagine a future when promising drugs won't take a decade to develop, when early success more often translates to later adoption, and when we no longer need to rely on animal testing. 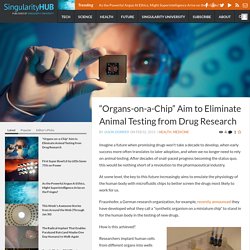 After decades of snail-paced progress becoming the status quo, this would be nothing short of a revolution to the pharmaceutical industry. At some level, the key to this future increasingly aims to emulate the physiology of the human body with microfluidic chips to better screen the drugs most likely to work for us. Improved Anti-HIV Antibodies Created Through Genetic Engineering. Many viruses have hundreds of protein ‘spikes’ on their surface that Y-shaped antibodies are able to grab with both ‘arms’ in order to attack it. 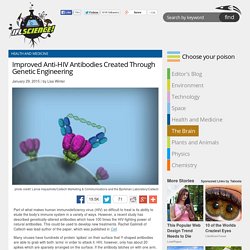 HIV, however, only has about 20 spikes which are sparsely arranged on the surface. If the antibody latches on with one arm, it has a difficult time finding another one within reach. Not only is the antibody unable to function properly and attack the virus without a firm grasp, but the decreased efficacy also makes it easier for the virus to evolve and negate the antibody’s efforts entirely. These factors might be contributing to HIV’s virulence. Galimidi’s team circumvented this obstacle by genetically engineering antibodies that allow both arms to latch onto a single spike.

Genetically Modified Bacteria Could Prevent Obesity. Despite what Dr. 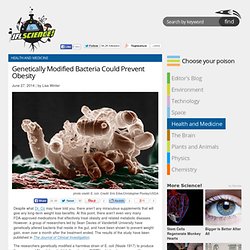 Oz may have told you, there aren’t any miraculous supplements that will give any long-term weight loss benefits. At this point, there aren’t even very many FDA-approved medications that effectively treat obesity and related metabolic diseases. However, a group of researchers led by Sean Davies of Vanderbilt University have genetically altered bacteria that reside in the gut, and have been shown to prevent weight gain, even over a month after the treatment ended. The results of the study have been published in The Journal of Clinical Investigation. Experimental Ebola Treatment Produced In Genetically Modified Plants.