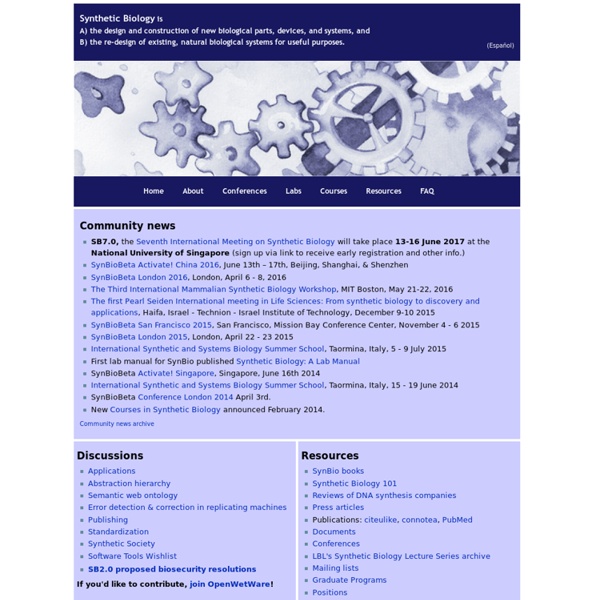 Synthetic biology Synthetic biology is the design and construction of biological devices and systems for useful purposes.[1] It is an area of biological research and technology that combines biology and engineering, thus often overlapping with bioengineering and biomedical engineering. It encompasses a variety of different approaches, methodologies, and disciplines with a focus on engineering biology and biotechnology.[2] The advance of synthetic biology relies on several key enabling technologies provided at ever increasing speed and lower cost. DNA sequencing, fabrication of genes, modeling how synthetic genes behave, and precisely measuring gene behavior are essential tools in synthetic biology. Geneticists have found a number of gene sequences which correspond to differing traits in organisms; these individual gene sequences have been developed and incorporated into DNA similar to genetic "lego" blocks. History[edit] Let me now comment on the question "what next". Perspectives[edit] Biology[edit]

Edge Master Class 2009 THE CURRENT CATALOG OF LIFE By Ed Regis In their futuristic workshops, the masters of the Synthetic Genomics, Craig Venter and George Church, play out their visions of bacteria reprogrammed to turn coal into methane gas and other microbes programmed to create jet fuel 14. Synthetic genomics, the subject of the conference, is the process of replacing all or part of an organism's natural DNA with synthetic DNA designed by humans. The specter of "biohackers" creating new infectious agents made its obligatory appearance, but synthetic genomic researchers are, almost of necessity, optimists. Church and his Harvard lab team have already programmed bacteria to perform each of these functions separately, but they have not yet connected them all together into a complete and organized system. But tumor-killing microbes were only a small portion of the myriad wonders described by Church. Church is also founder and head of the Personal Genome Project, or PGP. [ Permalink ]

Getting Ready for Synthetic Biology Since the completion of the Human Genome Project in 2003, scientists have expanded their knowledge of how living cells work with new approaches including genomics, proteomics, and systems biology. Yet it is another development--the ability not only to understand but also to synthesize genes at a speed and cost unthinkable just a few years ago--that has spurred, arguably, the greatest paradigm shift in recent biology: Today, many scientists are not content merely to analyze and understand life. They want to create it. Synthetic biology, the synthesis of biological components and devices and the redesign or creation of new life forms, has enormous potential. John Glass, a senior microbiologist in the synthetic biology group at the J. Today, synthetic biology is still in its infancy. A Multidisciplinary Approach to Life Brooke Dill, JCVI John Glass At least as important as the field you come from is a willingness to meet other disciplines halfway. A Field in Synthesis Courtesy, Andrés Moya

Synthetic biology could be big boost to interplanetary space travel Genetically engineered microbes could help make manned missions to Mars, the moon and other planets more practical, according to a new analysis by UC Berkeley and NASA scientists. In the cover story of today’s issue of the Journal of the Royal Society Interface, four bioengineers describe how synthetic biology – what some have termed “genetic engineering on steroids” – could allow space travelers to use microbes to produce their own fuel, food, medicines and building materials from raw feedstocks readily available on Mars or the moon, instead of carrying all supplies aboard the spacecraft or making them at the destination with conventional non-biological methods. “Our analysis indicates that (synthetic biology) has a good chance of being a disruptive space technology by providing substantial savings over current techniques,” said first author Amor Menezes, a postdoctoral scholar in UC Berkeley’s California Institute for Quantitative Biosciences (QB3). Supplies for a 916-day mission

DIYbio/FAQ From OpenWetWare DIYbio FAQ v1.5: "The biohacker's FAQ" This FAQ for DIYbio is actively maintained by it's editors, and by you! Edit your contributions directly or email updates to the DIYbio email list, diybio@googlegroups.com. Major contributors (in alphabetical order): The contents of this FAQ are copyright under the OpenWetWare Copyright policy (Creative Commons Attribution-ShareAlike 3.0 Unported). This Frequently Asked Questions document is for the DIYBio mailing list. 1.0 - copied on 4/7/2009 from heybryan.org...DIYbio_FAQ 1.1 - some updates to clarify original version 1.2 - new sections, reorg, + sections about DIY agar DOI:10.1007/BF00152620 --jcline@ieee.org 1.3 - expand projects sections. DIYbio is an organization that aims to help make biology a worthwhile pursuit for citizen scientists, amateur biologists, and DIY biological engineers who value openness and safety. What is DIYbio's mission? -- Len Sassaman, DIYbio google group Schmidt M, 2008. IRGC 2008. Other Papers:

The 15th International Conference on Systems Biology 2014 Controlling genes with your thoughts Thoughts control protein quantity The implant was initially tested in cell cultures and mice, and controlled by the thoughts of various test subjects. The researchers used SEAP for the tests, an easy-to-detect human model protein which diffuses from the culture chamber of the implant into the mouse’s bloodstream. To regulate the quantity of released protein, the test subjects were categorised according to three states of mind: bio-feedback, meditation and concentration. Test subjects who played Minecraft on the computer, i.e. who were concentrating, induced average SEAP values in the bloodstream of the mice. When completely relaxed (meditation), the researchers recorded very high SEAP values in the test animals. New light-sensitive gene construct “Controlling genes in this way is completely new and is unique in its simplicity,” explains Fussenegger. The system functions efficiently and effectively in the human-cell culture and human-mouse system.