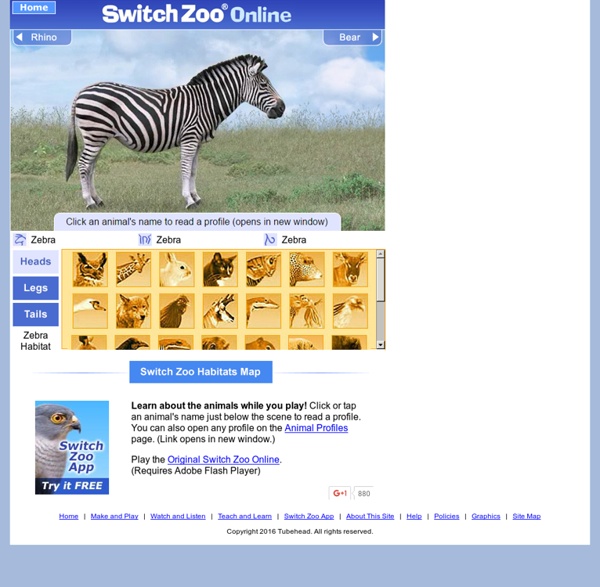 A complete profile of every animal in Switch Zoo is available here. (Link opens in a new window.) Join the Guided Tour to learn how to make new animals. Go on the Creative Writing Field Trip to write stories about them.

Curiosity Cabinet Over the past 25 years I have accumulated a collection of various gizmos, devices, toys etc. which to me are excellent examples of scientific principles or things that you look at and you say "That's impossible!" except it's staring you in the face. In the hope that others may also find them interesting and with the help of two undergraduates, Jacy Lundberg and Omar Khan, we have created videos of many of the items in the collection. In many cases we have tried to include explanations of how they work or references to where one can find this information. Jacy and Omar are currently seniors in the Boston College pre-medical program.

Mission adaptation Or why some of them are really good at hiding or running fast? It didn't happen by accident, it is all to do with adapting or changing to fit into your environment better. If an animal is born with something useful to fit their environment, for example they can run really fast, they will probably stay alive for a lot longer. If they stay alive longer there is more chance they will reproduce (have babies). Moonbase Alpha on Steam About This Game NASA has once again landed on the lunar surface with the goal of colonization, research, and further exploration. Shortly after the return to the Moon, NASA has established a small outpost on the south pole of the moon called Moonbase Alpha. Utilizing solar energy and regolith processing, the moonbase has become self-sufficient and plans for further expansion are underway. In Moonbase Alpha, you assume the exciting role of an astronaut working to further human expansion and research.

Animal Adaptations Purpose To expand students’ knowledge of animal features and behaviors that can help or hinder their survival in a particular habitat. Context As students approach this Animal Adaptations lesson, bear in mind that, according to research, most lower elementary school students are still forming a basic understanding of how animals survive in their respective environments. For example, many students understand a simple food link between two animals, but many still assume that animals are still independent of each other and depend on humans to provide food and shelter. Magnifying the Universe Embed this infographic on your site! <iframe width="500" height="323" scrolling="no" src=" frameborder="0" allowfullscreen></iframe><br />Copyright 2012. <a href=" the Universe</a> by <a href=" Sleuth</a>. The above is an interactive infographic.

Science Education - Research & Training - NIH NIH Home > Research & Training Resources for Students Featured Site: NIAMS Kids Pages Your childhood and teen years are a prime time to learn habits that will help you keep your bones, joints, muscles, and skin healthy for years to come. Resources for Educators Deep Time : A History of the Earth - Interactive Infographic Life on the planet started astonishingly early. The first living organisms, in the current model of evolution, are thought to be Prokaryotes1. The oldest known fossilised prokaryotes have been dated to approximately 3.5 billion years ago, only 1 billion years after the formation of the Earth's crust. Eukaryotes2 are more advanced organisms with complex cell structures, each of which contains a nucleus. Although incredibly hard to determine their origin, they are thought to have developed 1.6–2.1 billion years ago, although some research2 suggests eukaryotes being present even earlier than this. Around 1.1 billion years ago multicellular3 organisms are thought to have started to develop, most likely similar in form to plants such as green algae. 200 million years later true multicellularity had also evolved in animals similar in nature to today's sponges, which are organisms which can reassemble themselves.

3D Models of the Human Anatomy Different organs can work together to perform a common function, like how the parts of your digestive system break down food. We refer to an integrated unit as an organ system. Groups of organ systems work together to make complete, functional organisms, like us! There are 11 major organ systems in the human body. The circulatory system is a body-wide network of blood, blood vessels, and lymph.