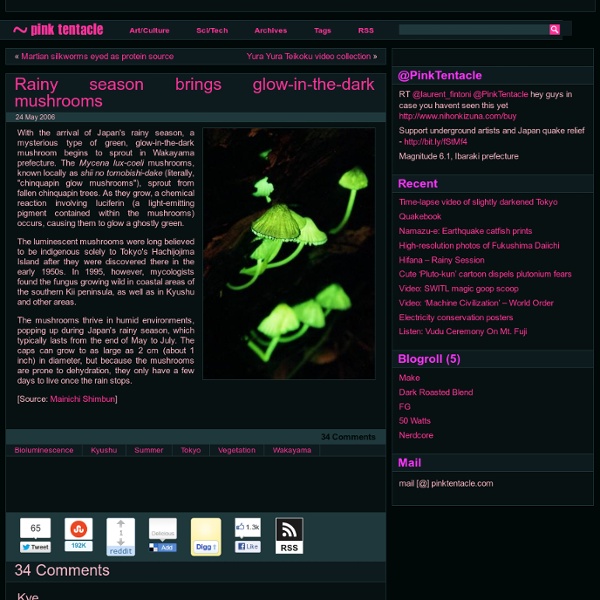 24 May 2006 With the arrival of Japan's rainy season, a mysterious type of green, glow-in-the-dark mushroom begins to sprout in Wakayama prefecture. The Mycena lux-coeli mushrooms, known locally as shii no tomobishi-dake (literally, "chinquapin glow mushrooms"), sprout from fallen chinquapin trees. As they grow, a chemical reaction involving luciferin (a light-emitting pigment contained within the mushrooms) occurs, causing them to glow a ghostly green. The luminescent mushrooms were long believed to be indigenous solely to Tokyo's Hachijojima Island after they were discovered there in the early 1950s. The mushrooms thrive in humid environments, popping up during Japan's rainy season, which typically lasts from the end of May to July. [Source: Mainichi Shimbun]

Mycologists So-Called Life Box - Environment - GOOD The resourceful mycologist (that's a fungi-studier) Paul Stamets has made cardboard packaging that can be planted and will grow into trees. It's called the Life Box. The Life Box suite of products builds upon the synergy of fungi and plants by infusing spores and seeds together inside of packaging materials that can be planted. The Tree Life Box is made of recycled paper fiber. Here's a video of Stamets (wearing a hat that makes him look a little like a mushroom himself) explaining how the Life Box works on local San Francisco news. If you run a company that could use these instead of normal cardboard, I will happily post about how responsible you are if you pledge to switch to these things. Via Core77

Northern Lights: Breathtaking images of the aurora borealis over the Arctic circle By Daily Mail Reporter Updated: 19:28 GMT, 1 February 2012 They are one of Earth's most stunning natural spectacles. Few people are lucky enough to see the Northern Lights which paint a breathtaking colour backdrop across the wilderness of the Arctic circle. The nightime display could be seen across Scotland, Canada, Norway and even the north-east of England last week after the biggest solar storm in more than six years bombarded the earth with radiation. One flyer caught the natural phenonmenon, called aurora borealis, as it lit up the wings of a transatlantic Air Canda flight. The wings glowed red as green lit up the horizon. Scroll down for video Spectacular: An aeroplane's wing is lit up by the Northern Lights. Natural beauty: These rare green and blue northern lights were photographed over the city of Grundarfjorour in Iceland Eerie: A green aurora appears over Svalbard in Norway, an area close to the north pole which is shrouded in darkness for much of the year

Lifestyle - StumbleUpon We will never tire of the positive effects of nature. Its calming, soothing and inspiring influence will never go out of style. The more we rush, the more time we spend indoors staring at our screens and devices, the more urban our lifestyles become, the more we crave and need time away from it all. It has been amazing to follow the newest solutions to the old dilemmas: How to bring more green space to cities; how to reclaim underused urban land for recreational and other "green" uses; how to provide more and more people the opportunity to enjoy the benefits of spending time in nature. Lately, we have seen fantastic examples of how designers and architects, urban planners and citizens' organizations have accomplished both large and small-scale projects, from bringing a bit of greenery, and open space to otherwise bleak surroundings, to large-scale neighborhood-changing undertakings. Getting back to nature is not a new phenomenon.