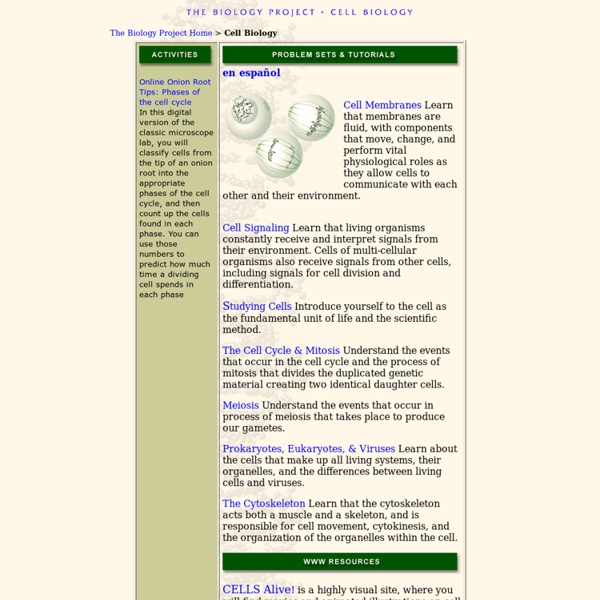 en español Cell Membranes Learn that membranes are fluid, with components that move, change, and perform vital physiological roles as they allow cells to communicate with each other and their environment. Cell Signaling Learn that living organisms constantly receive and interpret signals from their environment. Cells of multi-cellular organisms also receive signals from other cells, including signals for cell division and differentiation. Studying Cells Introduce yourself to the cell as the fundamental unit of life and the scientific method. The Cell Cycle & Mitosis Understand the events that occur in the cell cycle and the process of mitosis that divides the duplicated genetic material creating two identical daughter cells. Meiosis Understand the events that occur in process of meiosis that takes place to produce our gametes. Prokaryotes, Eukaryotes, & Viruses Learn about the cells that make up all living systems, their organelles, and the differences between living cells and viruses. Related:  Biology

PCR Virtual Lab Primers are short pieces of DNA that are made in a laboratory. Since they're custom built, primers can have any sequence of nucleotides you'd like. In a PCR experiment, two primers are designed to match to the segment of DNA you want to copy. Through complementary base pairing, one primer attaches to the top strand at one end of your segment of interest, and the other primer attaches to the bottom strand at the other end. In most cases, 2 primers that are 20 or so nucleotides long will target just one place in the entire genome. Primers are also necessary because DNA polymerase can't attach at just any old place and start copying away. DNA Polymerase is a naturally occurring complex of proteins whose function is to copy a cell's DNA before it divides in two. The DNA polymerase in our bodies breaks down at temperatures well below 95 °C (203 °F), the temperature necessary to separate two complementary strands of DNA in a test tube.

Fighting infection with vaccines - Science (9) - ABC Splash - Overview Explore historical and modern efforts to battle human infectious diseases. Watch re-enactments of the experiments of Edward Jenner, who pioneered vaccination, and of Louis Pasteur's work showing how microbes cause infection. Peer down the microscope to see the microbial world that wreaks havoc on human health. Learn about the work of an Australian team developing a vaccine against the diarrhoea. 13 mins 46 secs Source: Pathways to Australian Science | Learning area: Science | Secondary: Year 9 Transcript 00:00:07:03NARRATOR:Sickness... ...Read more > 00:11:16:20DR RUTH BISHOP:We went looking for the cause of acute gastroenteritis in young children coming into hospital. About this resource Acknowledgements Source: Pathways to Australian Science Date first broadcast: 01 January 1998 Cite this resource You can use this information to reference this item. Bibliographic details for 'Fighting infection with vaccines': Pathways to Australian Science, ' Fighting infection with vaccines', ABC Splash

New Self-Cloning Lizard Found in Vietnam Restaurant {*style:<b>You could call it the surprise du jour: A popular food on Vietnamese menus has turned out to be a lizard previously unknown to science, scientists say. </b>*} What's more, the newfound is no run-of-the-mill reptile —the all-female species reproduces via cloning, without the need for male lizards. Single-gender lizards aren't that much of an oddity: About one percent of lizards can reproduce by parthenogenesis, meaning the females spontaneously ovulate and clone themselves to produce offspring with the same genetic blueprint. (Related: "Virgin Birth Expected at Christmas—By Komodo Dragon." ) "The Vietnamese have been eating these for time on end," said herpetologist L. "In this part of the Mekong Delta [in southeastern Vietnam], restaurants have been serving this undescribed species, and we just stumbled across it." (See "New Snub-Nosed Monkey Discovered, Eaten." ) The father-son team suspected that they may be looking at an all-female species.

All Non-Africans Part Neanderthal, Genetics Confirm If your heritage is non-African, you are part Neanderthal, according to a new study in the July issue of Molecular Biology and Evolution. Discovery News has been reporting on human/Neanderthal interbreeding for some time now, so this latest research confirms earlier findings. Damian Labuda of the University of Montreal's Department of Pediatrics and the CHU Sainte-Justine Research Center conducted the study with his colleagues. They determined some of the human X chromosome originates from Neanderthals, but only in people of non-African heritage. "This confirms recent findings suggesting that the two populations interbred," Labuda was quoted as saying in a press release. His team believes most, if not all, of the interbreeding took place in the Middle East, while modern humans were migrating out of Africa and spreading to other regions. The ancestors of Neanderthals left Africa about 400,000 to 800,000 years ago. Fast forward to 2010, when the Neanderthal genome was sequenced.

How plants work - Science (4) - ABC Splash - Overview Plants are the only living things that can make their own food. They do this during the day while it's light, using a process called photosynthesis, which uses carbon dioxide and produces oxygen. 5 mins 11 secs Source: Kids in the Garden | Learning area: Science | Primary: Year 4 Transcript 00:00:19:06NICK HARDCASTLE:Mmm! ...Read more > 00:00:36:08VOICE:Yummy! About this resource Acknowledgements Source: Kids in the Garden Date first broadcast: 27 June 2005 Cite this resource You can use this information to reference this item. Bibliographic details for 'How plants work': Kids in the Garden, ' How plants work', ABC Splash abcspla.sh/m/104100 25 April 2014 Copyright information Metadata © Australian Broadcasting Corporation and Education Services Australia Ltd 2012 (except where otherwise indicated).

How Water Shapes DNA Water molecules surround the genetic material DNA in a very specific way. Scientists at the Helmholtz-Zentrum Dresden-Rossendorf (HZDR) have discovered that, on the one hand, the texture of this hydration shell depends on the water content and, on the other hand, actually influences the structure of the genetic substance itself. These findings are not only important in understanding the biological function of DNA; they could also be used for the construction of new DNA-based materials. The DNA's double helix never occurs in isolation; instead, its entire surface is always covered by water molecules which attach themselves with the help of hydrogen bonds. "We've been able to verify that some of the water is bound stronger whereas other molecules are less so," notes Dr. Analyses of the genetic material were conducted at the HZDR by the doctoral candidate Hassan Khesbak. Oscillations of the water bonds in the hydration shell of the double helix can be excited by infrared light.

DAVID: Gene Functional Classification What does this tool do? Quickly translate given gene IDs to corresponding gene names in a batch way Provide links for each genes to DAVID Gene Report for in-depth information Search functionally related genes within user's input gene list or genome Key Concepts of "Search Related Genes" Any given gene is associating with a set of annotation terms. Find Related Genes Tool is very different and complementary to the common gene clustering methods, such as homologous genes based on sequence similarity; protein families based on one common biological activity. Zygote | 3D Human Anatomy for Animation, Illustration, CAD and Software Development