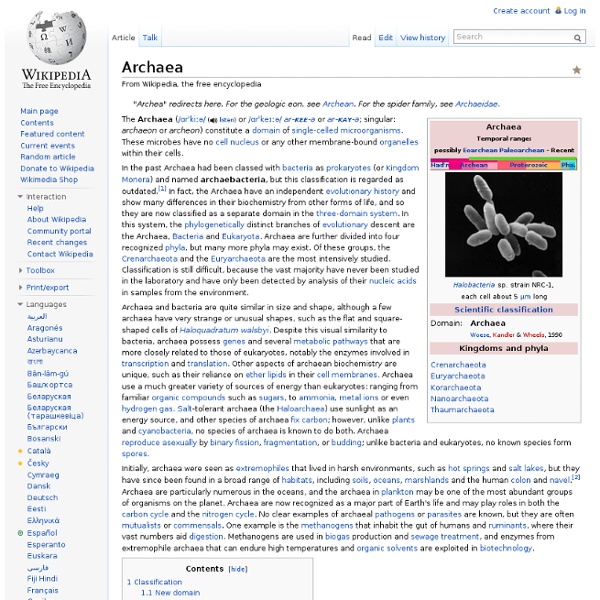 The Archaea ( Archaea were initially classified as bacteria, receiving the name archaebacteria (or Kingdom Monera), but this classification is outdated.[1] Archaeal cells have unique properties separating them from the other two domains of life: Bacteria and Eukaryota. The Archaea are further divided into four recognized phyla. Classification is difficult, because the majority have not been studied in the laboratory and have only been detected by analysis of their nucleic acids in samples from their environment. Classification[edit] New domain[edit] Current classification[edit] The classification of archaea, and of prokaryotes in general, is a rapidly moving and contentious field. A superphylum - TACK - has been proposed that includes the Aigarchaeota, Crenarchaeota, Korarchaeota and Thaumarchaeota.[18] This superphylum may be related to the origin of eukaryotes. Species[edit] The classification of archaea into species is also controversial. Origin and evolution[edit] R.S. Morphology[edit]

An Emphatic Umph Philosophicalmatters Cyberpunk Review 8 Ball Pool Multiplayer - Pool Games at Miniclip Aim Power Use arrows or click on the ball to add spin Best trickshots #17! 8 Ball Pool is the biggest & best multiplayer Pool game online! Join the Official 8 Ball Pool Forum! Add 8 Ball Pool to Your WebsiteHelp Steampunk Cities: Altered Reality Art &amp; Photography | Designs &amp; Ideas on Dornob Composite creations, these surrealistic structures and miniature urban landscapes are made from real photographs. The so-called Habitat Machines and Industrial Parkland series by David Trautrimas appropriate everyday housewares – from pots and pans to faucets and fans – in fantastical Steampunk-esque city-scapes. In everything from individual buildings to entire neighborhoods, this approach incorporates technologies with which we are naggingly familiar – even when they are not always easy to recognize when first viewing one these curious artworks. As with Steampunk, the art is in the the remix. As cues to their origins, names are assigned to these projects including: Waffle Iron Heights, Oil Can Residence, Vacuum Tower, Hole Punch Flats, Space Heater Place, Razor Cooperative, Film Projector Factory, The Fishing Complex and The Measurement District. By shifting the scale and editing the details of this ordinary objects, this artist taps into patterns we recognize from our everyday lives.

The Venus Project Epigenetics One example of an epigenetic change in eukaryotic biology is the process of cellular differentiation. During morphogenesis, totipotent stem cells become the various pluripotent cell lines of the embryo, which in turn become fully differentiated cells. In other words, as a single fertilized egg cell – the zygote – continues to divide, the resulting daughter cells change into all the different cell types in an organism, including neurons, muscle cells, epithelium, endothelium of blood vessels, etc., by activating some genes while inhibiting the expression of others.[5] Historical usage of "epigenetics"[edit] The term "epigenetics" has also been used in developmental psychology to describe psychological development as the result of an ongoing, bi-directional interchange between heredity and the environment.[13] Interactivist ideas of development have been discussed in various forms and under various names throughout the 19th and 20th centuries. Contemporary usage of "epigenetics"[edit]