The Habitable Planet: A Systems Approach to Environmental Science 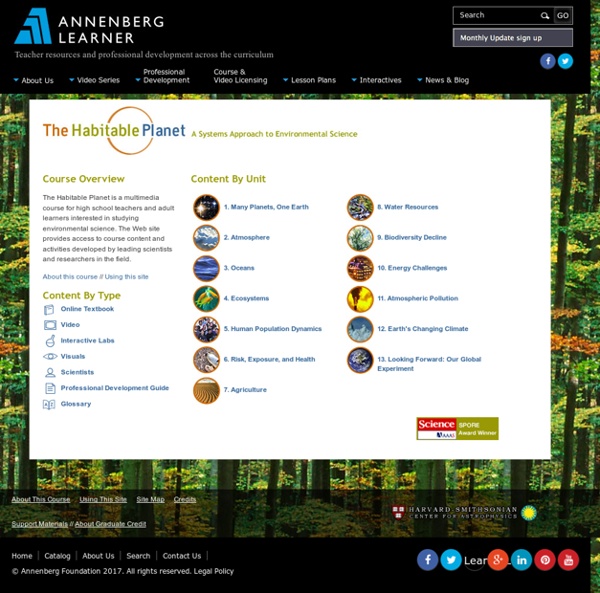 Click4Biology Models | Joint Global Change Research Institute Staff at the Joint Institute develop and use models to simulate the economic and physical impacts of global change policy options. The GCAM, for example, gives analysts insight into how regional and national economies might respond to climate change mitigation policies including carbon taxes, carbon trading, and accelerated deployment of energy technology. Phoenix - Phoenix is a global, dynamic recursive computable general equilibrium model that is solved in five-year time steps from 2005 through 2100 and divides the world into twenty-four regions.

Biology teacher support IA material This teacher support material is designed to support new and experienced teachers in the application of the internal assessment criteria for the group 4 courses. The criteria can be found in the Diploma Programme Biology guide, Chemistry guide and Physics guide (published March 2007). The first part has three sections of general guidance for teachers. The second part shows the application of the criteria in the assessment of practical work.

Greenhouse Gas We hear a lot about Greenhouse gas, but what is this? Why do these gases pose such a problem? Our atmosphere is a layer surrounding the earth held in place by gravity and primarily made up of Nitrogen (78%), Oxygen (21%), with water vapor and various gases making up the remainder. It is on the ‘remainder’ that we will focus as it is the concentrations of these trace gases that cause the greenhouse gas problem. Scientists now realize that the proportion of these gases has increased significantly over a few hundred years. You can see from the graph below that carbon dioxide, nitrous oxide and methane have all increased significantly since the 1800s. The Greenhouse Blanket Ok… You see how these gases have increased proportionally in our atmosphere, but perhaps you are thinking, so what? To explain why these gases are termed greenhouse gases, we need to understand that during the day the earth absorbs heat from the sun, although much of this is radiated back out into space. The Big Issue

Green Capitalism: The God That Failed (Image: Jared Rodriguez / Truthout) The results are in: No amount of "green capitalism" will be able to ensure the profound changes we must urgently make to prevent the collapse of civilization from the catastrophic impacts of global warming. The following is an updated version of an article that originally was published in the Real-World Economics Review. We consider Richard Smith's article foundational to understanding the world we live in. As soaring greenhouse gas (GHG) emissions drove global CO2 concentrations past 400 parts per million in May 2013, shell-shocked climate scientists warned that unless we urgently adopt "radical" measures to suppress GHG emissions (50 percent cuts in emissions by 2020, 90 percent by 2050) we're headed for an average temperature rise of 3 degrees or 4 degrees Celsius before the end of the century. All such market-based efforts are doomed to fail, and a sustainable economy is inconceivable without sweeping systemic economic change.