Here's how we're growing meat in labs instead of in animals. Today, many companies, research institutes, and non-profit organizations are developing cultured meats and fish products—but what exactly is cultured meat? 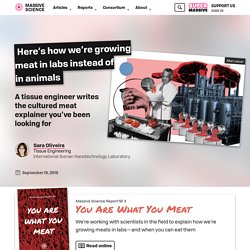 Cultured meat will hopefully look and taste like conventional meat from animal tissue. The difference is that the cells making up cultured meat are not grown inside of an animal. Instead, the cells are allowed to grow in culture flasks or larger systems for growing individual cells in a lab. When those cells grow unstructured they can mimic ground meat products like sausages, hamburgers, and chicken nuggets. Genetics Breakthrough Gives Sustainable Biofuels A Big Boost. Researchers at the Enterprise Rent-A-Car Institute for Renewable Fuels at the Donald Danforth Plant Science Center have discovered a gene that influences grain yield in grasses related to food crops. 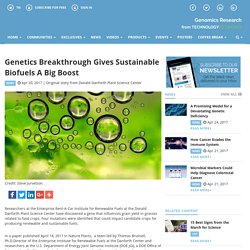 Four mutations were identified that could impact candidate crops for producing renewable and sustainable fuels. In a paper published April 18, 2017 in Nature Plants, a team led by Thomas Brutnell, Ph.D.Director of the Enterprise Institute for Renewable Fuels at the Danforth Center and researchers at the U.S. Department of Energy Joint Genome Institute (DOE JGI), a DOE Office of Science User Facility, conducted genetic screens to identify genes that may play a role in flower development on the panicle of green foxtail. Green foxtail is a wild relative of the common crop foxtail millet. Are microbes the next revolution coming to Big Ag? Walk into your typical U.S. or U.K. grocery store and feast your eyes on an amazing bounty of fresh and processed foods. 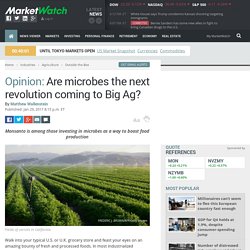 In most industrialized countries, it’s hard to imagine that food production is one of the greatest challenges we will face in the coming decades. By the year 2050, the human population is projected to grow from 7.5 billion to nearly 10 billion. Lab-Grown Meat Is Healthier. It's Cheaper. It's the Future. In Brief Since 2013, the price of lab-grown meat has dropped from around $325,000 for five ounces to just $11.36, making it 30,000 times cheaper than it was previously.Not only could lab-grown meat help us eradicate global famine, it's also better for the environment than traditional meat production. 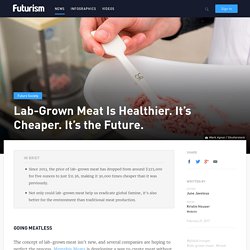 Going Meatless. Microbial Nanowires Make for “Green” Electronics. The inner workings of that new cell phone or tablet could be made from bacteria in the not so distant future, as investigators from the University of Massachusetts Amherst just reported about a new type of natural wire produced by bacteria that could greatly accelerate the development of sustainable "green" conducting materials for the electronics industry. 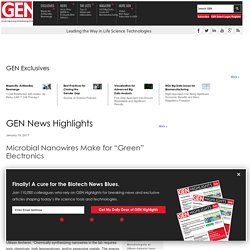 Silicone caulk, commercial sealants, are mainly composed of organosilicon compounds.WIKIMEDIA, ACHIM HERINGSilicon is one of the most abundant elements on Earth, and silicon-carbon compounds are crucial for pharmaceutical development and computer technology. Yet “no living organism is known to put silicon-carbon bonds together,” said Jennifer Kan, a postdoc at Caltech, in a press release. Now, a November 24 Science study coauthored by Kan has shown that living Rhodothermus marinus cells can be coaxed into manufacturing these coveted bonds. Nourrir la « smart city » de demain grâce à l’agriculture cellulaire. Fashion's Biological Future Is Now  In an industry notorious for transience, flux and experimentation, it’s counterintuitive to consider that the fashion system is stuck in a rut when it comes to materials and real sustainability. 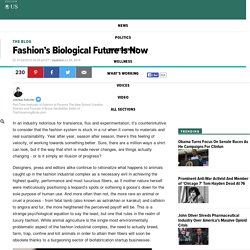 Year after year, season after season, there’s this feeling of velocity, of working towards something better. Sure, there are a million ways a shirt can look, but if the way that shirt is made never changes, are things actually changing - or is it simply an illusion of progress? Designers, press and editors alike continue to rationalize what happens to animals caught up in the fashion industrial complex as a necessary evil in achieving the highest quality, performance and most luxurious fibers, as if mother nature herself were meticulously positioning a leopard’s spots or softening a goose’s down for the sole purpose of human use. Leather without cows? Shearling without sheep, silk without spiders and furs without foxes? Smartphones Could Soon Have Plant-Made Parts. Normally, when we think of mining for precious metals, we imagine dark, cramped caves or holes in the ground which are a bit of an eyesore. 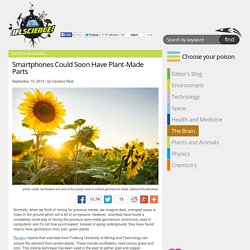 However, scientists have found a completely novel way of mining the precious semi-metal germanium (commonly used in computers) and it's not how you'd expect. Instead of going underground, they have found how to mine germanium from lush, green plants. Reuters reports that scientists from Freiburg University of Mining and Technology can extract the element from certain plants. Angela Belcher : Utiliser la nature pour faire pousser des batteries. Artificial Photosynthesis Yields Valuable Chemicals. Tiny semiconductors and bacteria have been combined to create a system that uses sunlight to turn carbon dioxide into valuable chemicals. 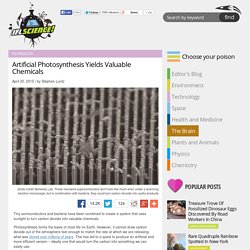 Photosynthesis forms the basis of most life on Earth. However, it cannot draw carbon dioxide out of the atmosphere fast enough to match the rate at which we are releasing what was stored over millions of years. This has led to a quest to produce an artificial and more efficient version – ideally one that would turn the carbon into something we can easily use. Activation d'enzymes bactériennes pour convertir le CO2 en source d'énergie renouvelable. Exploiting Bacteria to Produce "Living Materials" A group of researchers at the Massachusetts Institute of Technology have unveiled a system whereby bacterial cells are engineered in such a way that they incorporate specific non-living materials into their biofilms, creating a "living material". 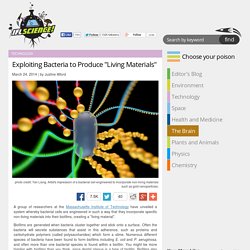 Biofilms are generated when bacteria cluster together and stick onto a surface. Often the bacteria will secrete substances that assist in this adherence, such as proteins and carbohydrate polymers (called polysaccharides) which form a slime. Numerous different species of bacteria have been found to form biofilms including E. coli and P. aeruginosa​, and often more than one bacterial species is found within a biofilm. You might be more familiar with biofilms than you think, since dental plaque is a type of biofilm. Microbes are "the factories of the future" Scientists Engineer Bacteria To Produce A Renewable Biofuel.