LittleSis - Profiling the powers that be 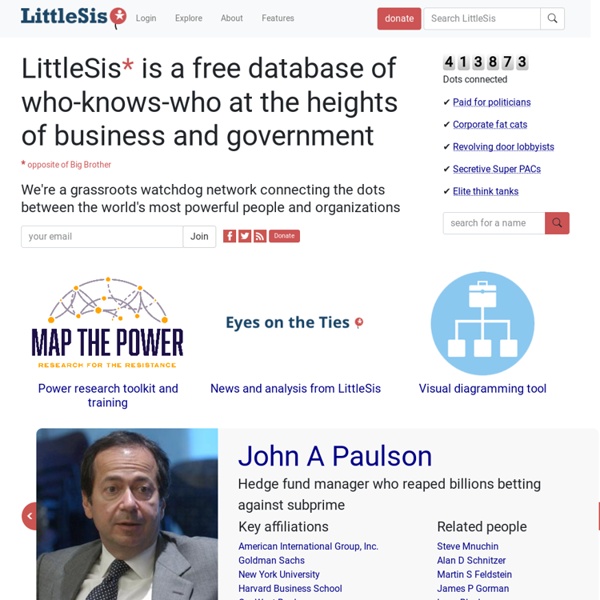 Art terms: The ultimate artist's glossary creativebloq Art terms are a fundamental part of creating art because they summarise complicated concepts succinctly. And given that the terminology is used by course instructors and educational books across the board, it’s a good idea to get yourself familiar with them if you want to further your skills. After all, even if you’ve picked up the best pencils for artists, they can only take you so far if you don’t know how to get the most out of them. Data Visulization Course Materials This resource page features course content from the Knight Center for Journalism in the America's massive open online course (MOOC), titled "Data Visualization for Storytelling and Discovery." The four-week course, which was powered by Google, took place from June 11 to July 8, 2018. We are now making the content free and available to students who took the course and anyone else who is interested in learning how to create data visualizations to improve their reporting and storytelling. The course was taught by Alberto Cairo, He created and curated the content for the course, which includes video classes and tutorials, readings, exercises, and more.

Booz Allen, the World's Most Profitable Spy Organization How this week's cover got madeIn 1940, a year before the attack on Pearl Harbor, the U.S. Navy began to think about what a war with Germany would look like. The admirals worried in particular about the Kriegsmarine’s fleet of U-boats, which were preying on Allied shipping and proving impossible to find, much less sink. Stymied, Secretary of the Navy Frank Knox turned to Booz, Fry, Allen & Hamilton, a consulting firm in Chicago whose best-known clients were Goodyear Tire & Rubber (GT) and Montgomery Ward.

Florence Nightingale is a Design Hero - Nightingale - Medium Founder of modern nursing. Feminist champion. Celebrity entrepreneur. NameBase NameBase is a web-based cross-indexed database of names that focuses on individuals involved in the international intelligence community, U.S. foreign policy, crime, and business. The focus is on the post-World War II era and on left of center, conspiracy theory, and espionage activities.[1] In the 1980s, through his company Micro Associates, he sold subscriptions to this computerized database, under its original name, Public Information Research, Inc (PIR). At PIR's onset, Brandt was President of the newly formed non-profit corporation and investigative researcher, Peggy Adler, served as its Vice President.

SEC Goldman Lawyer Says Agency Too Timid on Wall Street Misdeeds A trial attorney from the Securities and Exchange Commission said his bosses were too “tentative and fearful” to bring many Wall Street leaders to heel after the 2008 credit crisis, echoing the regulator’s outside critics. James Kidney, who joined the SEC in 1986 and retired this month, offered the critique in a speech at his goodbye party. His remarks hit home with many in the crowd of SEC lawyers and alumni thanks to a part of his resume not publicly known: He had campaigned internally to bring charges against more executives in the agency’s 2010 case against Goldman Sachs Group Inc.

Poison Pill ID: Welcome to Pill ID Use our Pill Identifier to figure out: What's this pill I just found in my teen's pocket?Was my prescription filled correctly? It looks different.My pills are mixed up. Which pill should I take? How to Filter in R: A Detailed Introduction to the dplyr Filter Function Data wrangling. It’s the process of getting your raw data transformed into a format that’s easier to work with for analysis. It’s not the sexiest or the most exciting work.