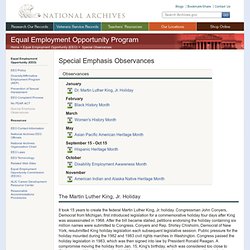 Holiday It took 15 years to create the federal Martin Luther King, Jr. holiday. Congressman John Conyers, Democrat from Michigan, first introduced legislation for a commemorative holiday four days after King was assassinated in 1968. After the bill became stalled, petitions endorsing the holiday containing six million names were submitted to Congress. Conyers and Rep. A number of states resisted celebrating the holiday. This holiday, which occurs on the third Monday in January each year, was established to serve as a time for Americans to reflect on the principles of racial equality and nonviolent social change espoused by Dr. 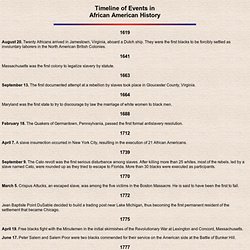 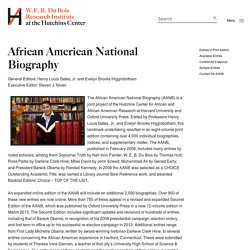 Niven The African American National Biography (AANB) is a joint project of the Hutchins Center for African and African American Research at Harvard University and Oxford University Press. Edited by Professors Henry Louis Gates, Jr., and Evelyn Brooks Higginbotham, this landmark undertaking resulted in an eight-volume print edition containing over 4,000 individual biographies, indices, and supplementary matter. The AANB, published in February 2008, includes many entries by noted scholars, among them Sojourner Truth by Nell Irvin Painter; W. E. An expanded online edition of the AANB will include an additional 2,000 biographies. The expanded AANB has also allowed us to capture some of the less well-known, but fascinating, characters in African American history. The AANB continues to look for writers for entries to appear in regular updates to its online edition.