Understanding The Aramaic Prayer To Our Father. Understanding The Aramaic Prayer To Our Father Several days ago at Winter Solstice, this Christmas Season, 2006, I was asked by a sponsee about my struggle over the years to understand the full meaning of the Paternoster, so below is the explanation of my findings relative to "the evil" or "evil one" and to the word "sin" which seemed in opposition to my stated belief that if this "Higher Power", a "Father in Heaven" was Omnipotent – All Powerful, Omniscient – All Knowing, and Omni-present – Present in all things, then could there be an opposite???? 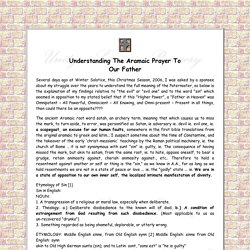 The ancient Aramaic root word satah, an archery term, meaning that which causes us to miss the mark, to turn aside, to error, was personified as Satan, ie adversary ie. devil ie. evil one, ie. a scapegoat, an excuse for our human faults, somewhere in the first bible translations from the original aramaic to greek and latin... Etymology of Sin [1] Sin in English: NOUN: 1. Gresham's Law & Alcoholics Anonymous. Click The Images To Go To Page Indicated In The Flag Gresham's Law - "Bad currency drives out good" - has been operative in the life of Alcoholics Anonymous. 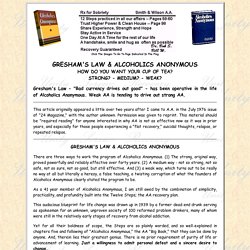 Weak AA is tending to drive out strong AA. This article originally appeared a little over two years after I came to A.A. in the July 1976 issue of "24 Magazine," with the author unknown. Permission was given to reprint. This material should be "required reading" for anyone interested in why AA is not as effective now as it was in prior years, and especially for those people experiencing a "flat recovery," suicidal thoughts, relapse, or repeated relapse. There are three ways to work the program of Alcoholics Anonymous. (1) The strong, original way, proved powerfully and reliably effective over forty years. (2) A medium way - not so strong, not so safe, not so sure, not so good, but still effective.

That short paragraph was a stroke of inspiration, especially the phrase, "We are not saints. " A.A. History - The Evolution of Alcoholics Anonymous, by Jim Burwell. Jim Burwell was one the first members of A.A. to get sober in New York. 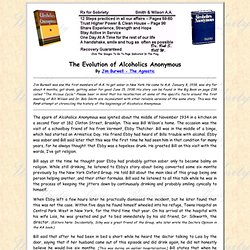 He came to A.A. January 8, 1938, was dry for about 4 months, got drunk, getting sober for good June 15, 1938. His story can be found in the Big Book on page 238 called "The Vicious Cycle. " Please bear in mind that his recollection of some of the specific facts around the first meeting of Bill Wilson and Dr. Bob Smith are inconsistent with other reliable versions of the same story. The spark of Alcoholics Anonymous was ignited about the middle of November 1934 in a kitchen on a second floor at 182 Clinton Street, Brooklyn.

Bill says at the time he thought poor Ebby had probably gotten sober only to become balmy on religion. When Ebby left a few hours later he practically dismissed the incident, but he later found that this was not the case. A few hours later when the doctor came in, he felt a tremendous elation and said, Doc, I’ve got it. When Henrietta and Bill got to Dr. People in AA History. People in AA History (Many thanks go out to Archie M., who originally compiled most of this!!! 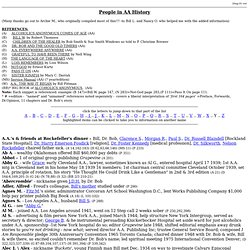 -to Bill L. and Nancy O. who helped me with the added information) REFERENCES:(A) ALCOHOLICS ANONYMOUS COMES OF AGE (AA)(B) BILL W. by Robert Thomsen(C) CHILDREN OF THE HEALER by Bob Smith & Sue Smith Windows as told to P. Christine Brewer(D) DR. A.A. History - Jimmy B. - The Aetheist - After 19 Years. Jimmy B. -- Jim BurwellThe Agnostic and Author Of "The Vicious Cycle" Jim Burwell's influence on Bill Wilson in the writing of the Big Book was described by Wilson himself in Alcoholics Anonymous Comes of Age. 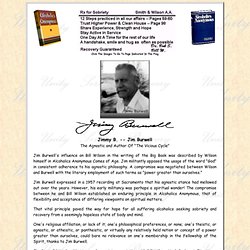 Jim militantly opposed the usage of the word "God" in consistent adherence to his agnostic philosophy. A compromise was negotiated between Wilson and Burwell with the literary employment of such terms as "power greater than ourselves. " Jim Burwell expressed in a 1957 recording at Sacramento that his agnostic stance had mellowed out over the years. However, his early militancy was perhaps a spiritual wonder! That vital principle paved the way for hope for all suffering alcoholics seeking sobriety and recovery from a seemingly hopeless state of body and mind. History of Alcoholics Anonymous. Alcoholism in the 1930s[edit] In post-Prohibition 1930s America, it was common to perceive alcoholism as a moral failing, and the medical profession standards of the time treated it as a condition that was likely incurable and lethal.[2] Those without financial resources found help through state hospitals, the Salvation Army, or other charitable and religious groups. 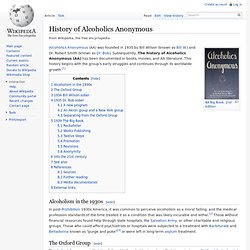 Those who could afford psychiatrists or hospitals were subjected to a treatment with Barbiturate and Belladonna known as "purge and puke"[3] or were left in long-term asylum treatment. The Oxford Group[edit] The Oxford Group was a Christian fellowship founded by American Christian missionary Dr. Franklin Nathaniel Daniel Buchman. Buchman summed up the group's philosophy in a few sentences: "All people are sinners"; "All sinners can be changed"; "Confession is a prerequisite to change"; "The change can access God directly"; "Miracles are again possible"; and "The change must change others 1934 Bill Wilson sober[edit]