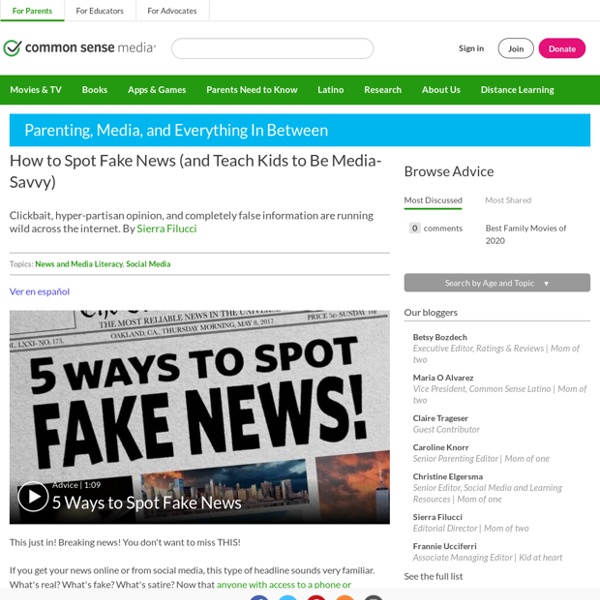 How to Spot Fake News Fake news is nothing new. But bogus stories can reach more people more quickly via social media than what good old-fashioned viral emails could accomplish in years past. Concern about the phenomenon led Facebook and Google to announce that they’ll crack down on fake news sites, restricting their ability to garner ad revenue. Perhaps that could dissipate the amount of malarkey online, though news consumers themselves are the best defense against the spread of misinformation. Not all of the misinformation being passed along online is complete fiction, though some of it is.

An ESL Reading lesson plan template I Had No Idea, too I’m always surprised when I get reader questions or talk to people preparing for their upcoming ESL job interviews that they don’t know how to make a basic lesson plan. But, it’s not so crazy I guess and I actually had no system of any sort until I took the CELTA course a few years back. How Photos Fuel the Spread of Fake News During a campaign stop in South Carolina last winter, Hillary Clinton stumbled as she climbed the steps of an antebellum mansion in Charleston. Aides helped her regain her balance in a vulnerable but nondescript moment captured by Getty photographer Mark Makela. He didn’t think much of it until August, when the alt-right news site Breitbart touted it as evidence of Clinton’s failing health. “It was really bizarre and dispiriting to see,” he says.

Lesson Idea: Media Literacy and Fake News Overview: In a world filled with rapid pace communication through a variety of platforms, we have an abundance of information available at our fingertips. Discerning fact from fiction can be complex. Knowing the source can be challenging, and the messages being delivered can be received in different ways, effecting certain populations of people as well as our country. View the videos in this lesson with your students to cultivate an understanding of media literacy and engage in a discussion about its impact and significance for the future. Procedure:

Fake News Or Real? How To Self-Check The News And Get The Facts : All Tech Considered Guido Rosa/Getty Images/Ikon Images Fake news stories can have real-life consequences. On Sunday, police said a man with a rifle who claimed to be "self-investigating" a baseless online conspiracy theory entered a Washington, D.C., pizzeria and fired the weapon inside the restaurant. Protect Yourself from Fake News - Fact v. Fiction - Fake News - Academic Guid... Here are some steps you can take to become a critical news consumer: Determine what type of article you are reading Is it an editorial or opinion piece?

How to identify fake news The illustration above, which shows reporters carrying various forms of fake news, was published way back in 1894 by pioneering cartoonist Frederick Burr Opper. He would have been blissfully unaware at the time of its creation, but he had just uncovered a powerful phrase that, 123 years later, would become word of the year for 2017 and which would define the credibility and legitimacy of the news, mass media and journalism throughout the 21st century. Rubber Duck Media explains below how to identify fake news and what can be done to prevent it spreading further and doing more damage. The dissemination of fabricated information designed to mislead, push a narrative or agenda, or to simply attract attention for its own sake, is not a new concept by any means.

After Comet Ping Pong and Pizzagate, teachers tackle fake news History teacher Chris Dier was in the middle of a lesson last week at Chalmette High School in Chalmette, La., when a student made a befuddling inquiry: “He raised his hand and asked if I knew about Hillary Clinton using pizza places to traffic people.” About a thousand miles away at Wilson High School in Northwest Washington, distressed students in teacher Eden McCauslin’s history and government classes asked why a North Carolina man armed with an assault rifle had appeared at their local pizza shop, Comet Ping Pong, telling police that he wanted to free child sex slaves he believed to be harbored there, a false narrative conspiracy theorists have pushed on the Internet. [Pizzagate: From rumor, to hashtag, to gunfire in D.C.] Hoaxes, fake news and conspiracy theories have abounded on the Web, spreading with increasing speed and intensity during the recent presidential election cycle. As the Comet Ping Pong incident displayed, such false accounts can inspire very real consequences.