Fake News, Mass Hysteria and Induced Insanity. The "fake news" is that we've never been healthier, healthcare costs are under control and our economy has fully "recovered. 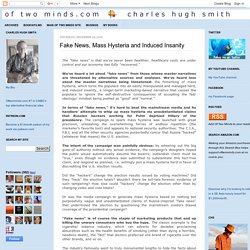 " We've heard a lot about "fake news" from those whose master narratives are threatened by alternative sources and analyses. Washington Post Published Fake News Story About a Vermont Utility Getting Hacked by Russians. Robert Parry: Obama Administration & Its Neo-Con Allies Create Ministry of Truth — Taxpayers Now Funding USG War Against US Citizens Seeking to Tell the Truth… « Public Intelligence Blog. Robert Parry The War Against Alternative Information The U.S. government is creating a new $160 million bureaucracy to shut down information that doesn’t conform to U.S. propaganda narratives, building on the strategy that sold the bloody Syrian “regime change” war, writes Rick Sterling. 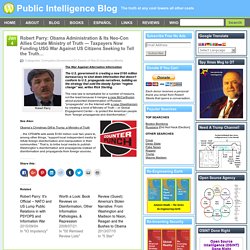 The CIA & The Media: 50 facts The World Should Know – Collective Evolution. The Deep State Goes to War With President-Elect, Using Unverified Claims, as Democrats Cheer. In January 1961, Dwight Eisenhower delivered his farewell address after serving two terms as U.S. president; the five-star general chose to warn Americans of this specific threat to democracy: “In the councils of government, we must guard against the acquisition of unwarranted influence, whether sought or unsought, by the military-industrial complex. 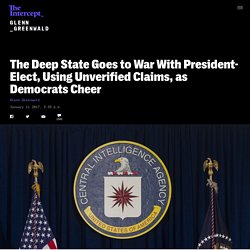 The potential for the disastrous rise of misplaced power exists and will persist.” That warning was issued prior to the decadelong escalation of the Vietnam War, three more decades of Cold War mania, and the post-9/11 era, all of which radically expanded that unelected faction’s power even further. This is the faction that is now engaged in open warfare against the duly elected and already widely disliked president-elect, Donald Trump. They are using classic Cold War dirty tactics and the defining ingredients of what has until recently been denounced as “Fake News.” How 4Chan McFooled John McCain, Buzzfeed, and the CIA Into Believing Trump's Golden Showers.

Ok, there is a lot to go through with this story, which is going to end up being one of the biggest embarrassments for Buzzfeed, the CIA, and old man McCain ever. 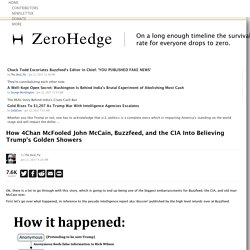 First let's go over what happened, in reference to the pesudo intelligence report aka 'dossier' published by the high level retards over at Buzzfeed. I know this appears to be unbelievable, but it's all verifiable. The neocon shill of a reporter from Buzzfeed, Rick Wilson, was catfished by some autist from the Hitler loving 4chan message boards and made to believe Trump enjoyed getting urinated on and all sorts of outlandish stuff. Truly, this is incredible. Let me post some screen shots. That right there is the head of Buzzfeed explaining why he published a dodgy report of utter nonsense that was, apparently, fished around to other news agencies and summarily rejected -- because it's retard level was too high even for The NY Times. Wikileaks calls bullshit on the report. We Do Not Live in a “Post Truth” World, We Live in a World of Lies and We Always Have. We do not live in a “post-truth” world, neither in the Middle East nor in the West – nor in Russia, for that matter. 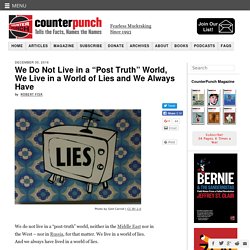 We live in a world of lies. And we always have lived in a world of lies. Just take a look at the wreckage of the Middle East with its history of people’s popular republics and its hateful dictators. They feast on dishonesty, although they all – bar the late Muammar al-Gaddafi – demand regular elections to make-believe their way back to power. Now, I suppose, it is we who have regular elections based on lies. And look at Israel. I suspect that “post-truth” has more to do with social media than mendacious elections. CIA Training Handbook: How to Fake Intelligence Plus Case Study on Faking Russians Hacking US Election « Public Intelligence Blog. Click on Image to Enlarge WARNING NOTICE: Exclusively for Directorate of Operations Covert Action Staff (DO/CAS) Employees Identified by Name within Sensitive Compartmented Information (SCI) List FKTRUMP. 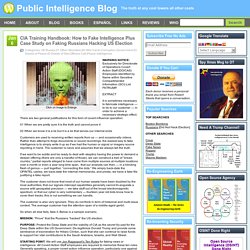 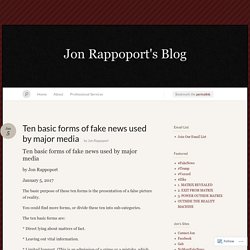 You could find more forms, or divide these ten into sub-categories. The ten basic forms are: * Direct lying about matters of fact. * Leaving out vital information. * Limited hangout. . * Shutting down the truth after publishing it—includes failing to follow up and investigate a story more deeply. No More Fake News Jon Rappoport Investigative Reporter. Why fake news matters. Why fake news matters Notes on major media blowing away in the wind by Jon Rappoport January 12, 2017 For the past 34 years, I’ve been working as a reporter, in order to expose fake news. 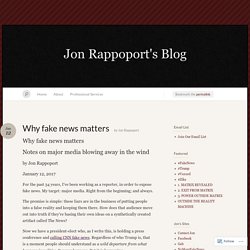