[AT] The Documentary Network 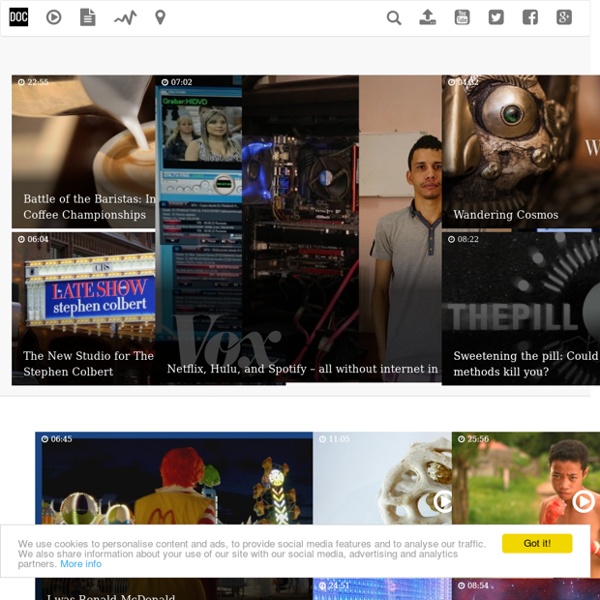 [US] Films & Vidéos / UBUWeb The following films are presented for educational and non-commercial use only. All copyrights belong to the artists. About UbuWeb Film & Video UbuWeb is pleased to present thousands of avant-garde films & videos for your viewing pleasure. However, it is important to us that you realize that what you will see is in no way comparable to the experience of seeing these gems as they were intended to be seen: in a dark room, on a large screen, with a good sound system and, most importantly, with a roomful of warm, like-minded bodies. However, we realize that the real thing isn't very easy to get to.

Documentaries about Communication Trouble in Amish Paradise Category: Society Two radical Amish men, Ephraim and Jesse Stoltzfus, of the Old Order Amish of Lancaster County, Pennsylvania, begin to question some of the most fundamental aspects of their culture, facing excommunication from [...] Heidegger: Thinking the Unthinkable German philosopher Martin Heidegger addressed the central question of human existence full on, by examining how human self-awareness depends on concepts of time and death. His preoccupation with ontology - the form of metaphysical inquiry concerned with the study of existence itself - dominated his work. The central idea of his complex Sein und Zeit (Being and Time) (1927) could be summed up in the phrase 'being is'. Man had to ask himself 'what is it to be?' and only by doing this, and standing back from absorption into objects and other distractions, could he actually exist. For Heidegger, the constant fear of death and the anxieties of life helped man to ask this central question – the mystery of life was intimately linked to the individual's confrontation and consideration of the temporary nature of their own existence.

A Place at the Table Synopsis 50 million people in the U.S.—one in four children—don’t know where their next meal is coming from, despite our having the means to provide nutritious, affordable food for all Americans. Directors Kristi Jacobson and Lori Silverbush examine this issue through the lens of three people who are struggling with food insecurity: Barbie, a single Philadelphia mother who grew up in poverty and is trying to provide a better life for her two kids; Rosie, a Colorado fifth-grader who often has to depend on friends and neighbors to feed her and has trouble concentrating in school; and Tremonica, a Mississippi second-grader whose asthma and health issues are exacerbated by the largely empty calories her hardworking mother can afford. Related Links Stay Informed & Take Action | Press Materials

166 Documentaries To Expand Your Consciousness By: Higher Perspective Here is a list of over 100 documentaries you can watch for free online. They are about Science, Consciousness, ETs, you name it. It’s a smorgasbord of fascinating subjects to learn about. If you find a dead link please let us know and we will find another to replace it. Enjoy! [US] Collection de films / Internet Archive movies eye favorite 21 comment 3 Charlie Chaplin's 58th Film Released Dec. 04 1916 The Rink was Charlie Chaplin's 8th film for Mutual Films. It co-starred Edna Purviance, Eric Campbell, Henry Bergman and Albert Austin.

The 30 Architecture Docs To Watch In 2013 With awards season in full swing, Hollywood’s sparkly razamtaz occupies our television screens. But what about the unsung, architectural heros of film? What about the films that are less ‘Schindler’s List’ and more ‘Schindlers Hauser’, less ‘Wrath Of Kahn’ and more ‘Louis Kahn’. We look past the panoply of stars to bring you 30 of the best Architecture Documentaries which will provoke, intrigue and beguile in 2013. Feature-length Documentaries (in alphaetical order)… 1. Watch WE THE ECONOMY Online Free – Viewster Everyone is talking about the economy, but who can explain it? From that morning cup of coffee to your monthly mortgage payment, the economy affects every aspect of our lives, yet many Americans don’t understand the basic drivers of our economic system. We’re caught between bubbles and recessions, rising costs and dwindling paychecks, Main Street and Wall Street – a whirl of dollars and not much sense.

Kids Crafts - Inspiration for Children of all Ages Bunting is a quick and fun way to decorate the house or classroom for any occasion. It also... It is amazing what fun can be had and what can be created from a few basic ingredients. We have... Decorating lanterns and candles is great fun for older children. They make lovely gifts or... [US] Archives Prelinger / Internet Archive by Castle Films movies eye

Weird, weirder and weirdest documentaries list What is it about? It provides a look at the "Hell House" performed annually in October by the youth members of Trinity Church (Assemblies of God) in Cedar Hill, Texas (a Dallas suburb) - seen by over 10,000 visitors each year. We see the organization and planning of the event - including auditions, construction, scripting and rehearsals - largely through the involvement of one family: a single father with 4 children (one of whom suffers from cerebral palsy) including his daughter, a cast member. Hell houses are haunted attractions typically run by American, fundamentalist Christian churches or parachurch groups. These depict sin, the torments of the damned in Hell, and usually conclude with a depiction of heaven.

56 Honeydew Place Ninderry Qld 4561 - House for Rent #410961211 Date Available: Available Now 56 Honeydew Place Ninderry This home is a must see!! 25 Easy Art Techniques for Preschoolers It’s no secret – my daycare hooligans love creating art! For me, the funnest thing about art for kids, is finding unique and interesting ways for my toddlers and preschoolers to get creative. The kids and I have tried a lot of creative processes over the years, and today, I’m sharing with you, 25 easy art techniques for kids! They’re easy, inexpensive, super-cool, and each of these projects can be done using things you have in your kitchen cupboards and around your home! Put away those paints and paintbrushes! This round-up of creative art processes will have your kids exploring and experimenting with all kinds of different materials, substances and tools!