Instead of TV, you should watch...: Archive 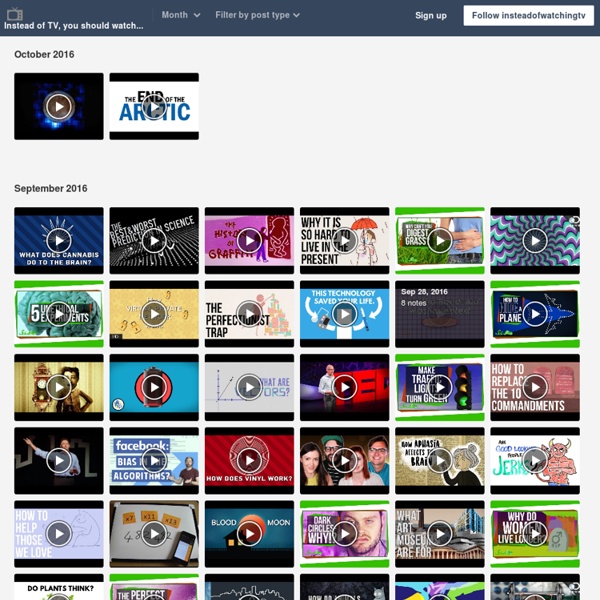 Educational Videos: 197 Educational YouTube Channels You Should Know About - InformED : TeacherTube - Teach the World Must Watch Documentaries About The U.S. Real Scientific Evidence of Controlled Implosion "The preconceived notion of NIST is that there's no evidence for explosives, as in there is no point in looking. That is the most unscientific thing which you can possibly think of. Not to look because you don't expect to find evidence and in fact the evidence is overwhelming. They state these conclusions for which there is no evidence and then they ignore conclusions that can be drawn from the evidence." -Lynn Margulis, PH.D, Scientist/Professor, University of Massachusetts War is All About Money and Control "There is a machine here that wants to go to war. A Brief Look at the New TSA The newly rolled out full body scanning machines at airports do not only pose a huge privacy concern, but they also present a major health concern because of the significant amounts of radiation they emit. The Truth About Globalization "I've met a lot of terrorists, I've interviewed them for books, I've never met one who wanted to be a terrorist. Evil is REAL

Learning English - Home Web of Stories uWall.tv | Listen to a Wall of Music © 2021 - Privacy - Terms ARKive - Discover the world's most endangered species Wildscreen's Arkive project was launched in 2003 and grew to become the world's biggest encyclopaedia of life on Earth. With the help of over 7,000 of the world’s best wildlife filmmakers and photographers, conservationists and scientists, Arkive.org featured multi-media fact-files for more than 16,000 endangered species. Freely accessible to everyone, over half a million people every month, from over 200 countries, used Arkive to learn and discover the wonders of the natural world. Since 2013 Wildscreen was unable to raise sufficient funds from trusts, foundations, corporates and individual donors to support the year-round costs of keeping Arkive online. As a small conservation charity, Wildscreen eventually reached the point where it could no longer financially sustain the ongoing costs of keeping Arkive free and online or invest in its much needed development. Therefore, a very hard decision was made to take the www.arkive.org website offline in February 2019.

videolectures.net - videolectures.net Documentary Tube – Watch Documentaries Online for FREE Authentic video in the classroom: Ireland II | Elisabeth Horn My second example of utilising authentic video in the EFL classroom is based on the same 50-minute travel video as my first. Of course, one can apply this to any video, but this time I will stick with Ireland. How I do it now will, however, differ from my last post because now I’ll concentrate on the language and vocabulary awareness in detail (but I wouldn’t use both methods on the same video in the same class, though). This approach is, however, associated with a lot of painstaking preparatory work for the teacher, because transcription of the video material needs to be done, at least for some of the clips. It takes about 1 hour to take down 5 minutes of video material, so one needs plenty of time to get a complete transcript. I’ve previously said that I use the gamification platform Didactor for most of my online material, and this is true for when I want the students to work with authentic video as well. The “game board” that the students start out with looks like this: 1. 2. 3.

Using digital video for cultural and linguistic awareness in ELT – an unofficial introduction | Elisabeth Horn Technology as such and technological skills in particular are not crucial for teachers to use digital video to enhance cultural and target language awareness in ELT. The main point is actually multitasking in the sense of the students using multiple senses simultaneously in order to absorb and handle the information given. Listening, reading, writing, speaking and even getting emotionally involved are at the centre of language learning. The simple passing on of the control of these buttons to the students enables them to take charge of their own viewing process, and thereby giving the teachers a multitude of possibilities to vary their approach of video in the classroom. Let’s take an example. Deep-fried Mars bars British food doesn’t enjoy the greatest reputation in the world, but at least it’s not boring, particularly here in Glasgow, Scotland.─ How can I help you? Jellied eels ─ Jellied eels… Not like lollies, eels! The full English breakfast The Cornish Pasty Tea and ballroom dancing