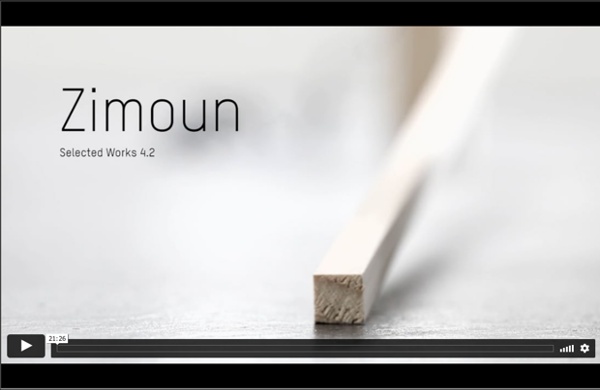 Vintage Soviet Posters & Propaganda Moor, Dimitri.1st of May - A Festival of Labor, 1920 Moor, Dimitri. Cossack - Who are you with, them or us?, 1920 Mathematically Precise Kinetic Sculptures and Transformable Objects by John Edmark If you enjoyed John Edmark’s trippy 3D-printed zoetrope sculptures last week, you might also enjoy some of his kinetic sculptures that rely on excruciatingly precise laser-cut wood and internal mechanisms to create optical illusions and other unexpected behaviors. Edmark describes these as “instruments that amplify our awareness of the sometimes tenuous relationship between facts and perception.” Here are three of my favorites, but you can see many more on his Vimeo page.

ikeduende.com Tamayo on Ikebana Ikebana is not just about flower arranging. Through the act of ikebana, you become involved in the process of terminating the life of a botanical creature, of discovering the beauty, mystery and power of plants, and the variety of possible outcomes is simply enormous! By creating a momentary art piece, ikebana instills in us a positive attitude, a fortitude and an ability to concentrate deeply. This is one way to enrich our lifestyle. Peerless Drawings of Karla Mialynne The artist Karla Mialynne lives and works in the United States. In order to create highly realistic drawings, she uses colored pencils, acrylic paints and markers. Carl puts her illustrations on her Instagram account.

We are all homeless: The "WE ARE ALL HOMELESS" Project - an introduction This project began in 1993 when I started buying and collecting signs from the homeless. (More on that in the description of the art show HOME?) Over the past few years I have developed art work using the signs, which became focused while I was pursuing an MFA in Arts & Technology at UTDallas. In the Fall 2009 semester we were challenged to develop an art project that would be interventionist in nature, meaning that it would cause some interruption in our daily lives, which resulted in the development of WE ARE ALL HOMELESS. It began as a series of "flash mob happenings," where a few dozen people holding up authentic homeless signs converged on an intersection or other public location (2009-2010).

Sila Sveta / Levitation For us it was an opportunity to experiment with no limitations and test technologies developed in-house by the studio itself. We produced special graphics and used an unconventional shooting angle to create an illusion of the dancer levitating in air. To create a smooth viewing experience, the project team led by Sila Sveta’s Art Director Arthur Kondrashenkov needed to define the best location for the camera, as well as the most suitable choreography and graphic imagery because the graphics and dance moves were designed simultaneously. You! Be Inspired! - Inspirations from Sketchbooks Articles February 1, 2015 UPDATE: This post was originally published on September 19, 2012. We’ve updated the links and added new artworks. Enjoy, Creatives! Most artists, designers, and illustrators start their design process from sketches on their sketchbooks.

Cybernetic Serendipity: A Documentation Bloomberg New Contemporaries 2016 23 Nov 2016 – 22 Jan 2017 Previously at the ICA - Exhibitions Cybernetic Serendipity Exhibition poster, Institute of Contemporary Art, 2 August – 20 October, 1968 © Cybernetic Serendipity Cybernetic Serendipity: A Documentation david hockney: me draw on iPad oct 11, 2011 david hockney: me draw on iPad copenhagen’s louisiana museum exhibited david hockney’s digital paintings in ‘me draw on iPad’ presented at the louisiana museum of modern art in copenhagen, ‘me draw on iPad‘ is an exhibition of the digital paintings created by british artist david hockney using the iPhone and iPad with the ‘brushes’ app. the installation includes 20 touch iPods and 20 iPads mounted along the walls, on each of which several paintings are exhibited on a sequential loop. a large-format triptych slide show directed by hockney displays additional works, while several projections showcase footage of hockney’s process and a start-to-finish animation playback of several pieces. over the course of the exhibition, hockney occasionally sent new iPad drawings via e-mail to be added to the show, illustrating an interesting potential that the digital medium offers for museum exhibition.

100 of the Best Street Art Photos for 2013 December 13, 2013 in Art, Painting, Street art As 2013 comes to a close, we’ve scoured the world to find the best street art created over the last couple of years. With so many great works produced during this time it was a tough job, but we needed to stop somewhere!

Related:
Related:  art & design   -  Coline Autres   -  Currently Looking Into   -  I am the Condom Fairy   -  Am I a Brainiac?   -  Caught Looking Good   -  Pan Am and KLM Airplane Crash - Tenerife   -  Articles I am interested in   -  WHERE AM I: REGIONS, CONTINENTS ETC.   -  Channel Homepage   -  stoptherobbery.com   -  Heidegger: Thinking the Unthinkable - Watch Free Documentary Online   -  Dailymotion - Watch, publish, share videos   -  The WebM Project | Welcome to the WebM Project   -  Binaural Beats « Get High Now (without drugs)   -  "The World in 2030" by Dr. Michio Kaku - YouTube   -  The Documentary Network - Watch amazing videos   -  Matheus Lopes | Escape Into Life   -  Alejandro Jodorowsky - Wikipedia, the free encyclopedia   -  Feeling Bored and Undereducated? Try Any of These 400 Free Online Courses! | Geekosystem   -  Yoga Poses for Better Sex - Yoga Poses That Improve Sex - Woman's Day   -  Albert Einstein- How I See the World - YouTube   -  50 Little-Known Ways Google Docs Can Help In Education | Edudemic   -  A Better Queue   -  KS2 Bitesize - Science   -  The men who crashed the world - YouTube   -  Ancient Aliens Debunked - (full movie) HD - YouTube   -  Malala Yousafzai, Girl Shot by Taliban, Was Drawn to Politics by Dad | TIME.com   -  How Can I Turn My Mess of Ideas Into Something Organized and Useful?   -  Why You Should Be Using an App Launcher (and How to Make It Do More Than Launch Apps)   -  Instead of TV, you should watch...: Archive   -  Cultcut   -  Easy Steps to Create Self Grading Assessment Using Google Forms ~ Educational Technology and Mobile Learning   -  One Stop Resource for Google Docs | doug --- off the record   -  Some Strange Things Are Happening To Astronauts Returning To Earth   -  50 Google Docs Tips Every Teacher should Know about   -  Movenote for Google Drive™ - Chrome Web Store   -  8 Things Every Teachers should Be Able to Do with Google Docs ~ Educational Technology and Mobile Learning   -  9 Steps to Create A Classroom Poster Using Google Docs ~ Educational Technology and Mobile Learning   -  Using Voice Comments with Google Docs for End of the Year Projects | Catlin Tucker, Honors English Teacher