50 Google Docs Tips Every Teacher should Know about 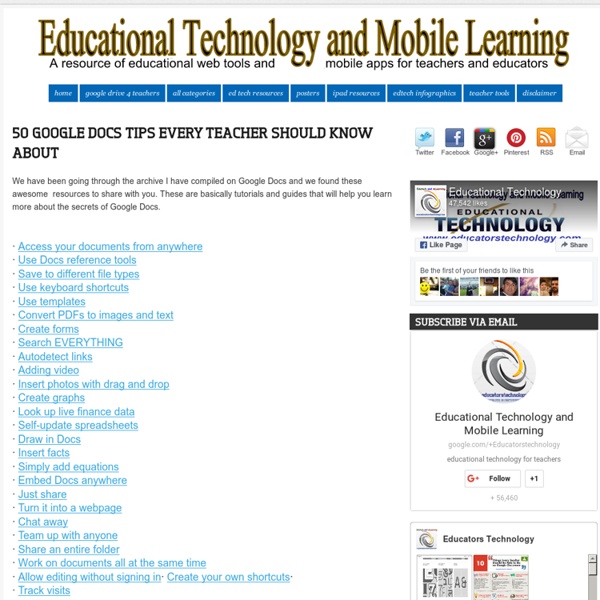 37inShare Google Docs ( Drive ) is an important component of your digital toolbox as a teacher and educator. I have been posting a lot on the importance of this service in education and Google Docs section here in Educational Technology and Mobile Learning has some great resources to help you start leveraging the potential of Docs in your teaching. I have been going through the archive I have compiled on Google Docs and I found these awesome resources to share with you.

Using Voice Comments with Google Docs for End of the Year Projects I had a “just in time” professional development moment thanks to Jennifer Roberts and her video titled “Docs Voice Comments.” I wanted to share it with other educators as I know many of us are planning end of the year projects, assignments, and written pieces. These culminating assignments are incredibly time consuming to grade. 50 "Best Practices" for language teachers 50 “Best Practices” For Language Teachers “It’s a funny thing. The more I practice, the luckier I get.” - Arnold Palmer Through practice and experience teachers get better. They get “luckier” in that the results of their classes are much better than those less experienced.

10 Ways to Use Google Maps in the Classroom By Jessica Sanders Google Maps is a great free tool for teachers to engage students. They’ll love mapping major novel moments, guessing locations based on clues, and investigating cities around the world. More: 20 Best Google Education Resources Create a Custom Map One Stop Resource for Google Docs If you’re a Google Docs user, curious about Google Docs, work with Google Docs with students, and especially if you’re looking for help understanding all of the features of Google Docs, then you’ve got to bookmark MaryFran’s Google Docs Tutorials. Created as a Google Site (of course), this is a huge collection of resources, tutorials, videos, … all devoted to helping the visitor understand the ins and outs of working with Google Docs. That’s really the best description I can think of to describe this site. Navigation and use is as simple and powerful as Google Docs itself. Just select a topic of interest from the left side navigation menu and read on. Screen captures are included along with complete descriptions of just what activity is being discussed.

10 Great Tools to Integrate with your Google Docs Since Google officially changed Google Docs name to Google Drive and a number of updates have been introduced to improve its overall performance. One very recent update is an increase of cloud storage capacity to 15GB usable across Gmail, Drive, and Google Plus. It is quite obvious that Google is trying to outsmart its immediate competitor Dropbox and I think Google is successful in its strategy so far. To make Google Drive stand out from the crowd, Google opened it to apps developers and allowed users to select from a wide variety of web apps to integrate into their Google Drive accounts. With the integration of these apps, users can now handle their files and documents ways not affordable by any other cloud storage tool out there. A Tutorial For Google Drive In The Classroom A Tutorial For Google Drive In The Classroom Tutorial by TeachThought Staff The use of cloud-based word processing and storage is among the most underrated examples of education technology. If literacy is the foundation of learning, tools that promote its integration can be considered equally foundational. Through the cloud, students, teachers, parents, and other stakeholders are able to access the same document. Comments can be added.

8 Strategies for Teaching Academic Language "Change your language and you change your thoughts." -- Karl Albrecht Understanding Academic Language Academic language is a meta-language that helps learners acquire the 50,000 words that they are expected to have internalized by the end of high school and includes everything from illustration and chart literacy to speaking, grammar and genres within fields. Think of academic language as the verbal clothing that we don in classrooms and other formal contexts to demonstrate cognition within cultures and to signal college readiness. There are two major kinds: instructional language ("What textual clues support your analysis?") and language of the discipline (examples include alliteration in language arts, axioms in math, class struggle in social studies and atoms in science).

Paperless Classroom? ePortfolios? Easily Accomplish Both with Google Docs! » Clint's Tech Integration Resources Permalink: UEN Faculty Lounge PPT or PDF versions Google facilitated the Education On Air Conference, a virtual conference for educators focused on and around Google Apps for Education, featuring their master teachers. I sat in on a few sessions – Managing Digital Portfolios w/ Google Tools from Kern Kelley, and The Paperless Classroom with Google Docs from Eric Curts. Both sessions were great, and both spelled out and reinforced a vital process or workflow for teachers and students to easily and successfully use Google Docs for every day work, for group projects, and for digital portfolios.

Scripts - New Visions CloudLab New Visions' Script Gallery Prior to March 2014 Apps Scripts for Google Sheets were installed and via a "locally-attached copy" made available to users through the "Script Gallery." Since then, Google has made big changes to scripts, most visibly by creating a new way of distributing them as Add-ons for Docs -- in which all users run from a single, developer-maintained copy of the codebase. Add-ons are now available for Google Docs, Sheets, and Forms through three respective galleries in the Chrome Web Store. 5 Ways to Make Class Discussions More Exciting Classroom discussions have been a staple of teaching forever, beginning with Socrates. I have taught using discussions, been a student in discussions, and observed other teachers' discussions thousands of times -- at least. Some have been boring, stifling or tedious enough to put me to sleep. Others have been so stimulating that I was sad to see them end. The difference between the two is obviously how interesting the topic is, but equally important is the level of student participation. It's not enough for students to simply pay attention -- they need to be active participants to generate one of those great discussions that end far too quickly for both the teacher and students.

11 Google Tricks That'll Change the Way You Search Google Search’s learning curve is an odd one. You use it every day, but still all you know is how to search. But the search engine has plenty of tricks up its sleeve. Convert Your PDF’s to Google Docs This Google Docs tip tells you how to convert a photo or PDF into a Google Doc. Earlier I blogged on annotating PDF’s being a bad lesson plan. I had suggested that at the very least to put the information into a Google Doc so students can collaborate around it and insert comments.